Exxon's $500,000 is in for a city hall; Mayflower plans include pavilion 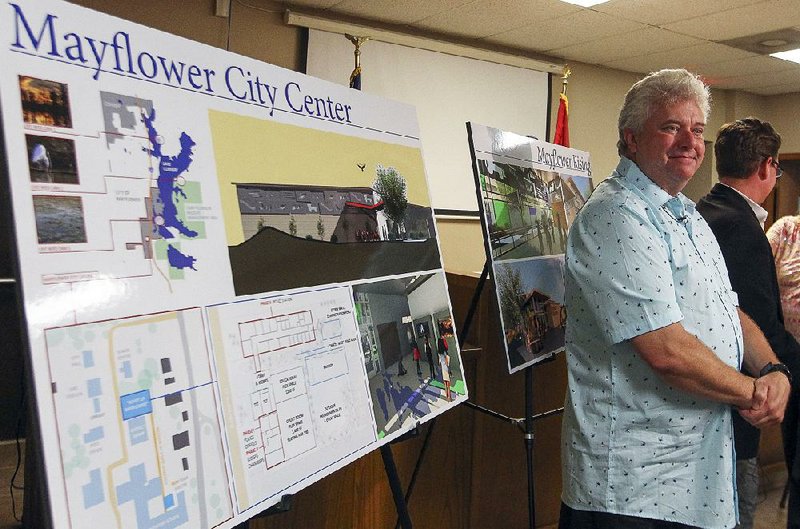 MAYFLOWER -- More than three years after an Exxon Mobil pipeline ruptured in a Mayflower subdivision, the oil giant on Wednesday paid $500,000 of the estimated $1.8 million to $2 million cost for the city to build a facility to house a new city hall and a nature pavilion aimed at educating schoolchildren and adults about the environment and the town's history.

"We've had a number of disasters, and it's time for us to come back," Mayor Randy Holland said, referring to the March 29, 2013, oil spill and to three tornadoes that have struck the Faulkner County town of about 2,500 residents in recent years.

"It's been one of the best days for Mayflower" and the county, he said after Exxon Mobil announced the payment, part of a consent decree approved in August by a federal judge. "I would never want any kind of oil spill again ... but we have to deal with what happened" and move forward.

The payment was part of almost $600,000 that two of the company's subsidiaries agreed to spend toward a project to improve water quality at Lake Conway. The remaining $100,000 went to the University of Central Arkansas in nearby Conway and the Lake Conway--Point Remove Watershed Alliance. Both announced plans to educate the public about the area's water quality.

That money was in turn part of the almost $5 million consent decree that subsidiaries Exxon Mobil Pipeline Co. and Mobil Pipe Line Co. reached with the state and federal governments over the Pegasus pipeline rupture that sent tens of thousands of gallons of crude gushing into the subdivision and a cove of the popular man-made fishing lake.

That settlement called for the subsidiaries to pay $3.19 million in federal civil penalties in addition to addressing pipeline safety issues and oil-response capacity. The companies also agreed to pay $1 million in state civil penalties and $280,000 to the Arkansas attorney general's office for its legal costs.

Randall Palculict, a Little Rock architect working on the project -- called City Center -- estimated its total cost would be $1.8 million to $2 million.

The city wants to include a new police station but could build it adjacent to the site later if necessary, Palculict and Holland said. Without the station, the facility would cover 5,800 square feet. The station would add 3,000 square feet, Palculict said.

Timing for construction depends on how soon the city can raise the rest of the money, Holland said. The city already owns the land, which is near the current City Hall.

Asked if a tax increase would be needed to help finance it, Holland said it was too soon to say but that he would be "looking at all financial courses," including grants.

Features in the nature pavilion would include an area where school buses could park to let students out; a walkway canopy that would collect rainwater to use for irrigation; a place where children could test water taken in from Lake Conway; and stations where people could view remote areas of the lake and wetlands with the help of cameras set up in those areas.

The pavilion also would feature information about Mayflower's history, and Holland said repeatedly that he'd like to include information on the area's Civil War history.

The current City Hall would house the town's Water Department under the long-term plan, Holland said.

Exxon Mobil spokesman Ashley Smith Alemayehu said that "a limited number of contractors and employees are monitoring remediation efforts in the cove." Authorities have said oil reached the cove but not the main body of the lake.

Other signs of the spill, which occurred on a Good Friday afternoon, linger.

Keith Stephens, spokesman for the Arkansas Game and Fish Commission, which built the 6,700-acre lake, said Exxon Mobil still has work to do in the area.

"Final habitat restoration is not complete," Stephens said in an email. "Also, the natural-resource damages component hasn't been resolved with Exxon. Our commission, along with [the Arkansas Department of Environmental Quality] and the U.S. Fish and Wildlife Service, are working together to settle this."

About a mile from City Hall sits the Northwoods subdivision, where the pipeline, built shortly after World War II, cracked open between two houses in a cove on North Starlite Road.

The subdivision once had 62 houses. Exxon Mobil demolished two of them because of oil beneath the foundations. A third is now an information center. For-sale signs were staked outside at least 12 houses in the subdivision Wednesday, with eight of them on North Starlite Road alone. At least two more were empty but had no for-sale sign.

In December 2014, Exxon Mobil spokesman Christian Flathman said Mobil Pipe Line Co. had bought 38 of the 62 homes and could buy more under a compensation plan offered to homeowners shortly after the spill.

Alemayehu said Wednesday that the company has sold "more than 20" of the houses it bought.

"We still own a bit more, several of which are on the market now," she said in an email.

Instead of curtains or blinds, paper notices are now posted in at least two houses' front windows.

One notice is about a foreclosure. Another threatens vandals with prosecution. A third says the property inspector has "temporarily secured and maintained" it to "protect it against future deteriorations."

Most of the brick houses along North Starlite have well-tended lawns, some with carefully landscaped, colorful gardens. In 2014, Exxon Mobil sold one of the houses for $182,500 after paying the previous owners $167,000 for it, public records showed. The buyers were a couple whose home had been destroyed by a tornado.

A man working in his garage on a nearby street Wednesday said he was living there when the spill occurred but that he did not want to comment.

Print Headline: Exxon's $500,000 is in for a city hall; Mayflower plans include pavilion