Darren McFadden: Injury from slip near pool, not from dropped cellphone 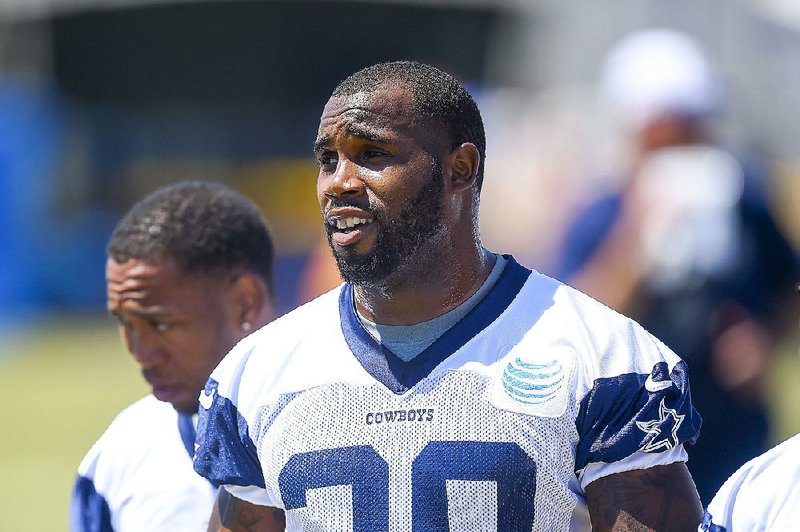 A broken elbow will keep Darren McFadden off professional football fields for at least the bulk of summer, but it didn't keep him from a group of 150 elementary and junior high school students at a Little Rock Air Force Base practice field in Jacksonville on Thursday.

McFadden, with his right arm in a brace that ran from armpit to wrist, moved with ease through the heat and across the crowded turf.

An All-American running back for the Arkansas Razorbacks in 2006 and 2007, McFadden, 28, is preparing for his ninth NFL season. He played for the O̶a̶k̶l̶a̶w̶n̶ Oakland* Raiders from 2008-2014 but had his second-best season in the fall with the Dallas Cowboys.

"I got a few weeks left in this brace, but other than that, my body feels good," McFadden said. "I feel great, and I'm looking forward to the season. I'm ready to go."

McFadden (Pulaski Oak Grove) said reports he broke his elbow after he fell in an attempt to save a dropped cellphone were untrue. He said he was in a friend's backyard after a funeral and slipped on cement near a swimming pool.

"I just slipped down and landed on my elbow," he said. "My phone was in my hand, and so people kind of put that story out."

Dallas picked up free-agent running back Alfred Morris, 27, in the offseason. Morris rushed for a total of 4,713 yards the past four seasons with the Washington Redskins. Dallas also selected two running backs in the NFL Draft in April -- Ezekiel Edwards of Ohio State with the fourth pick of the draft and Darius Jackson of Eastern Michigan in the sixth round.

McFadden said he is unconcerned about the competition and is pleased to see the Cowboys have added depth to the backfield.

"I'm a guy who has always pretty much shared a lot of carries along the way, and I don't mind being in a backfield like that," McFadden said. "I like competition, because the best of competition brings out the best in me."

McFadden has held camps at Little Rock Air Force Base since 2014 and said it was an easy choice for him from the start.

"Being from Arkansas, and being able to come out here and do this for military families, it's just a great thing to get to do," he said. "I love the state of Arkansas, and any way I can give back, I'm always willing to do it."

He said he tries to emphasize the importance of persistence and hard work.

"My dad always instilled in me to work hard and stay humble," McFadden said. "That's something I've always tried to do, and any time I can pass it on to someone else, it's a great joy for me."

McFadden's father, Gralon McFadden, watched from the sideline as his son conducted the camp.

"That was the way I was raised," Gralon McFadden said. "Back in the day, you know, I was out in the cotton fields and hard work was the only way to get by. That's what I tried to teach Darren, and I guess it stuck with him."

*CORRECTION: Dallas Cowboys running back Darren McFadden played for the Oakland Raiders from 2008-2014. His former team was listed incorrectly this story.