Many starters returning for LSU this fall 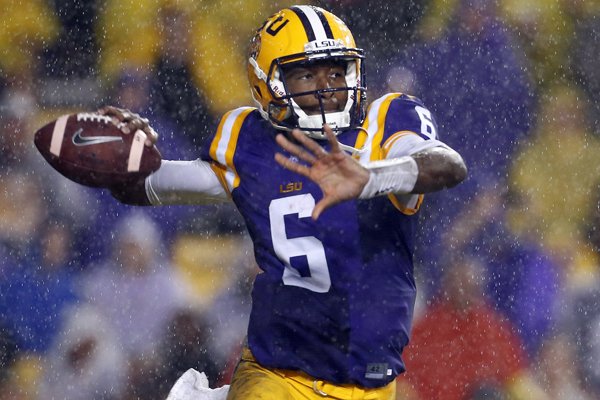 This is the 10th piece of a 12-part series previewing Arkansas' 2016 football opponents.

LSU is coming off a 9-3 year capped by a 56-27 win over Texas Tech in the Texas Bowl. The Tigers went 5-3 in SEC play, finishing fourth in the western division. They were ranked No. 16 in the final Associated Press poll.

WholeHogSports will preview all 12 of Arkansas' 2016 football opponents in the following days. Here is a schedule of when each preview will be published:

Before traveling to Arkansas on Nov. 12, LSU hosts Alabama in what has become a premier game every season. The following week, the Tigers host South Alabama.

LSU is expected to be even better in 2016, as ESPN’s Football Power Index ranks the Tigers second in the country, behind only Florida State, and projects them to win 10.2 games.

Offshore sportsbook 5Dimes is also confident in LSU, putting its over/under at 10.5 wins when it released SEC win totals last month. That is tied with Tennessee for the highest in the conference.

LSU had five players selected in the 2016 NFL Draft.

Cornerback Rashard Robinson – who hadn’t played for the Tigers since 2014 because of off-the-field issues – and safety Jalen Mills (30 tackles, 3 PBU in 7 games) were also fourth- and seventh-round picks, respectively.

The Tigers return virtually everyone from last year’s team. To be exact, 18 starters are back for LSU.

Middle linebacker Kendell Beckwith (84 tackles, 10 TFL, 3.5 sacks) will be the leader of a defense that also features one of the top cornerback tandems in the SEC: Tre’Davious White (44 tackles, 7 PBU) and Kevin Toliver II (35 tackles, 5 PBU, 1 INT).

Offensively, LSU is headlined by Heisman Trophy contender Leonard Fournette. As a sophomore, Fournette earned consensus all-America honors after rushing for an LSU-record 1,953 yards and 22 touchdowns. His 162.8 yards per game led the NCAA.

For the fourth consecutive season, LSU signed a top-10 recruiting class in 2016. This year’s class was No. 5 nationally, according to Rivals, despite not having a five-star prospect. Instead, the Tigers signed 15 four-star prospects.

Among those four-star players were the top two players in the state of Louisiana: defensive back Kristian Fulton and defensive end Glen Logan.

Because LSU returns so many starters, most newcomers won’t be thrust into a starting position, but offensive lineman Donavaughn Campbell and linebacker Michael Divinity – both of which are four-stars – could see some early playing time because of the departure of players and their positions.

Despite rumors swirling near the end of last season, Les Miles is entering his 12th season as LSU’s head coach. He is the SEC’s most tenured coach, with a 112-32 record with the Tigers and a 139-53 overall record as a head coach.

LSU has won double-digit games seven times under Miles and never won fewer than eight games. Miles’ two 8-5 seasons (2008 and 2014) are the only ones in which the Tigers didn’t end the year in the top 25 rankings.

Cameron joined the Tigers’ staff after a five-year run as the Baltimore Ravens’ offensive coordinator. He has been a head coach for the Miami Dolphins (2007) and at Indiana (1997-2001).

Aranda, who was Wisconsin’s defensive coordinator from 2013-2015, will be converting LSU from a 4-3 to a 3-4 defense. His defenses ranked in the top 10 nationally in total defense all three seasons with the Badgers.

LSU’s roster does not include any Arkansans, but there are 10 Razorbacks who either grew up in Louisiana or played high school ball there.

Defensive line coach Ed Orgeron was an assistant strength coach for the Razorbacks in 1986 and 1987 and special teams coordinator and linebackers coach Bradley Dale Peveto had the same position at Arkansas in 1994 and 1995.

Thoughts from a beat writer

To get an even better idea of what LSU will look like in 2016, WholeHogSports reached out to Ross Dellenger, who covers the Tigers for The Advocate in Baton Rouge, La. We asked him several questions about LSU. Here are his responses:

WHS: Vegas and other prognosticators seem to be pretty high on LSU this season. What would you consider reasonable expectations for the Tigers in 2016?

RD: Most around Baton Rouge would call anything less than 10 wins a disappointment this season. Some would say the Tigers should cross a couple of hurdles, too - beat Alabama and advance, at least, to the SEC championship game.

Expectations are that high. Why? Because LSU returns 18 of 22 starters, has an upperclassman at quarterback for the first time since 2013, a Heisman hopeful running back and as many as three first-round NFL draft talent on defense.

WHS: Is Leonard Fournette capable of replicating - or even improving on - his performance last season?

RD: Improving will be tough. Even replicating will be no easy task. After all, it was, statistically, the best season for a running back in LSU history. Fournette set single-season records for yards (1,953) and touchdowns (22). He led the nation in yards per game at 162.8 — nearly 15 yards more than the next player, Heisman Trophy winner and ex-Alabama star Derrick Henry.

The point is, teams will be keying on Fournette like never before, ganging up and cramming the line of scrimmage like he's probably never seen. His improvement this year depends a lot on Brandon Harris and others around him.

WHS: How did Brandon Harris improve at quarterback through spring practice? What does he still need to work on?

RD: The hiring of receivers coach Dameyune Craig from Auburn has helped Harris, he says. Craig was a similar style quarterback during his days at Auburn in the 1990s. He's implement new passing drills and has grown close to Harris during this off-season. His hiring was a big step in improving Harris' game, especially the key area that needs improvement - short to intermediate accuracy.

That area still needs work, but coaches are hopeful that everyone will see a new Brandon Harris since he's got a full year as a starter to his resume.

WHS: Defensively, who will LSU lean heavily on to make plays?

RD: Who will they not? The Tigers are loaded on defense, returning all but defensive back Jalen Mills and linebacker Deion Jones. Middle linebacker Kendell Beckwith is the key to a unit that's switching from a 4-3 to a 3-4 front with new defensive coordinator Dave Aranda, an Xs and Os whiz who most recently turned Wisconsin's defense into a power.

Arden Key, an athletic sophomore, evolved into a starter last season, and, now, he's shifted from defensive end to LSU's new Buck position - an outside linebacker/DE hybrid in the 3-4 and a spot that will surely utilize his length and speed. Cornerback Tre'Davious White passed on what many believe would have been a late first round or early second round selection in the draft in May, and safety Jamal Adams is a returning All-American candidate who lays the big hits. That's not even mentioning returning starters Davon Godchaux, Christian LaCouture and Lewis Neal on the line.

WHS: How do you think the Tigers will fair against Arkansas this November?

RD: LSU never fairs too well against the Hogs. It just feels like they don't get up for the game. And this goes back years and years - since Nick Saban patrolled the LSU sidelines in the early 2000s.