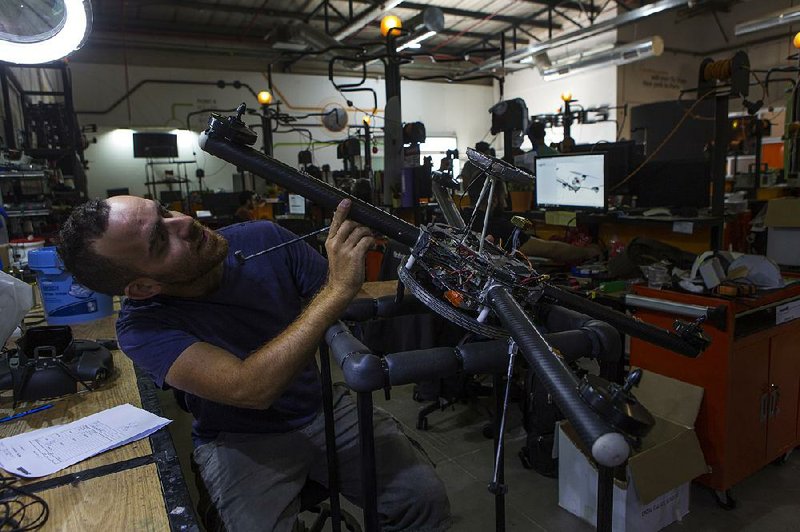 A technician works on the assembly of an Optimus-01 autonomous drone at the Airobotics headquarters in Petah Tikva, Israel, in early June. 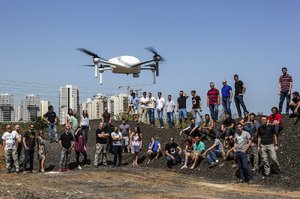 Photo by RINA CASTELNUOVO / Bloomberg News
Employees watch a demonstration of the Optimus-01 autonomous drone at the Airobotics headquarters in Petah Tikva, Israel, earlier this month.

It has experience at the helm: Ran Krauss, chief executive officer and co-founder of the company, was the first Israeli to get a commercial pilot's license for drones, the first to receive a commercial operating license for a drone company -- which meant he actually wrote the manual for the Civil Aviation Authority -- and counts at least a thousand hours of personal experience flying drones. He has operated two previous companies in the space.

Airobotics has raised $28.5 million from investors including Noam Bardin, founder of Google's Waze mapping service, and BlueRun Ventures. It already counts Israel Chemicals as a client, one of the 10 biggest companies on the Tel Aviv Stock Exchange, as well as a global technology company Krauss declined to name.

They're all interested in Airobotics' quadcopters -- drones weighing about 15 pounds and measuring nearly six feet long end to end, with four arms and a propeller attached to each. Completely autonomous, they can be programmed to take off, conduct a surveillance flight and monitor defined areas of land, report back any anomalies, return to base and park themselves. A robotic arm on the landing pad replaces the drone's batteries and any payload, readying it for another mission. The drones are equipped with mapping and photographic capabilities, and are built to integrate other technologies such as infrared imaging.

Israel Chemical's manager of the phosphate division, Yakov Kahlon, said the drones have already allowed the company to cut down the measuring time of stockpiles from six days to just one. Israel Chemical plans to start testing the drones for surveillance and maintenance, having the autonomous flying machine send a wireless alert to a human team should it detect anything unusual.

Airobotics exists in a fast-growing market and has at least 25 Israeli competitors. Grand View Research Inc., a U.S.-based consultancy, forecast the commercial drone market will grow fourfold to $2.1 billion by 2022 from about $550 million in 2014. Radiant Insights Inc., another U.S. market research group, expects greater growth -- to $4.8 billion by 2021, from what it says was $609 million in 2014.

As long ago as 1973, Israel was developing unpiloted surveillance drones; thirteen years later it developed a medium-sized reconnaissance drone with the U.S., Deloitte Israel, a consultancy and accounting firm, said in a recent report. From 2010 to 2014, Israel produced 61 percent of all unmanned aerial vehicles exported worldwide, according to market data portal Statista.

"Israel is a very good place to develop drones," said Krauss, many of whose employees formerly worked for the country's top defense companies: Rafael Advanced Defense Systems Ltd., Israel Aerospace Industries Ltd., and Elbit Systems Ltd. "In Israel, the hardware experts for the defense industries are top-of-the-line. If you try to find a good hardware engineer in Silicon Valley, it's difficult."

Krauss's first company in this sector, Bladeworx, offered aerial cinematography and backup in the 2014 oil spill off the coast of Eilat. The second, ParaZero, makes ballistic parachutes for unmanned aerial vehicles. Both were founded in 2012, although only ParaZero continues to operate today.

While startups like Airobotics, with advanced technology and a focus on the commercial market, may have an initial advantage of traditional military unmanned aerial vehicle manufacturers, the headstart may not last long.

"Once the military companies, usually very large with deals in the billions of dollars, shift into the civilian and commercial markets, smaller companies will be at risk of their business being taken away or just being acquired," said Lior Yekoutieli, head of Global Technology Alliances at Deloitte Israel.

Meanwhile, Airobotics expects to have 25 systems in operation by the end of the year and to eventually start manufacturing and assembling in Asia.