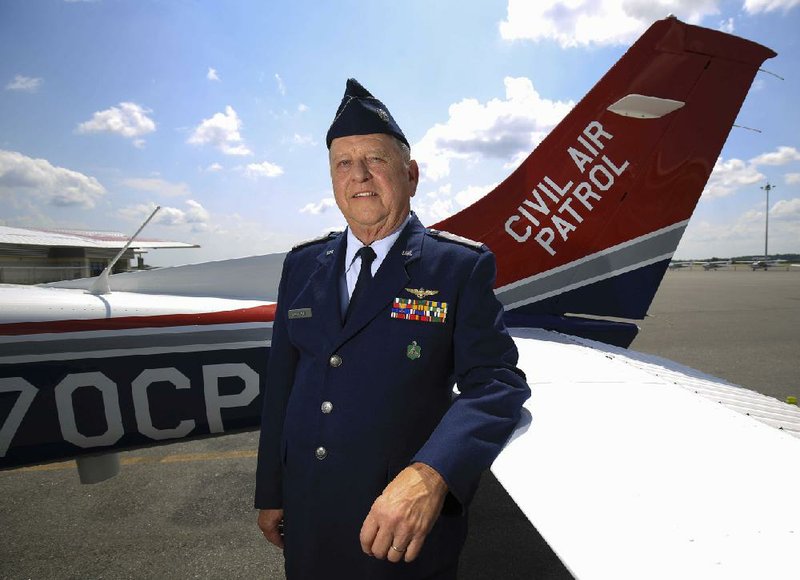 Joel Buckner's 50 years in aviation can best be summed up as quality over quantity.

Although the North Little Rock resident has logged an average of 64 hours a year over that time, about what a weekend recreational pilot might log, he was presented the Federal Aviation Administration's Wright Brothers master pilot award during a presentation Friday at Bill and Hillary Clinton National Airport/Adams Field in Little Rock. He is one of 37 pilots in the state to earn the honor since its inception in 2005.

"This award is named after the Wright Brothers, the first U.S. pilots, to recognize individuals who have exhibited professionalism, skill, and aviation expertise for at least 50 years while piloting aircraft as 'Master Pilots,'" according to the FAA.

Few of his hours in the air have come on so-called $100 hamburger runs, aviation slang for when a recreational pilot flies to another town, eats a meal at that airport and then flies home.

Buckner made his hours flying count.

A large portion of the 3,200 hours he has logged -- an estimated 1,950 -- came as a naval aviator at the controls of a Grumman E-2 Hawkeye, a twin-engine airborne warning and control system aircraft distinguished by the 24-foot-diameter rotating radar dome mounted above its fuselage and wings.

He tallied most of those hours during two tours in Vietnam from 1965 to 1971, during which he flew 300 missions launched from an aircraft carrier deck.

"He doesn't have a lot of hours, but he has a lot of experience," said Heather Metzler, an official with the FAA's flight standards district office in Little Rock.

Fifty years after he flew solo for the first time at the controls of a Beechcraft T-34B on March 1, 1966, from Saufley Field, which was part of the U.S. Navy flight school at Pensacola, Fla., Buckner continues to make his time in the air count.

Now, at age 72, he is a mission pilot and check ride pilot for the Civil Air Patrol, a largely volunteer nonprofit organization that is the official auxiliary of the Air Force, with a mission to offer aerospace education, cadet programs and emergency services, which include search and rescue for missing aircraft.

Buckner, who is the husband of Pulaski County Treasurer Deborah Buckner, has loved flying since he was a boy in Prairie County, where he could ride his bicycle to a nearby field to watch Boeing Stearman biplane crop-dusters fly and, now and again, hop in one for a ride. He even would occasionally take the controls, though he had had no formal instruction.

"It enthralled me," Buckner recalled. "There was no fence, no TSA [Transportation Security Administration]. You could just walk out there."

It wasn't until he got to the University of Arkansas at Fayetteville that his dream of flying regularly could be realized, courtesy of the U.S. Navy.

A Navy recruiter approached him on the campus and said he could complete Officer Candidate School over the summer and enroll in flight school after graduation. Buckner wondered how much it would cost. The recruiter said he would be paid.

Buckner was shocked. "I would get paid to fly?"

Not everything the Navy told told him was true, though. Especially the part about being assigned to fly in the Mediterranean Sea to monitor the Soviet Union during the week and "chasing girls" in a Mediterranean country on the weekends.

"I haven't seen the Mediterranean yet," he said.

Instead, Buckner was assigned to an aircraft carrier named -- fortuitously enough given his new honor -- the USS Kitty Hawk and soon sailed for the coast of Vietnam.

Buckner flew the Grumman C-2 Greyhound, which was a variant of the E-2 and was used to haul cargo and personnel between the carrier and shore. But soon enough he was in the cockpit of the Hawkeye. It carried a crew of five: two pilots and three other crew members who operated the systems aboard the aircraft.

The Hawkeye, an updated model of which is still in service today, provides all-weather airborne early warning and command and control functions for the carrier battle group. Its array of radar and sensors also can provide surface surveillance coordination, strike and interceptor control, search and rescue guidance, and communications relay. It is basically an eye in the sky to identify threats to the carrier and its aircraft.

"It was the Star Wars of the day," Buckner said of the aircraft and its electronic warfare missions.

He described his patrols up and down the coast of North Vietnam as a walk in the park for the pilots, while the other three crew members did all the work. But taking off and landing on an aircraft carrier at night in all weather wasn't for the faint of heart. During his career, he took off from a total of 17 different aircraft carriers.

"I can't imagine landing on a moving target," said Metzler, who is also a Civil Air Patrol pilot and has been flying for 26 years.

Other Civil Air Patrol pilots say that, to this day, Buckner carries his experience in the Navy on every flight.

"It's always fun to fly with Joel," Doug Wood said. "You always do carrier takeoffs and carrier landings."

But Buckner's professionalism as a pilot has made him a trusted mission crew member for the Civil Air Patrol, which has nine small, single-engine Cessna aircraft in its Arkansas Wing. Buckner is a lieutenant colonel in the organization and has served several roles, including twice as a vice commander.

Henry Lile, a fellow Civil Air Patrol pilot and recipient of the Wright Brothers award, said he estimated he has flown 50 missions with Buckner, including reconnaissance missions over south Louisiana after Hurricane Katrina.

"We were born to fly together," he said in a roomful of 45 family members, friends and Civil Air Patrol colleagues during Friday's presentation. "As Joel says, we never make the same mistakes at the same time.

"Knowing the dedication, commitment and your skills, it's no surprise to me you're receiving this honor."

Before joining the Civil Air Patrol, Buckner said his post-Navy career in mortgage finance and real estate appraisals, including a stint as president and chief executive officer for Worthen First Mortgage, was aimed at not only supporting his family but helping him have enough money to indulge his passion for flying.