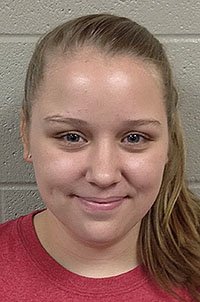 Rebekah Love, 17, who will be a senior at Springdale High School

Rebekah Love, 17, finished third among 94 students from across the country who competed in the senior division's individual documentary category at the National History Day Contest this month. Love received a medal, a certificate and $250.

Love, a Farmington resident who will be a senior at Springdale High School this fall, worked for months on her documentary, "Marshall Islands: A Culture Damaged Through Scientific Exploration and Encounters with Western Civilization."

Her 10-minute piece won first place at both the regional competition in March and the state competition in April, qualifying her for the National History Day Contest.

Love started thinking about the project last summer and began working on it in September. She said she didn't know much about her topic before that, though she goes to school with Marshallese students.

"It's a powerful topic and one that's not talked about much," she said.

History Day is a competition for students in middle school and high school. There are five categories: documentaries, exhibits, papers, performances and websites. All categories have a junior and senior division.

This was the fourth year Love participated in History Day and the third time she's advanced to the national competition, each time in the individual documentary category. In previous years, she did documentaries on the polio vaccine and on Hattie Caraway, an Arkansan who was the first woman elected to the U.S. Senate.

Some islanders were displaced because of the testing, and many people suffered short-term and long-term health effects from the radiation to which they were exposed.

History Day documentaries must not exceed 10 minutes. Because of the time limit, Love initially had trouble grasping how she'd do justice to the story she wanted to tell.

"Once she really started researching it, it was overwhelming for her at first," said Brenda Love, Rebekah Love's mother and a media specialist at Springdale's Sonora Elementary School.

National History Day judges gave Love's work rave reviews, calling the emotional effect "very powerful" and praising her production ability and her use of interviews, according to a sheet that judges provided.

Forrester, who attended the contest and advised area students on their projects, said the documentary Love submitted for the national event was "totally different" from her submission at the state level. Project revisions between the state and national contests are common.

"I knew when she sent me her final copy, she had a very good chance to make it out of the first round [at nationals]," Forrester said.

This year also represented the best showing by Northwest Arkansas at the national contest, Forrester said.

A project must finish in first or second place at the state contest to qualify for nationals.