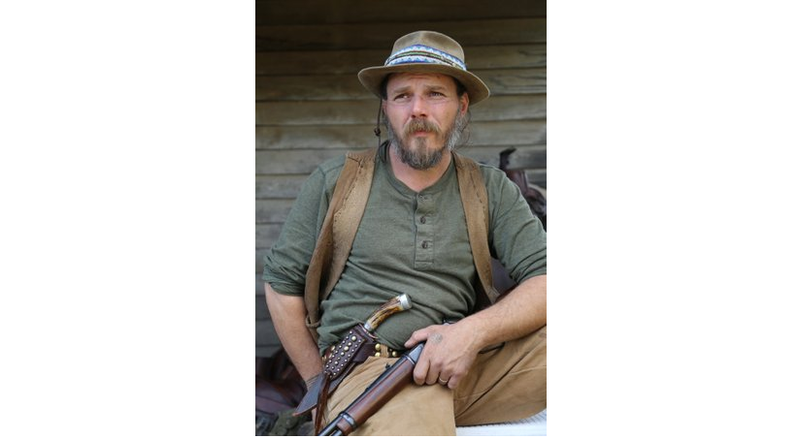 Jason Hawk is living in the Ozarks as part of the History Channel's "Mountain Men" series.

A reality show mountaineer living off the land in north-central Arkansas has made his debut on the History Channel's Mountain Men.

Jason Hawk, who before lived in the Arizona desert on the History Channel's No Man's Land, moved to a homestead in the Ozark mountains for Mountain Men, which focuses on men surviving in rugged terrain without modern conveniences.

Russ McCarroll, a senior vice president of development and programming for the History Channel, said Hawk was originally cast for the second season of Mountain Men. The network, however, decided to build No Man’s Land around Hawk’s primitive lifestyle in the upper Sonoran Desert.

“Unfortunately, that show didn’t resonate with the audience as much as Mountain Men did,” McCarroll said of No Man’s Land, which only lasted one season.

Hawk made an appearance on Mountain Men, which is in its fourth season, Thursday. He and his family — wife Mary and 5-year daughter River — live in a pre-Civil War wooden house that lacks central heating, electricity and running water, which, according to the narrator, is "just the way Jason likes it." The homestead is in a remote part of the Arkansas forest.

“They really are looking for stuff off the grid, off the path,” McCarroll said of the show’s cast. “You have to look for places that you can afford.”

He added that Hawk and his wife also have family connections to Arkansas and that the network had an interest in shooting part of the show in the Ozarks.

On Thursday's episode, Hawk left his house and saw that his outdoor food box — where he keeps the family's perishable foods because they have no refrigerator — had been raided by some sort of animal.

After determining that feral hogs were the ones that had overturned the box, Hawk set off into the woods and eventually located a large herd. To deter them from returning to his home, he shot one of the hogs.

The closing shot showed him dragging it back to his house.

Mountain Men, which also features men living in Alaska and Montana, airs Thursdays at 9 p.m. on the History Channel.