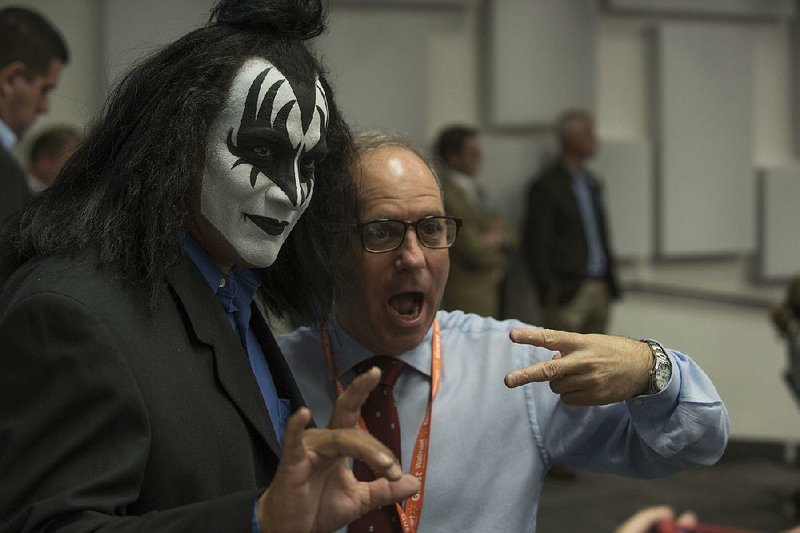 BENTONVILLE -- Wal-Mart Stores Inc. had a surprise Tuesday for the hopeful suppliers invited to the retailer's home office to pitch their American-made products.

The company said "yes" to the 800 products promoted throughout the day.

"It dawned on me that it would be great to just say 'yes' to everything," said Steve Bratspies, Wal-Mart's chief merchandising officer for U.S. stores. "So I challenged my team, and every time I challenge them they come through. They found a way to deliver and make every 'yes' become a reality.

"At a minimum, we're putting every item pitched in open call on Walmart.com," Bratspies said.

Wal-Mart's announcement during the opening session was followed by cheers and applause, setting the tone for the product pitch event held in conjunction with the retailer's fourth U.S. Manufacturing Summit. The events were borne out of Wal-Mart's 2013 initiative to purchase an additional $250 billion in American-made products by 2023.

Wal-Mart buyers spent Tuesday looking for innovative U.S.-made products during meetings with 450 entrepreneurs from 40 states. There were two caveats on the retailer's promise to add each of the 800 products being pitched to Wal-Mart's growing online store -- they must be shelf-stable, and no hazardous materials requiring safe handling would be accepted.

Wal-Mart's decision to accept all of the eligible pitched products had benefits for the retailer and companies. It will add to Wal-Mart's online inventory, which has grown to about 10 million items. It also gives new suppliers an opportunity to get their foot in the door with a company that reported $482.1 billion in revenue last year.

"Our role is to help accelerate your progress when it comes to investing in and creating American jobs and making great products here in the U.S.," said Michelle Gloeckler, Wal-Mart's executive vice president of U.S. manufacturing.

Obi-Tabot and the company's vice president, Sheronda Brooks, didn't leave the meeting with a deal to get the product on the shelves of Wal-Mart's more than 4,500 U.S. stores. But they weren't empty-handed because of the promise their product would be available for customers at Walmart.com.

"It's a game-changer," said Obi-Tabot, who told Patrick that the company was in the process of moving production of its products from Canada to the U.S. "It's not only going to help us, but our families, employees, and clients."

Atlanta-based Unique Flavors was invited to participate in the open-call event after an unexpected run-in with a Wal-Mart buyer in an airport, according to founder Anthony Richardson. The company used the event to formally introduce Wal-Mart's buyers to 17 flavors of iced tea, including pineapple lime and chocolate cherry, and left the meeting with a deal that would put some of Richardson's products onto store shelves in the Atlanta area.

Little Rock-based Pedisand, which was pitching its hands-free foot file during a meeting with Wal-Mart buyer Jamie Grace, also struck a deal with the retailer Tuesday. Owners Carolyn Jones and Karmen Hart were told their products would be added to roughly 240 stores next spring along with the Walmart.com guarantee.

"This is the best platform for ... looking for innovation," Grace said after the meeting with Pedisand. "The other days a lot of times are the same guys that come in day-in and day-out, the big suppliers of the world. It's nice to have a day like this where [buyers have an] opportunity to meet with everybody all at once. It's perfect."

Gov. Asa Hutchinson and members of the Arkansas Economic Development Commission participated in the manufacturing meeting and open call event for the second straight year.

Six commission employees, including executive director Mike Preston, were in Bentonville to meet with companies interested in moving manufacturing back to the U.S. The commission did not have formal meetings scheduled this year, but it sponsored a reception where it got to meet those attending the Wal-Mart event.

Hutchinson was invited to speak during the morning session and called manufacturing the "lifeblood" of Arkansas. He said the state intended to "increase it, encourage it, develop it" with the help of companies like Wal-Mart.

"You're making your pitches to Wal-Mart," Hutchinson said. "You're trying to show your product. Well, let me tell you, I'm making my pitch too. This pitch is for Arkansas and that Arkansas is a great place to do business."

Wal-Mart estimates that two-thirds of the products it sells on U.S. store shelves are made, sourced, assembled or grown in America.

But its "Made in the U.S." claims have been criticized by groups like Truth in Advertising, which said Tuesday that it compiled a sampling of more than 100 "Made in the U.S." misrepresentations that show the retailer "continues to deceive consumers."

The group said it sent a letter to the Federal Trade Commission saying that "intervention is needed."

"Given the time and resources available to Walmart, there is no justifiable excuse for the existence of false or deceptive 'Made in the USA' representations on its website today," Lara Smith, Truth in Advertising's legal director, wrote in the letter.

Wal-Mart International spokesman Marilee McInnis said in an email response that "these claims are not new."

"We will continue to work with our suppliers to help ensure we are giving our customers the transparency and authenticity they are looking for," McInnis wrote.

Wal-Mart, citing research from the Boston Consulting Group, said an estimated 1 million new U.S. jobs will be created through its initiative. Gloeckler said the retailer remained on track to meet its 2023 goal.

"The case for U.S. manufacturing is as strong, if not stronger, than it was when we set out on this journey," Gloeckler said.