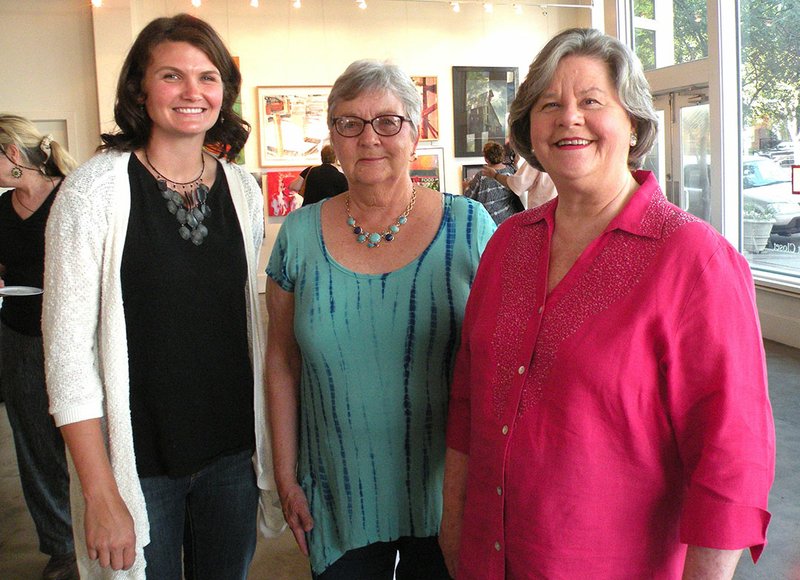 Several area artists have work on display in the Delta des Refusés exhibit at the Thea Foundation in North Little Rock. Shown here at the opening reception are Melissa “Mo” Lashbrook of Cabot, from left, and Sandra Marson and J.D. “Judith” Beale, both of Jacksonville. Barbara Smock of Newport and Charlotte Bailey Rierson of Fairfield Bay also have works in the exhibit but were not able to attend the opening reception.

NORTH LITTLE ROCK — The second annual Delta des Refusés exhibit is currently on display, featuring works by artists who found themselves “rejected” earlier this year from the 58th annual Delta Exhibition, now open for viewing at the Arkansas Arts Center in Little Rock.

Works by several area artists are included in the Delta des Refusés exhibit, which offers them another opportunity to show their art. The exhibit is on display at the Thea Foundation, 401 Main St. in North Little Rock.

Rachel Trusty of Russellville organized the Delta des Refusés last year and serves as its curator again this year. She said the show is created in the spirit of the original Salon des Refusés (Exhibition of Rejects) held in Paris in 1863. Among the rejected artists of the Paris Salon were Manet, Courbet, Pissarro and Cezanne, all artists whose works are revered today.

Trusty said 1,038 works of art were submitted to the Delta Exhibition, and one juror selected only 52. The

“The Delta des Refusés strives to offer an alternative view of regional art, and like the Salon des Refusés, hopes to give legitimacy to artists who were not accepted into the

Delta Exhibition,” said Trusty, who is the gallery coordinator for the William F. Laman Public Library System in North Little Rock. “Led by artists and without a juror, the show embraces the ideas of freedom of exhibition and freedom of expression. It hopes to place the power of judgment in regard to taste into the hands of the public.”

Trusty said the Delta des Refusés will be held again next year in June and July, and the call for entries will begin in March. An artist must have submitted work to the Delta Exhibition and have received a rejection letter before he or she can enter the Delta des Refusés. Artists can check social-media outlets such as Facebook, Instagram and Twitter, as well as the website www.deltadesrefuses.com, for more information.

Among the local artists with works displayed in the Delta des

Refusés are the following:

“The intent behind the work Barlach’s Angles, Edges and Emotions, which is one work in a museum view series of eight, was to visually express my concern that museum relevance is in jeopardy,” Beale said. “The idea was to take a major piece of art and place it in a traditional museum setting with characters viewing the art as ‘objects without context’ that require too much time to contemplate in this instant-gratification age.

“What a shame we do not have art and art history required in the curriculum of every secondary and university system in the nation. I want to thank Thea for the opportunity to exhibit this work and be a part of the Delta des Refusés 2016 exhibit. This is a wonderful event for the state and for central Arkansas, since it will bring in new artists from across the country that we might otherwise not get to know.”

• Melissa “Mo” Lashbrook of Cabot is exhibiting a mixed-media piece called And Let There Be Light.

Lashbrook describes herself as an “assemblage” artist.

“I built this, except for the plastic skulls and the colored light bulbs,” she said of the large installation. It measures 72 by 12 by 7.5 inches and lights up.

“Although I created it before the Orlando, [Florida], shootings, it can certainly relate to that incident. We need to find inspiration … to find love in life.”

Lashbrook studied fine arts at the University of Central Arkansas in Conway and during the Institute for Shipboard Education’s Semester at Sea. She served a tour of duty in Iraq as a combat helicopter pilot.

She teaches art at both Northside and Southside elementary schools in Cabot.

• Sandra Marson of Jacksonville is displaying a painting titled Once in a Blue Moon.

“I entered this show because it was a sure thing,” she said with a smile. “No juror.

Also, the Thea has a great gallery space, and the Friday Night Art Walk always draws a lot of people.”

The opening reception for the Delta des Refusés exhibit was held June 17 during the monthly art walk through the Argenta Arts District in downtown North Little Rock.

“My paintings are based on the formal elements of design with emphasize on color and shapes moving in space,” she said. “Strong value changes and texture are used to increase contrast.

“I am always striving to paint abstract images in a new way that is pleasing to the eye and evokes an emotional response.” She added that she describes herself as an “experimental artist and an intuitive painter.”

Marson graduated from the University of Arkansas at Little Rock in 1991 with a Bachelor of Arts degree in English and a minor in art. She retired after 36 years with First Electric Cooperative in Jacksonville and began creating art full time. She is a signature member of the Mid-Southern Watercolorists and a member of the Arkansas League of Artists, the North Central Arkansas Art League and the International Society of Experimental Artists. She is also an Arkansas Repertory Theatre exhibiting artist.

• Barbara Smock of Newport is displaying an acrylic painting called The Paddock at Oaklawn.

“I work in all mediums and enjoy experimenting with new ideas,” said Smock, who moved to the United States from England when she was in her 20s. “I am an equine artist, although I do paint other animals and people.

“I’ve tried all mediums but have settled on acrylics. My paintings are all about color.

“I grew up in a large creative family. I have a brother who was short-listed twice for the Royal Academy of Arts exhibit, which is the most prestigious show in England. That spurred me on to pursue art.”

Smock said she had always wanted to be a potter, “but after I got to the United States, I found that would not be a suitable career,” she said.

“I found a good job and raised a family, but I always did art. I painted murals on the walls of my children’s rooms. It was not until I retired about 10 years ago that I began to focus on painting,” she said.

“Now I am quite prolific,” she said with a laugh. “I have paintings all over the world.”

Smock said she read about the Delta Exhibition at the Arkansas Arts Center as being “the most prestigious in Arkansas, and if you wanted to make a name for yourself, you had to get in it.

“I entered the Delta Exhibition this year but did not get in. But I was able to display my work in the Delta des Refusés, which is wonderful.

Smock is a member of the Spring River Art Guild and the Arkansas Arts Council’s Artist Registry.

“I love entering my artwork in competitions. I think it helps validate me as an artist,” Rierson said.

“Usually, I have my paintings selected, but with the Delta Exhibition, … I have not had my paintings chosen. That art exhibit is more challenging with a lot of entries. [Submitting work to] the Delta Exhibition gives me a chance to go out of the norm and really express my inner art spirit. This year’s entry was a watercolor self-portrait and how I visualize myself in one of my frightening dreams,” she said.

“The Delta des Refusés exhibit was really needed so our art patrons could see more artists’ artwork than the few selected to be in the Delta Exhibition,” she said.

Rierson has a Bachelor of Science in Education degree from UCA, where she majored in art education. She is a past president of the Mid-Southern Watercolorists and now serves as its director of regional advisers. She is also a member of the North Central Arkansas Foundation for the Arts in Fairfield Bay and a signature member of the Arkansas League of Artists.

The Delta des Refusés exhibit will remain on display through July 17. The Thea Foundation, 401 Main St. in North Little Rock, is open from 9 a.m. to 5 p.m. Monday through Friday. More information on the exhibit can be found at www.deltadesrefuses.com.