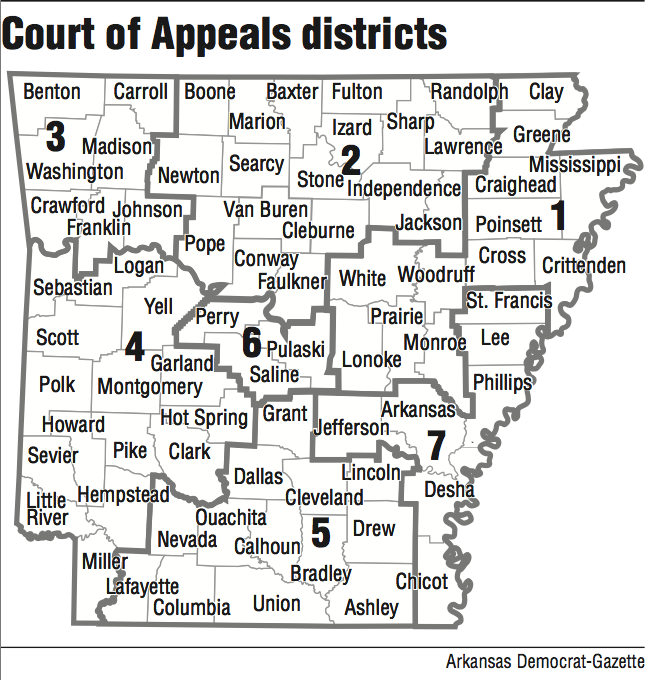 A state circuit judge beat out a prominent prosecutor while a former military lawyer forced a runoff with a public defender in a pair of contests for the Arkansas Court of Appeals.

With 506 of 530 precincts reporting, unofficial returns were:

Murphy said he was pleased with the outcome after a hard campaign where he was outspent by Hiland.

Going forward, Murphy said, he wants to see what he can do to find a way to keep money out of the court and to overhaul judicial elections so that they are not subject to the influence of out-of-state money as was seen in the two Supreme Court races.

"When I talked to voters, they were talking about the big money in judicial races," Murphy said. "They're concerned about dark money coming into races. Lucky we didn't see it in our race. They saw it in the Supreme Court and it bothers people. I think our campaign, a large part of [our success] was my experience on the bench and background, part of it was running against that culture [of money]."

Former military attorney James McMenis had a narrow lead in a three-way race over Deputy Public Defender Mark Klappenbach, and a Department of Human Services administrator and attorney, Job Serebrov for the District 5 seat on the court.

With 241 of 251 precincts reporting, unofficial returns were:

McMenis and Klappenbach will compete in a runoff election in November.

Reached by phone Tuesday night, McMenis said he was "humbled" to be doing so well in such a tight race.

"You never know when you start one of these races whether people will be receptive or vote for you," McMenis said. "As [Klappenbach] did, we were both from families from south-central Arkansas. We had connections to the district, knew the people in the district. I think that was key."

The Court of Appeals is the state's second-highest court and is made up of 12 judges chosen in nonpartisan elections. They serve eight-year terms and are paid $161,500 a year. The chief judge is paid $164,000.

In the District 2, Position 2 race, which encompasses 18 counties in north-central Arkansas, Murphy and Hiland were battling to replace Judge Cliff Hoofman, who was appointed to the bench in 2014 by then-Gov. Mike Huckabee and was ineligible to run for the seat.

Murphy, 55, spent more than 22 years as the Conway city attorney before becoming a judge.

He was elected to the 20th Judicial Circuit bench in May 2014 but joined the court earlier that September when then-Gov. Mike Beebe appointed him to temporarily take the position left open by Judge Michael Maggio. Maggio was removed from the bench and is now being prosecuted by federal authorities on a bribery charge.

For Murphy, restoring public confidence in the courts was one of the main drivers behind his campaign.

Hiland, a Van Buren County native, unsuccessfully ran for state representative as a Republican in 2006. In 2010, he unseated Faulkner County's incumbent prosecuting attorney.

Since taking the post, Hiland has been active working with fellow prosecutors and other legal professionals, and was involved in high-profile cases both within and outside his district.

Hiland, 44, said he sought the office in order to bring a common-sense, law enforcement perspective to the court. A former Republican, Hiland said politics doesn't come into play as a prosecutor, or as a judge, and said he would work to preserve the separation of powers between the branches of state government.

In the District 5 race, which covers 13 counties in south-central Arkansas, McMenis, Klappenbach, and Serebrov vied to replace Judge Mike Kinard, who was appointed to the post in early 2015 by Gov. Asa Hutchinson and was ineligible to run for the position.

McMenis, 67, spent most of his career as a military attorney. In his last 10 years with the Army, he worked for the Department of Defense, where he handled an array of legal matters. Upon his return to Arkansas, he has returned to private practice. He has unsuccessfully run for state representative twice as a Democrat in 2008 and 2012.

Klappenbach, 56, has been a deputy public defender since 2008. In addition to having worked as an accountant, Klappenbach is also the president of the Fordyce School Board.

Serebrov, 56, was appointed as the Department of Human Services' director of the Office of Quality Assurance by Hutchinson. He has clerked in federal court, did regulatory work for various state and federal agencies and is a sitting judge on a tribal appeals court in California.