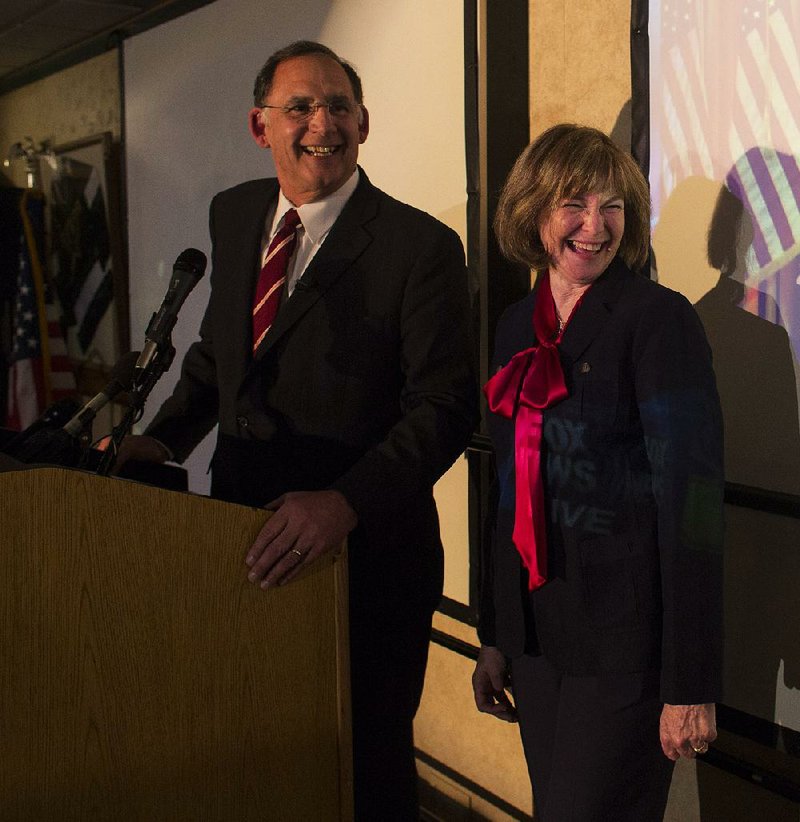 U.S. Sen. John Boozman, R-Ark., with wife Cathy by his side, speaks to the crowd gathered Tuesday night at the Embassy Suites in Little Rock after winning the Republican primary for the Senate. 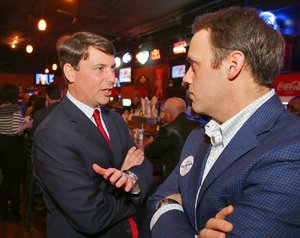 In his bid for a second six-year term in the U.S. Senate, Boozman of Rogers advances to the Nov. 8 general election.

Boozman said there is "a clear difference" between him and Eldridge.

He said Eldridge, who was appointed as U.S. attorney by President Barack Obama, would enable "a third term of Barack Obama" and his policies and would increase the size of the federal government, spending and the national debt.

He said Boozman doesn't understand what he did as a federal prosecutor.

Eldridge said Boozman has served 15 years in Congress and seen the national debt triple under both Republican and Democratic presidents.

Eldridge said he has proposed five debates and five town-hall events for the candidates for the U.S. Senate seat held by Boozman.

Boozman said "this is way too early to be deciding those things."

Boozman said he won the Republican nomination because he and his staff have worked hard to represent the people of Arkansas. "We understand we don't work for the federal government."

Coleman said he lost to Boozman because many people in his "huge grass-roots organization" made commitments to work on other campaigns before he filed in November. "There wasn't time to energize and mobilize our organization in 60 days," after the Thanksgiving and Christmas holidays, he said.

He said he will support whoever is the Republican presidential nominee.

Boozman said he'll support the Republican presidential nominee, who would make a better president than either of the Democratic presidential candidates, U.S. Sen. Bernie Sanders and Hillary Clinton.

Asked if Republican presidential candidate Donald Trump would be an issue in the Senate race, Eldridge said he wants to focus on what Arkansans want.

"We are all sick of politics and sick of Washington, and it's time to focus on listening to the people of Arkansas," he said.

This is the second time in six years that Boozman has defeated Coleman in a race for the Republican nomination for a U.S. Senate seat.

Coleman made another try at statewide office in 2014 but lost to Gov. Asa Hutchinson in the Republican primary. Hutchinson won 73 percent of the vote, compared with Coleman's 27 percent.

In November, Coleman filed on the last day to file for the U.S. Senate, after he said he received commitments for $20,000 in contributions to cover his filing fee. He said he decided to challenge Boozman because "we need a much more conservative vote in the U.S. Senate than we are getting from Boozman."

Coleman subsequently hired a senior campaign adviser -- Virginia political consultant Zachary Werrell, who managed the campaign of U.S. Rep. David Brat of Virginia, a Republican, in his ouster of House Majority Leader Eric Cantor in a primary in June 2014.

In his campaign against Boozman, Coleman maintained that Boozman isn't conservative on fiscal issues.

He said Boozman voted seven times to collectively add $6.3 trillion to the federal government's now $19 trillion debt and voted in December 2014 for a federal budget that "effectively funded Obama's executive amnesty order, the use of tax dollars for Planned Parenthood and another year of Obamacare."

Boozman disputed Coleman's characterization of his voting record. He said he has good grades with conservative groups such as the American Conservative Union, Americans for Prosperity, National Right to Life, National Rifle Association and Numbers USA, which seeks to reduce illegal immigration.

He said he voted to increase the debt ceiling when George W. Bush was president after the Sept. 11, 2001, terrorist attacks on the World Trade Center and the Pentagon, and the U.S. spent a lot of money on wars in Afghanistan and Iraq.

Boozman said he voted to raise the debt ceiling once with Obama as president in return for the biggest slowdown in federal government spending in a decade in the Budget Control Act of 2011. He said it's ridiculous for Coleman to suggest that he supported Obama's executive immigration order, the use of tax dollars for Planned Parenthood and another year of the Patient Protection and Affordable Care Act.