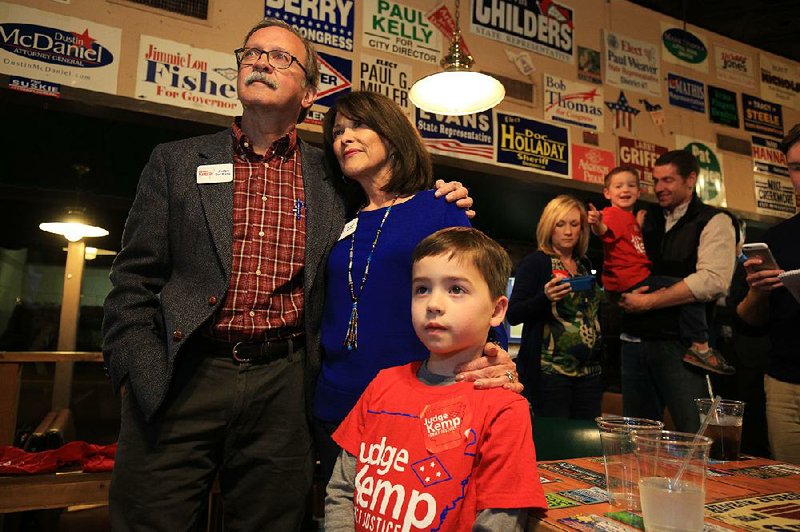 Dan Kemp watches the returns Tuesday night with his wife, Susan, and grandson Hoover Brogdon, 6, at an election party in Little Rock shortly after being declared the winner in the race for state Supreme Court chief justice. 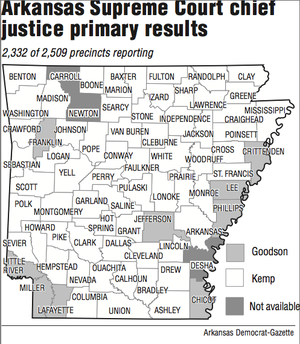 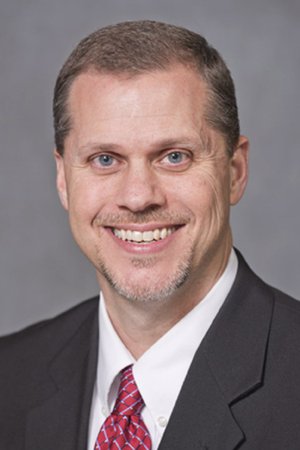 Kemp of Mountain View will be the state's next chief justice, and Womack of Mountain Home will take the spot left open by outgoing Justice Paul Danielson.

Reached by phone late Tuesday night, Kemp said he was "gratified and honored" not only to win but also to do so by what he saw as a mandate from a large majority of voters.

"I believe they had confidence in me and what I stand for, the values I have," Kemp said. "Hopefully they have confidence in our Supreme Court that we'll decide our cases according to the rule of law and the facts of the case and not let politics get involved in the decisions we make."

Goodson, who will remain on the Supreme Court as an associate justice, issued a statement Tuesday night that congratulated the state's new chief justice.

Womack, a judge in the 14th Judicial Circuit, said Tuesday night that he was encouraged by his sizable margin of victory and eager to get to work.

He said he thinks Arkansans will benefit from his years of experience in the Legislature when it comes to interpreting law.

Kemp, a judge in the 16th Judicial Circuit, will take over for Chief Justice Howard Brill, who was appointed in September 2015 to replace Chief Justice Jim Hannah who retired for health reasons. Hannah died earlier this year.

Goodson, 43, joined the court after a two-year stint on the Arkansas Court of Appeals. She is from Northwest Arkansas and currently lives in Fayetteville, which is where she attended college and law school.

Upon graduating law school, Goodson went to work as a clerk in the appeals court and went on to run for an open position on that bench.

Goodson has said that her career working in Little Rock's appellate courts gives her the right kind of experience, both as a jurist and as a manager, to lead the court.

She also campaigned on increasing transparency for the court, as well as restoring "accountability" to the state's judiciary. She said that part of that effort would be finding a way to get "dark money" out of judicial campaigns.

Goodson's candidacy has been targeted by "dark money" ads, which is political shorthand for groups that can spend unlimited amounts without disclosing the source of their funds.

Those ads came from the Judicial Crisis Network, a Washington, D.C.-based group that has spent millions to help elect more conservative judges in several states. The group spent more than $600,000 in ads on local Arkansas television stations.

The ads accused Goodson of being too cozy with trial attorneys, and mailers sent by the group have accused her of siding with the agenda of "liberal" President Barack Obama.

Goodson, who divorced shortly after her election in 2010, remarried trial attorney John Goodson. Goodson and law firms associated with him in class-action lawsuits have contributed hundreds of thousands of dollars to several Supreme Court campaigns, including Goodson's, and were the subject of an investigative series by the Arkansas Democrat-Gazette.

In 2015, Goodson, along with other justices, were investigated by the Judicial Discipline and Disability Commission after letters of recusal filed by Justice Paul Danielson and former Chief Justice Jim Hannah accused the "majority" of the court of intentionally delaying a ruling in the challenge to the state's prohibition against same-sex marriage.

Ultimately, the commission cleared Goodson and other justices of any wrongdoing.

The justices did not rule on the challenge to the state's same-sex marriage ban before the U.S. Supreme Court struck down such bans as unconstitutional.

In her statement, Goodson said that she looked forward to working with Kemp and the other justices.

"This campaign experience has been life affirming, and I am overwhelmed by the support I have received throughout this campaign," Goodson wrote. "I plan to continue serving [Arkansans] by upholding our state constitution and finally ridding Arkansas of anonymous dark money judicial campaigns."

Kemp also expressed frustration Tuesday night about the rising role of outside money and negative ads in the state's judicial contests.

"I hope to see some reform in the present system," Kemp said. "I think that's going to be a big debate, whether we make a reform in our present system in electing judges or add an amendment to our constitution to provide for the appointment of appellate judges. ... The people will decide regardless."

Unlike Goodson, Kemp was not subjected to hundreds of thousands of dollars in negative attack ads paid for by out-of-state groups.

He said the ads may have helped widen his margin of victory but he was confident his win was the product of campaigning.

"We were doing well before the ads started," he said.

He also said he didn't "anticipate" any problems working with Goodson after a contentious race.

Kemp, 64, is a Stone County native who worked in private practice as well as a part-time municipal attorney and judge before being elected to the circuit court in 1986.

In nearly 30 years on the bench, Kemp has managed a range of dockets, including criminal, juvenile and civil cases.

He helped form a drug court in Stone County 12 years ago and has advocated expanded access to such alternative courts as well as more access to legal aid for poorer Arkansans.

During the campaign, Kemp also stressed the need for more stringent "recusal" rules as well new rules that would prohibit judges from receiving personal gifts.

Kemp's handling of a DWI plea bargain deal involving the daughter of a family friend and an eventual campaign contributor has come under fire from critics.

A Little Rock attorney and blogger, Matt Campbell, filed two complaints with the state's judicial ethics commission alleging that Kemp should have recused from handling a criminal case involving the friend's daughter. Campbell also alleged that, once the woman's case was resolved, Kemp reached out to the family for a campaign contribution, which is barred by judicial ethics rules.

Kemp's campaign dismissed Campbell's claims as a "political" stunt and denied any wrongdoing.

Womack, a former Republican lawmaker, was first elected as a judge in 2008.

After growing up in Mountain Home, he went to law school in Fayetteville, then moved to Washington, D.C., where he worked briefly for former Republican U.S. Sen. Tim Hutchinson.

Womack, 43, returned to Arkansas and was elected to the state House of Representatives in 1998. He later went on to serve six years in the state Senate before running for judge.

In his time as a legislator, he pushed for "tort reform" as well as acted as an opponent of what he described as the "gay agenda."

During his campaign to replace Danielson, Womack stressed that politics would play no role in his rulings.

He also said that he would be a staunch advocate for the separation of powers between the branches of state government.

Mason, who has never served as a judge, said he felt compelled to run for the state's highest court because he wanted to ensure that any case that came before that court would be given a "fair and impartial" hearing.

An Urbana native, Mason, 56, has spent more than 30 years in private, civil practice in the state.

He has represented many types of clients, ranging from farmers to small businesses, in different types of civil lawsuits.

He said that his years of work in the courtroom would bring a fresh perspective to the high court. He also said that, as someone who never ran for office before, he was not beholden to any special interests or political organizations.

Another Washington, D.C., group, the Republican State Leadership Committee, reported investing about $400,000 in ads and other materials aimed at discrediting Mason as a trial attorney whose values were out of touch with average voters.