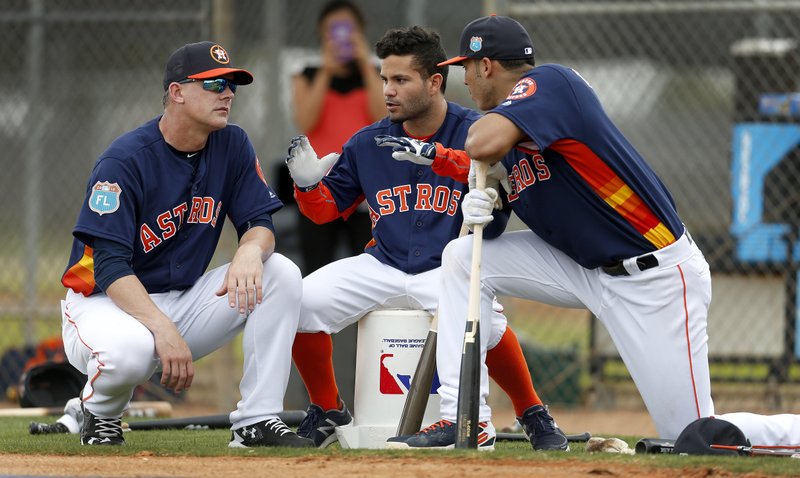 In this Feb. 23, 2016, file photo, Houston Astros manager A.J. Hinch, left, and Astros' Jose Altuve and Carlos Correa chat during a workout at the Astros spring training camp in Kissimmee, Fla. Altuve is one of only a handful of remaining Astros who endured the team's rebuilding project.

KISSIMMEE, Florida -- Jose Altuve is one of only a handful of remaining Astros who endured the team's rebuilding project.

So it makes sense that the All-Star second baseman appreciated Houston's return to the postseason last year a little more than most, and a reason why he's so eager to help the team do even more in 2016.

"It means a lot," Altuve said. "It was a really good year. It was something that we battled for. We wanted to be a playoff team. Nobody thought it was going to be last year, but we've got the team to repeat it."

Altuve's play was instrumental in helping Houston to its first playoff appearance since 2005.

The Astros beat the Yankees in the wild-card game before falling to eventual champion Kansas City in the American League Division Series.

In his fourth full year in the majors in 2015 his stellar work was somewhat overshadowed by the emergence of shortstop Carlos Correa, who was the AL Rookie of the Year, and left-hander Dallas Keuchel (University of Arkansas), who picked up his first AL Cy Young award.

It was a stark contrast from his first two full seasons with the Astros when he was basically the only bright spot on teams that lost 107 games in 2012 and a franchise-worst 111 games the following year.

Though the spotlight may have shifted away from Altuve a bit last year, his work was in no way overlooked by the team.

"When you lead the league in hits, it's pretty exciting to have him be your sparkplug," Manager A.J. Hinch said.

Altuve is only 25, but on this young team he's one of the elder statesmen among Houston's position players, and gets a kick out of seeing the rookies succeed.

"I'm really only like two or three years older than those guys, but I've been here a little bit more and I get excited when they do good," he said.

Houston returns most of its team from last season and Altuve loves the chemistry in the clubhouse. He describes the 25-man roster as "25 players in one player" and promises that the Astros won't let up after last year's surprising success.

"Everybody is standing together," he said, "and we just do everything for each other."