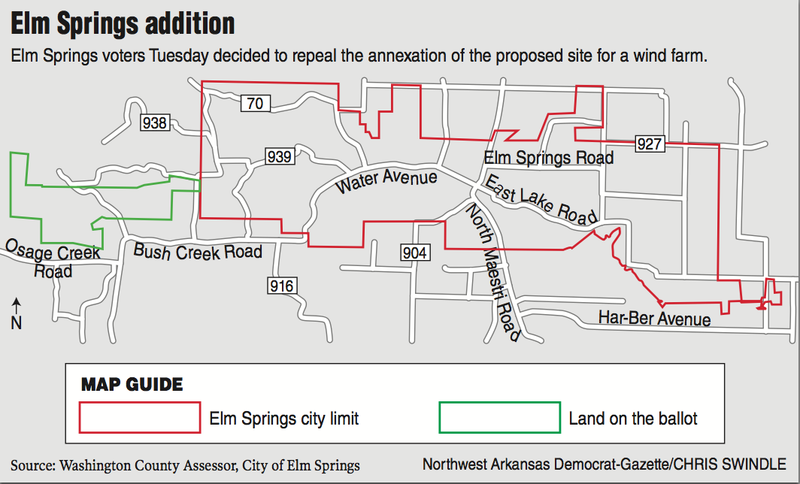 The company that for more than a year has pushed to build a wind farm west of Springdale is canceling the project in the wake of Tuesday's election, the company's CEO said Wednesday.

Elm Springs residents voted 483-273 Tuesday to repeal the town's annexation last year of the acreage for the proposed project. The vote, results of which are unofficial, means the 312 acres and the jurisdiction of the project will return to Washington County.

Opponents of the project had argued that the technology the company planned to use was untested, and that the county's planners were more experienced and better able than the city to decide if the project would be safe.

Dragonfly Industries International CEO Jody Davis said in a Wednesday afternoon interview that the company won't continue its push with county officials and will move on to other projects.

Davis said a more detailed public statement on the company's decision would be forthcoming, but none arrived by Wednesday evening.

Opponents of the wind farm project were jubilant that their nearly 16-month fight was over.

"It feels wonderful," said Jonathon Hamby, who lives next to the land in question just outside the Elm Springs city limits and helped rally the opposition. "It feels like redemption. It feels like all the things that we have been saying all along have come to light."

Mayor Harold Douthit, who supported the project as a way to help the town of about 1,700 residents grow, said he was ready to move on, too.

The plan centered on the company's unusual turbine design, which would cover the blades in cylindrical shells and resemble jet engines.

Davis and others with the company said the shells would make the turbines efficient enough to produce energy from even a light breeze and would solve problems that have plagued other designs. The officials added, however, that they hadn't actually tested a physical prototype of the design.

The company's proposal was the third attempt in the past decade to build a wind farm in Northwest Arkansas, where wind speeds are much lower than in Texas, Oklahoma and other wind power-producing states.

In 2008, Kansas-based TradeWind Energy sought to erect 150 turbines in Searcy County, according to the Harrison Daily Times. That same year the company also considered a wind farm in Benton County. Both projects fell through because of environmental concerns or lack of buyer interest.

A handful of other companies across the nation have proposed turbine-shrouded designs in recent years, but wind power industry officials and engineers are skeptical of them.

"Somebody independent should verify that they do what they claim to do," said Jim Manwell, director of the University of Massachusetts Wind Energy Center. "Otherwise I wouldn't believe it."

Neighbors of the proposed site west of Elm Springs also were skeptical of the idea. They argued that the technology was untested and possibly harmful to people's health and to property values.

"We might not be so against it if we knew, if we really knew," Frieda Rogers said last March. "We don't have answers for anything."

At a packed Town Hall meeting last spring, Dragonfly Industries representatives assured residents that the technology was sound and that the project would go forward with or without annexation into the city. But opposition continued to grow, even after the City Council approved the annexation in the fall.

Opponents gathered 180 signatures in the city to put the issue to a public vote.

Adding to the opponents' skepticism were the backgrounds of Davis and Cody Fell, who represented Dragonfly Industries at several meetings. Seven years ago, Davis pleaded guilty to embezzling about $785,000 in federal court in Oklahoma, and both men admitted to hot check violations in Arkansas in the past.

Davis has said he paid for his mistakes and grew from them. Fell hasn't publicly commented about them.

Hamby argued that the past convictions added to skepticism about the wind farm project. Davis sued Hamby and his wife for defamation in Washington County Circuit Court. Judge John Threet dismissed the suit Monday after Davis didn't respond to Hamby's motion to dismiss the case.

Alderman Kevin Thornton, who had taken a wait-and-see approach throughout the dispute of the wind farm, said he supported trying to make wind power work and wants the city to grow. Dragonfly Industries could have had better results if its representatives had shared more information and plans, he said.

"I have to appreciate my colleagues at the City Council and Planning Commission. They have been through a lot during this process, and I think they ought to be commended for acting in the professional way that they did," Thornton said. "I'm glad it's over."