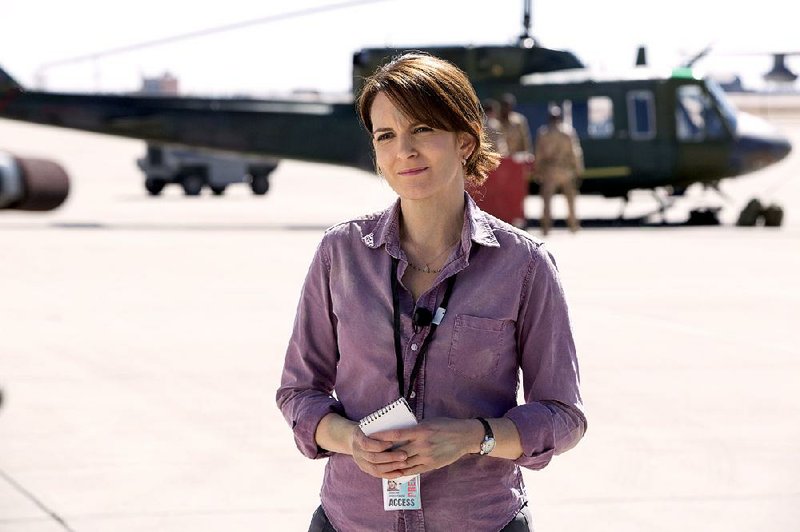 What always becomes blazingly clear whenever you watch this sort of behind-the-scenes drama about a social ecosystem built around a high stress, ultra dangerous job (think war, hospitals, NGOs) is no matter the circumstances and stakes, humanity will always react the same irresponsible, reckless way. The higher the stress quotient, the more people will have a need to relieve the pressure by exhibiting insane, silly and often rash behavior. Throw into that mix the highly competitive atmosphere of an international newsroom representing multiple outlets, and you suddenly have a recipe for almost complete anarchy.

This is much of the point of Kim Barker's memoir of wartime, The Taliban Shuffle: Strange Days in Afghanistan and Pakistan, which has been adapted and standardized in Whiskey Tango Foxtrot by the directing team of Glenn Ficarra and John Requa: When people are thrust into an insane situation, we adapt by making the insane seem normal in our day-to-day lives.

In the film, Kim is played by Tina Fey, who presents the right mix of sardonic wit and steely resolve to play the character, but the film falls into the trap of problematic tonal shifting as it moves from straightforward comedy to wartime drama and back again. As is made all too abundantly clear by the end, we are to understand the character has learned an important life lesson (in one of its more shameless moments, the film actually ends with the telltale "knowing smile" from its protagonist as she drives down the road), but it's put to us so clumsily it doesn't hit right, a problem the film suffers over and over again.

Kim starts out as a news desk editor, content to live her single life in New York with a serious boyfriend (Josh Charles), and travel to and from work and to the gym on a daily basis; but when the station she works for finds itself shorthanded for on-the-ground reporters as the Afghanistan war heats up, she's drafted to head overseas to Kabul. At first, the place is so alien and bewitching, Kim has a hard time finding her footing, but soon enough she's united with a team -- cameraman Tall Brian (Nicholas Braun), interpreter Fahim (Christopher Abbott, sporting an impressive Afghan beard and accent) and security man Nic (Stephen Peacocke) -- and begins to make waves on the battlefront, getting embedded with a platoon under Gen. Hollanek (Billy Bob Thornton), who takes a shine to her moxie and feeds her quality intel.

In fact, before too long, everyone has taken a shine to the iridescent Kim, including Tanya (Margot Robbie), her direct journalistic competition in their Kabul hotel; Ali Sadiq (Alfred Molina, also decidedly not Afghan), the acting attorney general of the Islamic Republic, who very much wants to take her to his bed chamber; and Iain (Martin Freeman), a Scottish photographer who slowly begins to court her more seriously. Through it all, Kim remains steadfast in her journalistic standards but socially, the constant grind of wild partying broken up by bouts of incredible danger (gunfire is commonplace at night and bombing runs happen as a routine) begins to take its toll on her psyche. As the years roll past, she starts becoming institutionalized to the violence and random chaos the war brings her, until it feels like her real home -- at least for a time.

It plays like a comedy for the first half, using Fey's sly deliveries to score some giggles, but as Kim becomes more and more entranced with the war around her the film starts to unspool a bit, playing things a bit too on the nose without bringing us any further insight. When Robert Altman's MAS*H hit in 1970, it was the perfect time to capture the country's ambivalence toward war with its biting satire. This film is too gun-shy for such an approach: It wants to play it straight but have it both ways, which creates an emotional vacuum. It's not that you don't care about Kim, it's that we know almost beat for beat exactly what her adventure is going to amount to in the end. In the memoir, Barker adroitly uses her guilelessness as a kind of stand-in for America in its ignorance about Afghan culture and misunderstanding about the war; the film wants her to be a stand-in for the standard Hollywood trope of woman-learning-life-lessons.

By the time she uses all her gained wisdom and connections to free a friend from the Taliban after a kidnapping, we know she has just used all her ace cards and will be folding up and going home, as surely as we know she'll see the professional betrayal of one of her close friends in Kabul as a sign that she's not willing to go as far into such twisty duplicities to further her career. Given a backdrop of complete anarchy, she finally finds her grounding and reinvests in herself. It's just a shame that the film sees only one way to represent its plucky heroine and feels the need to give her such a sweetly dishonest benediction before the closing credits.

The shooting location (New Mexico), reliably white-bread Hollywood casting and blase tone speak to the larger issue the film has: There's the prevailing sense that it wants to take the easy way out. Films such as The Revenant might take things to the opposite extreme, but when a film built around the absurd excesses of covering a wartime occupation constantly defaults to retreating back to its comfy American hotel, the filmmakers aren't really putting much at stake. Like a CGI-choked action flick, there's the sense that Ficarra and Requa simply didn't want to bother with complicating things for themselves. I can't say I would have had a different impulse -- true of most of us, which turns out to be something of the film's actual point, oddly enough -- but those low stakes seriously dampen its fire. Shooting for Catch-22 they end up instead with something closer to In the Army Now.