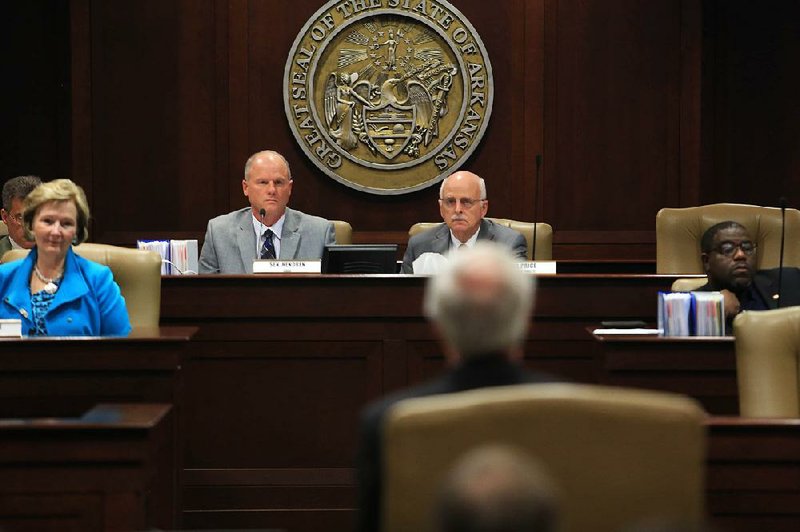 In a 10-2 vote, a state legislative task force on Monday expressed support for continuing health coverage for more than 267,000 low-income Arkansans under the state’s expanded Medicaid program, but it split on whether the state should turn to managed-care companies to reduce the cost of caring for the disabled and mentally ill.

The votes came after Sen. Keith Ingram, D-West Memphis, complained about the Republican governor having too much influence on the panel.

“A feeling shared by many is that the governor has already decided his course of action regardless of the task force recommendations,” he said.

Rep. Reginald Murdock, D-Marianna and a vice chairman of the panel, did not vote on the managed-care issue. He said he likes elements of both proposals but doesn’t fully support either one.

The split means the Legislature likely will decide the issue in a special session next month with no recommendation from the task force, the panel’s Senate chairman, Jim Hendren, R-Sulphur Springs, said.

Although the task force will meet again on March 29, Hendren said he doesn’t expect it to vote on the managed-care issue again unless a consensus emerges.

Hutchinson said in a statement that he was pleased by the task force’s support for keeping the state’s expanded Medicaid program, which would be called Arkansas Works, and “optimistic” that the full Legislature will approve it.

He said there was “significant support” for his plan to use managed care and he looks forward to “working with the Legislature to finalize the best approach for Arkansas.”

The Legislature formed the task force last year at Hutchinson’s request to recommend changes to the Medicaid program, including the so-called private option.

Under the private option, the state uses Medicaid funds to buy coverage on the state’s federally run health insurance exchange for adults who became eligible for coverage under the Medicaid expansion approved by the Legislature in 2013.

The expansion, authorized by the federal 2010 Patient Protection and Affordable Care Act, extended coverage to adults with incomes of up to 138 percent of the poverty level: $16,243 for an individual, for instance, or $33,465 for a family of four.

Under Arkansas Works, Hutchinson has proposed charging premiums of about $19 a month to enrollees with incomes of at least the poverty level, referring unemployed enrollees to job-training programs and using Medicaid funds to subsidize jobbased coverage for enrollees who are employed.

In December, Hutchinson said he also wanted to make changes in the traditional Medicaid program that would reduce the expected growth in spending in the program by about $835 million over five years.

Because the federal government pays about 70 percent of the cost of the program, reducing spending by $835 million would save the state about $250 million, or about $50 million a year.

That’s roughly how much a state consultant predicted in January that Arkansas would have to pay to support the coverage for the expanded Medicaid population starting in 2020, when the state’s share of the cost will reach its maximum of 10 percent.

The federal government has paid the full cost of coverage for the expanded Medicaid population since the coverage started in 2014.

Arkansas will start paying 5 percent of the cost next year. Its share will then rise every year for three years.

On Monday, on the basis of updated projections, the task force’s consultant predicted that the state’s net cost will be less than expected and that the program will have a positive impact on the state’s budget through 2021.

Although the state’s share of the cost for the fiscal year that ends on June 30, 2021, would be $196 million, it will save $182 million that year through reduced spending in the traditional Medicaid program and on medical care for the uninsured, according to the projections by The Stephen Group of Manchester, N.H.

At the same time, premium-tax revenue from the private option plans will add $46 million to the state’s budget, for a net positive impact of $32 million.

The influx of federal funds would also increase other state tax collections that year by $72 million, bringing the overall benefit to the state budget that year to $103 million.

The changes reflect a lower-than-expected cost for providing coverage to the expanded Medicaid population and a greater-than-expected number of people who are being covered by the private option, with the federal government paying the full cost, instead of traditional Medicaid, the consultants said.

The task force said in its recommendation to the Legislature that ending the state’s Medicaid expansion would “result in a substantial increase in state Medicaid and uncompensated care expenditures over the next four years.”

The Legislature should “consider” Hutchinson’s proposed changes to the program, and Hutchinson should present legislation on the matter during the special session, the task force agreed.

Hendren supported the recommendation along with the panel’s other chairman, Rep. Charlie Collins, R-Fayetteville. Other supporters were Murdock, Republican Sens. John Cooper of Jonesboro, Jason Rapert of Bigelow, Jonathan Dismang of Searcy and David Sanders of Little Rock, and Republican Reps. Justin Boyd of Fort Smith, Joe Farrer of Austin and Kim Hammer of Benton.

Sen. Cecile Blesdoe, R-Rogers, who is the other vice chairman, and Rep. David Meeks, R-Conway, voted against the recommendation on continuing the Medicaid expansion.

Ingram and Ferguson said after the meeting that they support continuing Medicaid expansion but wanted the task force to vote on the managed-care recommendation first.

Chesterfield proposed voting on the managed-care issue before Arkansas Works, but her motion to change the order of the agenda failed by two votes short of the twothirds majority needed to pass.

She said she recognizes the benefit to the state budget but opposes the Affordable Care Act and wants to reflect the will of her constituents, many of whom also oppose the law.

“I’m here to represent them,” she said.

Under Hutchinson’s proposal for the traditional Medicaid program, the state would pay managed-care companies a fixed amount per recipient to provide benefits to the developmentally disabled and mentally ill.

The managed-care opponents proposed hiring a company to coordinate patient care for those groups but have the state continue paying the providers directly.

Under both proposals, the state would hire managed care-companies to provide dental benefits and continue using fee-for-service Medicaid to pay for medical care for low-income children.

However, the state would adopt measures proposed by the Arkansas Health Care Association, which represents the nursing-home industry, that the group says would save $250 million over five years in spending on longterm care for the elderly.

According to The Stephen Group, Hutchinson’s plan would reduce the growth of Medicaid spending by $1.4 billion over five years, while the alternate plan would save $1 billion.

Gray said managed-care companies would cost the state more than the companies the state would hire under the alternate proposal.

She said she fears managed-care companies would save money by cutting provider payments and limiting benefits.

Hendren said he doesn’t have confidence that the state would be able to curb the growth of its Medicaid spending without hiring managed-care companies.

“I’m not convinced our state knows how to manage anything well,” Hendren said.

A matter of degree

Hiring a company to manage care for high-cost patients in the state’s traditional Medicaid program could result in savings of more than a billion dollars, a consultant told the state Health Reform Legislative Task Force on Monday. The task force left up to the full Legislature a decision on which of two proposals to choose.

Under managed care, the state would pay a fixed amount for each Medicaid recipient to provide the recipients’ care.

Under managed fee for service, the state would still pay doctors and other health care providers directly but would hire one or more companies to help coordinate the services.