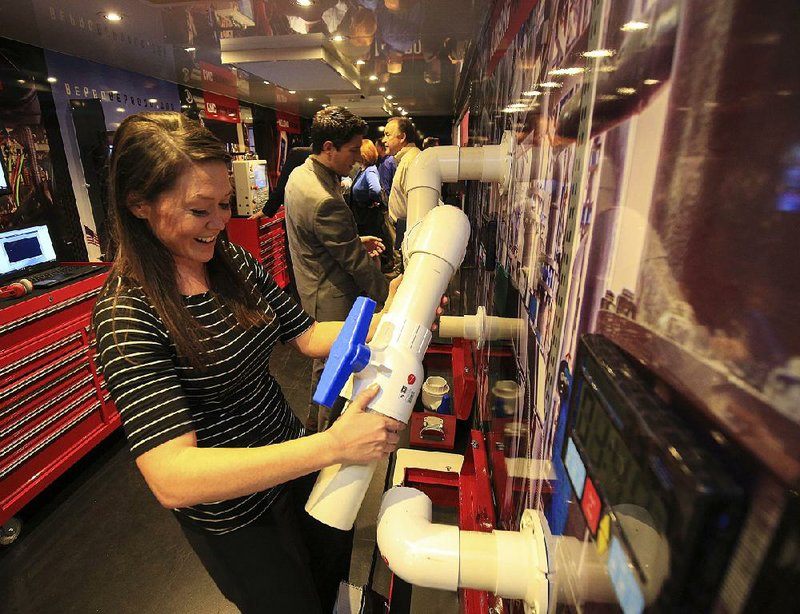 Jen Williams (left), with Truck Centers of Arkansas, tries to complete a plumbing puzzle in the new “Be Pro Be Proud” mobile unit Tuesday in Little Rock.

Thousands of jobs are available in Arkansas with salaries above the state's average income but there are not enough qualified workers to fill them, state leaders said Tuesday.

Gov. Asa Hutchinson and representatives from the Arkansas State Chamber of Commerce, the Delta Regional Authority and Wal-Mart announced the start of an initiative, "Be Pro Be Proud," to tell Arkansans of the relatively high-paying jobs.

"A skills gap, generally defined as the inability of companies to attract and retain qualified, highly skilled employees, has widened with increasing speed over the past several years," said Randy Zook, chief executive officer of the state Chamber of Commerce. "Companies have jobs they cannot fill while people cannot find jobs they want and can do. The gap impacts companies large and small from the Delta to Northwest Arkansas."

Hutchinson said he's an advocate for training the state's workforce to reduce the skilled-trade jobs gap.

"I encourage everyone to be a part of the 'Be Pro Be Proud' movement," Hutchinson said. "It shows that we are serious about educating parents and young people about these career paths that are essential to our state's economic growth."

The older generation of skilled workers is retiring, and that's the big reason for the jobs gap, Zook said.

"People are aging and not enough kids are coming along who are interested," Zook said. "Arguably, there are at least 20,000 high-wage jobs that are available."

There clearly are some jobs and skills mismatches, said Michael Pakko, chief economist at the Institute for Economic Advancement at the University of Arkansas at Little Rock.

"For years, I have heard executives at Arkansas' trucking companies talk about seeking truck drivers," Pakko said. "So it is a real phenomenon. There is a tendency to encourage young people to go to college and find a job that requires a college degree. So some of these technical skills that don't require a college degree sometimes get overlooked."

Much information about the jobs and current openings is available at beprobeproud.org, a website developed to promote the higher-paying jobs.

Some of those jobs can grow into six-figure salaries, Zook said.

"They can because many do, and in many cases in less than a decade," Zook said.

More than 82 percent of manufacturers report a moderate or serious shortage in skilled production workers. About 44 percent of the average, entry-level salaries for the open positions start at or above $31,000.

A tractor-trailer rig with a "workforce workshop" will travel the state to publicize the jobs. The mobile unit soon will begin visiting small school districts in northeast Arkansas, Zook said.

The mobile unit will be at the Hot Springs Convention Center on April 12-13 and at Toad Suck Daze in Conway on April 29. When the school semester ends, the truck will travel to festivals in the state, Zook said.