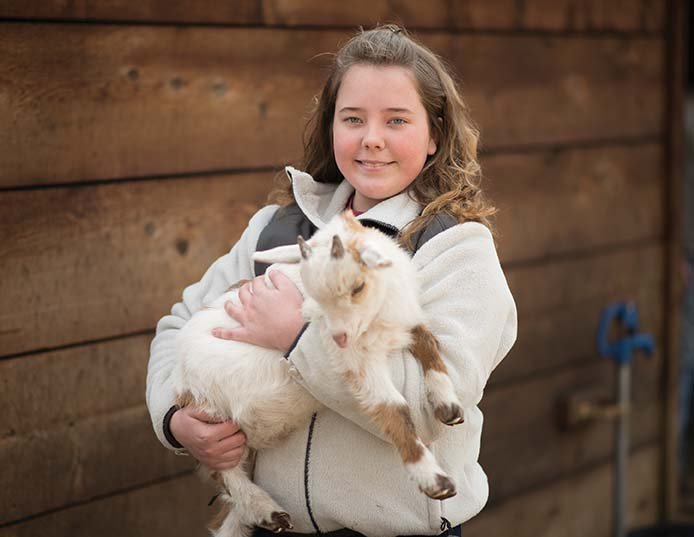 Gracie Kate Lee, 11, of Clinton is a Mutt-i-grees National Student Ambassador. She has a menagerie of animals, including this Nigerian Dwarf goat she calls Mr. Nibbles Jr. Gracie recently attended a two-day celebration in New York City, where she received a Crystal Collar award from the North Shore Animal League America, which sponsors the Mutt-i-grees Curriculum in schools across the United States.

CLINTON — Visitors to the home of Gracie Kate Lee, 11, might have expected to meet her parents, and even her sister, but they might not have expected the menagerie of animals that quickly made their presence known when a car pulled up in the driveway, and even more so, when there was a knock on the door.

Sandy, a yellow mixed Labrador, silently greeted visitors in the driveway. Flower, a beagle; Dempsie, a black dachshund; and Bob, a red dachshund, vocally greeted visitors as they prepared to come in the back door. A big white cat, Mama Kitty, looked up from her spot in the sun on the carport. Mr. Nibbles Jr., one of six Nigerian Dwarf goats, bleated out a welcome from a fenced area near the 20-plus chickens, many of which produce fresh eggs daily.

Gracie loves them all.

“I’ve always liked animals,” Gracie said. “I want to be a veterinarian.”

It’s this love of animals that led Gracie to become actively involved in Mutt-i-grees, a national curriculum now being taught in the Clinton School District, as well as in Shirley and South Side Bee Branch schools. Recently, Gracie was named one of five 2015-16 Mutt-i-grees National Student Ambassadors.

The Mutt-i-grees Curriculum was developed in 2008 by the North Shore Animal League America’s Pet Savers Foundation, in collaboration with Yale University School of the 21st Century, and funded by the Cesar Millan Foundation.

Linda Sullin, Mutt-i-grees facilitator for the Clinton School District, said this curriculum seeks to engage students and promote social and emotional competence, academic achievement and awareness of the needs of shelter pets, also known as Mutt-i-grees.

Gracie is a sixth-grader at Clinton Intermediate School. She is the daughter of Justin and Caroline Lee and the

sister of Anna Lee, 14, who is an eighth-grader at Clinton Junior High School and also an animal lover. Gracie is the granddaughter of Eric and Glenda Stagg and Joe and Marylou Lee, all of Clinton.

Sullin said Gracie was chosen as a student ambassador “because she is a devoted animal lover who has been making a difference in the lives of shelter pets since she was just 7 years old.”

Gracie joined the other national student ambassadors in November for a trip to New York City. She was accompanied by her maternal grandparents, the Staggs, as well as her school principal, Elaine Treadaway, and school counselor, Jayme Brown.

The student ambassadors visited the North Shore Animal League America Shelter in Port Washington, New York, which is said to be the world’s largest no-kill rescue and adoption organization.

During their visit, they were presented with citations from the state of New York by Assemblywoman Michaelle Solages. They were also honored at the League’s Get Your Rescue On gala in New York City, where they were presented with Crystal Collar awards by North Shore Animal League America National Spokesperson Beth Stern for their efforts to benefit homeless animals as part of the Mutt-i-grees Curriculum.

Gracie said other highlights of her trip included meeting TV personalities Rachael Ray and Howard Stern (whose wife, Beth, had presented Gracie with the award) and attending the Broadway show Matilda the Musical.

At home in Clinton, Gracie works with animals in various ways. She volunteers at the Van Buren County Animal Shelter, collects donations for homeless animals and comforts animals at spay/neuter clinics. She had a lemonade stand one summer and has made bracelets and crocheted scarves and headbands to sell to benefit local animal shelters.

Gracie is active in the MUTTS (Motivated Understanding Thoughtful Teenage Students) Club at school. Sullin said the idea for MUTTS Clubs began in 2011 in the three school districts in Van Buren County when high school students said they would like to form a school-based club that could take part in Mutt-i-grees service-learning activities and organize fundraisers to raise awareness for shelter pets.

“The clubs have now grown into several states,” Sullin said.

As a MUTTS Club member, Gracie participated in a summer camp last year where the students completed service-learning projects such as washing and walking dogs, cleaning out kennels and folding towels at the local shelters, as well as making crafts with the residents at a local nursing home. Last fall, Gracie joined students from the MUTTS Clubs at Clinton and South Side Bee Branch schools to volunteer at a mobile spay/neuter clinic.

As part of her duties as an ambassador, Gracie helped coordinate a Mutt-i-grees Get Your Rescue On retreat last October for eight fifth- and sixth-graders. This was part of a pilot program focused on community engagement. The students visited a local

veterinarian’s office, met with the president of a local bank and were treated to lunch with the mayor.

Gracie is now working to coordinate the students who will help with the North Shore Animal League America’s Tour for Life that will be set up in the parking lot of Backyard Antiques in Clinton from 10 a.m. to 4 p.m. April 7.

“They will bring a mobile adoption unit and help the Van Buren County Animal Shelter find homes for their animals,” Gracie said. She said the event might also feature a bake sale, special adoption fees, dog baths and various vendors.

In school, Gracie likes science and math the best.

Gracie said she thinks the students who are involved in the Mutt-i-grees Curriculum enjoy the experience.

“I like saving animals,” she said, “and I like to promote decreasing the overpopulation of pets by spaying or neutering your animals.”