One of a kind 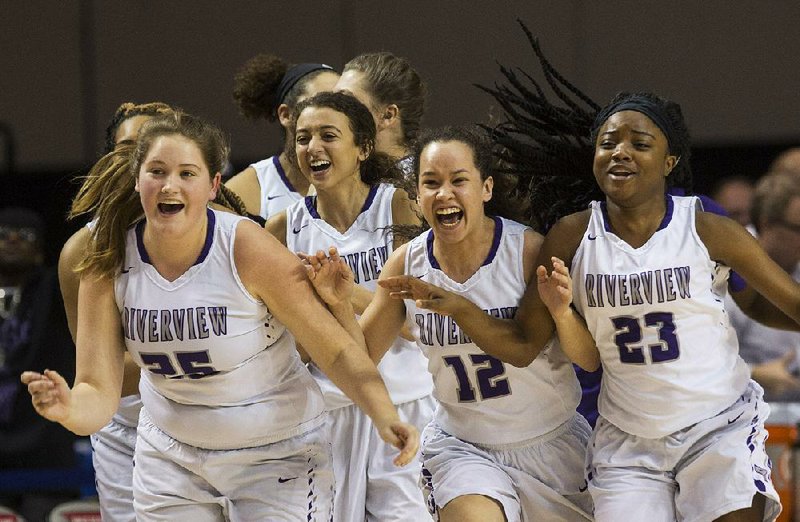 Riverview players celebrate after Friday’s victory over Central Arkansas Christian in the Class 4A girls final. Riverview finished the season 38-0.

HOT SPRINGS -- Riverview is the state's only undefeated team in girls high school basketball this season. 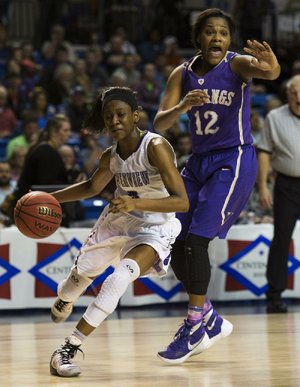 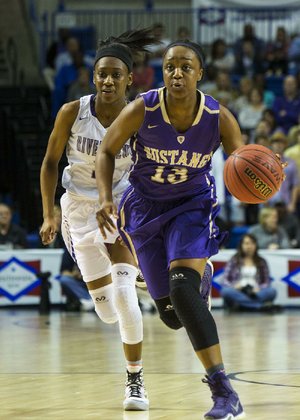 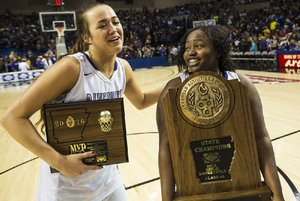 Photo by Melissa Gerrits
Riverview's Madison Riley, left, the team's MVP and Chacoila Brown, hold the teams trophies after winning their 4A championship game against CAC at the Hot Springs Convention center March 11, 2016. 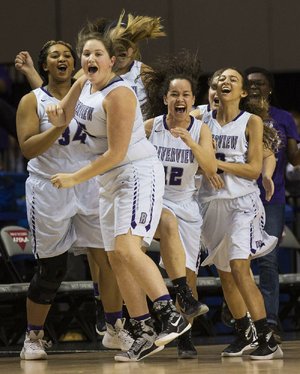 The Lady Raiders capped a 38-0 season with a 64-58 victory over Central Arkansas Christian on Friday afternoon in front of 3,945 at Bank of the Ozarks Arena.

This is Riverview’s second consecutive Class 4A state championship. The Lady Pirates beat Ozark in the 2015 4A final. … Riverview went 5-0 against Central Arkansas Christian this season, including two regular-season victories and victories in the 4A-2 District and 4A-East Regional tournaments. … CAC was making its fifth state championship game appearance. The Lady Mustangs won state titles in 2005, 2006 and 2007.

Riverview Coach Ryan Smith, who has led the Lady Raiders to 49 consecutive victories since a Jan. 30, 2015, loss to CAC, was overcome by what his team accomplished Friday.

"Perfection, it doesn't hardly ever happen," Smith said. "These girls, that was their 49th game in a row they've won. Players make plays. They keep making plays every single game. We need a bucket, somebody steps up.

"That's what makes this group so special. They're so balanced. Everybody can score. They're all great ball handlers. Most importantly, they love each other."

Riverview went 5-0 this season against their 4A-2 Conference rivals this season. Young wasn't concerned about facing CAC a fifth time in the Lady Raiders' biggest game of the year.

"Fifth time's a charm, right?" Young said. "I felt like we had it when we first walked in here."

With Connecticut women's associate head coach Chris Dailey in attendance, sophomore guard Christyn Williams -- the nation's No. 3 recruit in the Class of 2018, according to ESPN.com -- had a game-high 35 points and grabbed eight rebounds in the loss for CAC (24-14). Williams shot 11 of 26 from the floor and 10 of 14 from the free-throw line.

CAC cut the lead to 47-43 with 6:44 to play on sophomore forward Jenna Davis' layup. Riverview answered, with Young scoring nine of the Lady Raiders' next 11 points to stretch the lead to 58-49 with 3:10 left.

The Lady Mustangs weren't done, as Williams hit two three-pointers, her second one pulling CAC within 58-57 with 45 seconds left. Riverview, though, closed out the game at the free-throw line, making 6 of 8 to seal the victory.

Williams did as much as she could to help the Lady Mustangs win their first state title since 2007, but it wasn't enough to knock off a Riverview team that has been a thorn in CAC's side.

Riverview extended its lead to 27-15 on Riley's three-pointer with 5:57 left in the first half. It was the Lady Raiders' largest lead of the game as they went into halftime with a 32-23 advantage.

The Lady Raiders led 43-34 with 1:34 left in the third quarter, but CAC cut the lead to 45-39 by the end of the quarter with a three-point play by junior forward Lauren Peoples (12 points) and a layup by Williams.

CAC Coach Steve Quattlebaum had coached against Riverview four times this season before Friday's state championship game. What he saw in the first four games was the case again at Bank of the Ozarks Arena.

"There's no one out there that you don't have to guard," Quattlebaum said. "It makes them really tough to defend. They're a good team. They're well-coached.

"We enjoy playing against them, but we would've liked to have won it at the end. We were close."

Print Headline: One of a kind