The Perks of Being a Wildflower 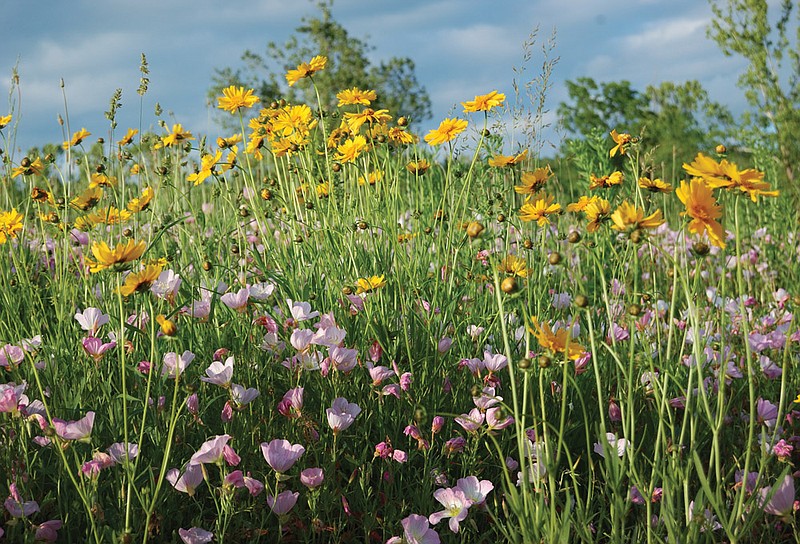 We're almost to Norfork Lake, and Anne Kayti Ewing is worried about dirt. Or really, she’s worried there won’t be any. If the soil’s pH is too low—if it’s too acidic—no problem. They can add some lime to balance it out. And if some notoriously hard-to-kill Cynodon dactylon (better known as Bermuda grass) has taken root, well, they can deal with that, too. But if there’s no soil at all on top of the bluff we’re headed for, this whole trip could be a complete bust.

Ewing leans over to Henry Langston, the north-Louisiana-bred good ol’ boy behind the wheel, as he navigates the Arkansas State Highway and Transportation Department work truck through Salesville—which, after a wrong left turn, turns out to be harder than you’d think. “I would assume she knows it needs soil, right?” she asks of the woman we’re meeting.

They won’t know until they see it for themselves.

The mandate for the highway department’s environmental division—of which Ewing and Langston are both employees—is to make sure every new construction, lane addition or maintenance project complies with all the required state and federal environmental regulations. This means one day they can be up to their elbows in a south-Arkansas bayou surrounded by water tupelo, studying how a new passing lane on a nearby highway could affect the watershed. And then the next, they’ll be deep in the Ozarks restoring a stream to mitigate the damage from a paving job elsewhere in the watershed. Today, though, is something of a side project. Today, they’re working Operation Wildflower.

It goes like this, Ewing explains from the passenger seat: An interested town, garden club or—as is the case today—private citizen reaches out to the Highway Department, and if the interested party’s willing to front the cost of the wildflower seeds, the department will sow them along a stretch of highway of the donor’s choosing. For the towns, it’s often about beautifying the land around a city. And for the garden clubs—well, they just love wildflowers. But before any of that happens, Ewing has to scout the location, test the soil and develop a list of native species that will thrive in the selected location—say, luscious red Lobelia cardinalis (cardinal flower) for wet roadside ditches; Echinacea purpurea (purple coneflower) for dry, sandy Ozark glades.

The Highway Department founded Operation Wildflower in 1983 as part of a national initiative launched by first lady Lady Bird Johnson in 1973 to make the nation’s roadsides more beautiful, more natural. (“She was famous for saying she wanted Vermont to look like Vermont and Texas to look like Texas,” Ewing says.) But initially, the project wasn’t a success. In the ’80s and ’90s, everyone wanted their roads to look like their front lawns, like the 18th hole of their local club, she explains, almost completely turned around in the passenger seat, her clean fleece pullover and brown ponytailed hair contrasting starkly with Langston’s blue Scott Volunteer Fire Rescue hoodie and silver hair. This meant a lot of non-native species and a lot of work.

“Think about all those thousands of miles of road that need to be mowed and maintained,” Langston chimes in.

But over the past two decades, there has been a shift. The public has come around to Mrs. Johnson’s way of thinking. These days, they want their roadsides a bit on the wild side, and the department is following suit. In 2003, it went ahead and added six native wildflowers to its standard grass seeding mix and had already designated some 1,000 miles of highway as wildflower routes because of the large, naturally occurring populations of flowers along the roads’ rights of way. Taken together, these programs not only help preserve native plant populations and create wildlife habitat, but also help save time and money. And Operation Wildflower missions, like the one we’re on, help the department engage the public in the work.

Up the river to the ridge and across the Norfork Dam on Arkansas 177, we find what we are looking for: a sweeping stretch of road and a woman waving. The property owner who called is finishing up the construction of a rental home. Soon, she plans to build some cabins close by and turn the place into a spot for weddings and affluent fly fishermen hunting trout on the nearby White River, but first, she wants to do something about her property’s curb appeal. Around 2014, the department added a passing lane to the highway out front, and when it finished, it seeded the torn-up ground with the standard mix. Some wildflowers sprouted, and they were nice, but wouldn’t it be nice it there were more—like, a lot more? After a phone call or two, she was soon in touch with Ewing and Operation Wildflower.

The good news for Ewing is there is dirt, and it looks to be good dirt. As Langston takes samples with his soil probe—a long T-shaped stick with a hollow cutout on the long end—he pulls up plug after plug of red Arkansas clay so thick the forestry and soil-science Ph.D. has to stop and scrape the probe clean with a pocket knife.

“This is how you learn all this stuff,” he says as he works the probe. “Just get out here and poke holes. It is like anything else. You can be in the classroom dawn to dark, but your education don’t come out until you get into the field. After all these years, I still see stuff. Oh, that’s what that was. Oh, that’s what’s going on.”

He collects two lines of samples along the border between the owner’s property and the road in separate buckets, which will make their way to the University of Arkansas’ soil-testing lab in Marianna to analyze the levels of PH and organic matter, as well as nitrogen, phosphorous and potassium—the major nutrients plants need. From the eye test alone, he can tell there isn’t much organic matter, but unless there are any other surprises, there doesn’t seem to be much to worry about.

Farther up the slope, Ewing is coming up with a list of suitable species, ones that will thrive in the poor soil atop the hot and dry ridge, maybe even Asclepias tuberosa (orange butterfly milkweed) to provide much needed food for the monarchs that migrate through the state each year. The seed sponsors get the final pick off the list she compiles, and once they’ve made their choices, she’ll direct them to two wildflower farms in Arkansas, two in Texas and two in Missouri to purchase the seeds (for around $200 an acre).

Today’s seed sponsor, though, is flexible—she just wants to get the flowers sowed as quickly as possible so they’re blooming just as the construction is completed. It shouldn’t be a problem, Ewing tells her. In the South, fall is typically the best time to plant wildflowers, but it’s been such a warm winter, they can go ahead and plant.

Despite those few minutes of worry on the drive up, the site has turned out to be pretty much perfect. It isn’t bare rock, and there’s no Bermuda grass to be dealt with or Centaurea maculose (spotted knapweed), an invasive species so virulent that it makes any effort to plant wildflowers futile, an automatic no-go. The native grasses seeded after the road expansion won’t out-compete the wildflowers, and if Ewing can get the flowers established—and the local district gets the mowing schedule right—the population will be self-sustaining almost indefinitely.

But for today, their work is done. It’s not long until we’re back in the truck heading south, and Anne Kayti Ewing starts worrying about rain. The more she thinks about it, the more she is afraid heavy spring storms might wash away the seeds. But if they plant the seeds in fall, some species will sprout roots before going dormant, anchoring them against the next year’s rains (and besides, others won’t germinate unless they experience cold weather anyway). She’ll have to break the bad news to the donor that it’ll be best to wait till autumn, though maybe they could plant some of the seed this spring, perhaps a few perennial plugs to give the roadside an instant pop of color, she says, almost to herself. That could be just the ticket.