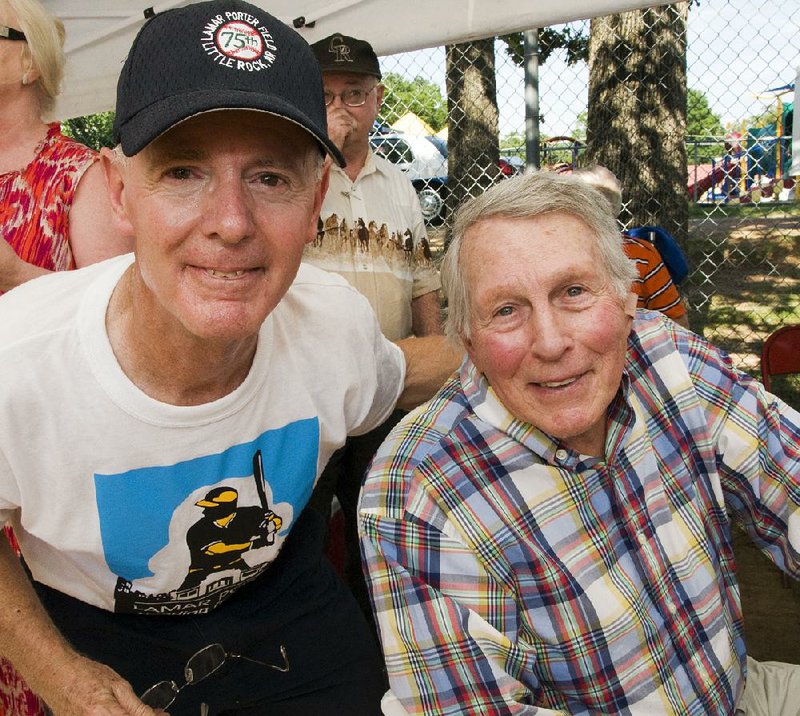 Brooks Robinson, right, is shown in this file photo with Jay Rogers.

WASHINGTON -- In 1963, Baltimore Orioles third baseman Brooks Robinson downplayed the mark he would leave on the game, telling Sport magazine: "Fifty years from now, I'll be just three inches of type in a record book."

But the "Human Vacuum Cleaner" was better at snagging line drives than predicting the future.

The Congressional Baseball Caucus made that clear Tuesday, when it honored the 78-year-old Arkansan.

Half a century after the Hall of Famer's humble prophecy, Sport magazine has died. Baltimore Memorial Stadium has been demolished. Major League Baseball has been eclipsed, in the ratings at least, by the National Football League.

But the Little Rock native and former Arkansas Gazette paper boy remains a hero -- not only in Maryland's largest city and Arkansas, but on Capitol Hill, too.

At Tuesday's reception, the former Most Valuable Player, World Series champion and 16-time Gold Glover received an enthusiastic, bipartisan welcome from lawmakers and their staff members.

The menu was simple and logical -- peanuts, Cracker Jacks and foot-long hot dogs.

The featured attraction was Robinson, who shared one story after another: Batting against Sandy Koufax with a championship on the line; watching Ted Williams smash a home run and circle the bases; and sitting out a week of spring training while he held out for a $500 raise.

"I never wanted to do anything in my whole life except play baseball. My dad was a pretty good semi-pro player, and I tagged along after him. I was a bat boy for several of his teams," Robinson told the crowd.

Asked about the greatest players he ever faced, he said: "[Mickey] Mantle,[Willie] Mays and [Hank]Aaron."

"It's been good, and I've enjoyed every moment of it," he said.

While he spoke, lawmakers and others circled around him, taking in every word. Politicians and their aides waited patiently while he autographed balls and glossy photographs.

"I've heard people say he was one of the greatest ball players of all time," the Hot Springs Republican said.

Robinson stuck with the same team for 23 years, beginning and ending his career with the Orioles organization. He played in 18 All-Star games.

And he never forgot that he was on a national stage.

"Whether you want to or not, you do serve as a role model. People will always put more faith in baseball players than anyone else," he said, according to Baseball-Almanac.com.

John Steadman, the late Baltimore News American sportswriter, once summed up Robinson this way: "There's not a man who knows him who wouldn't swear for his integrity and honesty and give testimony to his consideration of others. He's an extraordinary human being, which is important, and the world's greatest third baseman of all time, which is incidental."

U.S. Rep. Roger Williams, the co-chairman of the Congressional Baseball Caucus, said he jumped at the chance to welcome Robinson.

"Any time you get somebody of Brooks Robinson's class and status in baseball, and you have a chance to have him come in, you do it," the Texas Republican said.

Baseball is something Democrats and Republicans can agree on, Williams said, adding, "It's the greatest game there is."

The caucus was founded in 2013 by Williams and Democrat Mike Doyle of Pennsylvania. Williams, who coached the Republican team in that year's Congressional Baseball Game, played years ago in the Atlanta Braves' farm system. Doyle, a Pittsburgh Pirates fan, managed the Democrats.

The caucus plans to invite others.

"It helps me politically," he said. "I get to tell baseball stories instead of talking about taxes."