Teams got 'the shaft,' coach says 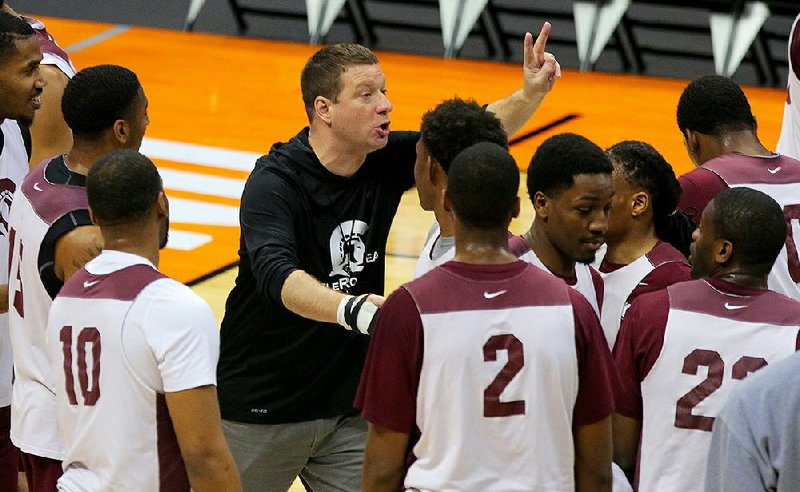 UALR Coach Chris Beard (middle) talks with his team Wednesday during practice at the Pepsi Center in Denver. Beard hurt his right hand after hitting a dry-erase board during halftime of the Sun Belt Conference Tournament final, but he said he’s ready for today’s game against Purdue. “If I had one leg and one eye, I wouldn’t miss it. I’ve worked my whole life to coach a game like this,” Beard said. ( Stephen B. Thornton)

DENVER -- Purdue Coach Matt Painter still feels like his team is under-seeded in the NCAA Tournament, but he said Wednesday that he doesn't think it will matter much when it meets UALR today at the Pepsi Center. 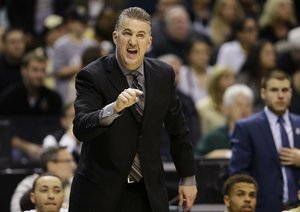 Photo by MICHAEL CONROY / AP
Purdue's head coach Matt Painter argues a call during the second half of an NCAA college basketball game against Michigan State in the finals at the Big Ten Conference tournament, Sunday, March 13, 2016, in Indianapolis. 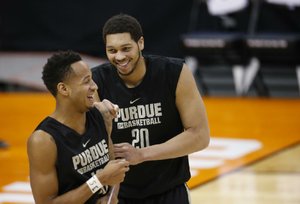 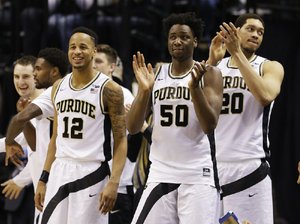 Photo by MICHAEL CONROY / AP
Purdue's Vince Edwards (12), Purdue's Caleb Swanigan (50) and Purdue's A.J. Hammons (20) celebrate during the second half of an NCAA college basketball game against the Illinois in the quarterfinals at the Big Ten Conference tournament, Friday, March 11, 2016, in Indianapolis. 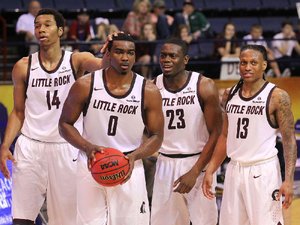 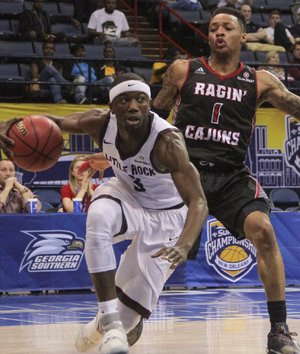 The Spartans and Hoosiers, Painter said, "really got the shaft."

"I don't think we got it as much," he said. "But if you look at our wins against NCAA Tournament teams, we've won eight games and you can look at the other seeds at the 4 and the 5 and we're up there pretty high with those wins."

Painter said he hasn't used disrespect from the committee as motivation, though. The Boilermakers (26-8) were ranked in the national top 10 at one point before a midseason slide, but have won five of their last six games entering the tournament.

"You can be nit-picky, you can focus on things that don't matter," Painter said. "I don't think this stuff matters a whole lot. It comes down to your matchup, you can move down to the four line and not get a better matchup. Right now, we've got a tough match with Arkansas-Little Rock."

"It's hard to get anybody as a group to play that well defensively in a short amount of time," Painter said. "So you have to give them credit."

UALR senior forward Roger Woods was named Most Outstanding Player of the Sun Belt Conference Tournament when he scored 19 points in the championship game against Louisiana-Monroe.

The challenge for the 6-5 Woods will be much different against Purdue, considering he's giving up several inches to one of the biggest teams in college basketball.

Purdue starts 7-0 center A.J. Hammons, 6-9 forward Caleb Swanigan and 6-8 forward Vince Edwards. The Boilermakers also bring 7-2 Isaac Haas off the bench. They don't play Hammons and Haas together much, but it is likely if Woods goes inside like he did Sunday, he'll always be meeting a 7-footer.

Woods, who averages 9.8 points, said that doesn't change his thought process, though.

"I'm not worried about it," he said. "I go into every game the same way: Just go out from the start of the game, get a feel of how they guard me, how I can guard them, how I can impact and play the game the best way I can."

One way UALR can get around Purdue's size is by utilizing its guards. The Trojans played some pressure defense during the Sun Belt Conference Tournament and senior guard Josh Hagins said it's an element that has improved over the season.

Purdue Coach Matt Painter said a successful UALR press aimed at creating turnovers would be tough for his team offensively and defensively. With 7-0 center A.J. Hammons and 6-9 forward Caleb Swanigan in the starting lineup and 7-2 center Isaac Haas coming off the bench, the Boilermakers are at their best when they get into their halfcourt defense.

"I've never had a team that the offense and the defense is connected as much," Painter said. "If we take care of the ball, if we take good shots, we're going to be a lot better defensively. That is so important for us. Their speed and quickness and their ability to make plays concerns us."

UALR Coach Chris Beard showed up Wednesday flashing a splint covering his right hand, the result of his hitting a dry-erase board during halftime of Sunday’s Sun Belt Conference Tournament final in New Orleans.

Beard was immediately asked about the injury, but the first-year Trojans coach took it in stride, even joking about his previous years coaching with the ill-tempered Bob Knight at Texas Tech.

“There was a chair there, and I thought briefly about using the chair,” Beard said. “But Coach Knight told me never to do that.”

The broken hand will heal in six weeks, Beard said, but it won’t affect him for today’s game against Purdue, his first in the NCAA Tournament as a Division I head coach.

“If I had one leg and one eye I wouldn’t miss it,” Beard said. “I’ve worked my whole life to coach a game like this. And I’m just so appreciative and thankful for our players and I intend to enjoy every moment and give our guys every chance we possibly can from a coaching standpoint to help them.”