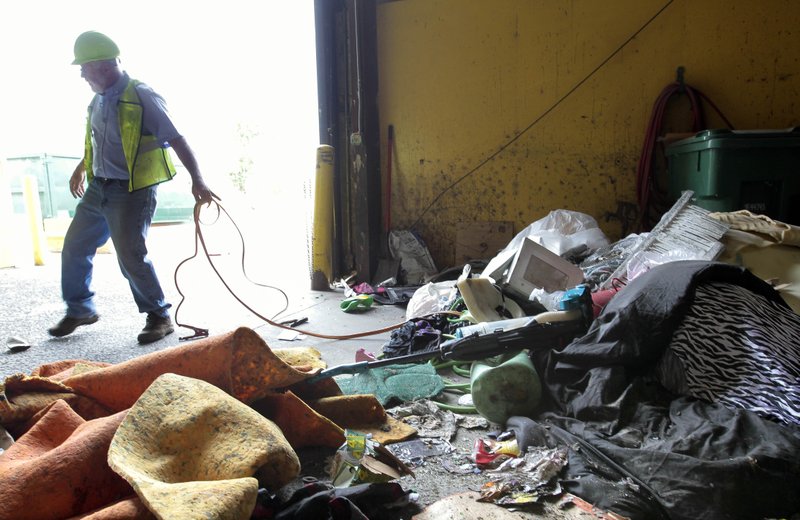 Arkansas Democrat-Gazette/BENJAMIN KRAIN Rusty Miller, Waste Management of Arkansas recycling plant manager, pulls items from a pile of unrecyclable materials that were not supposed to be put in residential city recycling containers in this November 2015 photo. Some of the items in the pile include a toilet, a microwave, a vacuum and several blankets and clothes.

About 40 percent of recycling loads are being thrown into the landfill instead of being recycled in Little Rock, North Little Rock and Sherwood, Pulaski County recycling officials said Thursday.

The loads are being thrown out because of growing contamination issues with recycling in the three cities that have curbside pickup.

Users of the program are trying to recycle items that are not recyclable, such as propane tanks, bowling balls, manhole covers or dirty diapers. The nonrecyclable items are considered contamination, and recycling workers often throw out loads of recycling picked up at homes to get rid of items that may have touched and ruined recyclable materials.

The single-stream system has led to a surge in homes participating in recycling but also to a jump in people attempting to recycle nonrecyclable items.

The Regional Recycling and Waste Reduction District -- a state agency also known as the Pulaski County Regional Solid Waste Management District -- and its contractor, Waste Management, will continue gathering data as to where improper materials are entering the recycling trucks, leading to contamination issues at the subcontractor's warehouse that sorts the recyclables.

George Wheatley, public-sector services manager for Waste Management, told the district's board Thursday that the company is working on technology that will detect specific households that are contributing contamination.

Wheatley said that starting this summer, truck drivers will have tablets and be able to document each home where they stop and, with some temporary help, determine whether that home's recycling bin had contamination in it.

Waste Management will implement the technology and acquire the data at no additional cost because its contract with the district has not been amended to include it.

Ronny Loe, assistant director of public works for Little Rock, told Wheatley that the company could choose not to empty recycling bins with contamination and that the city would not charge Waste Management the $50 fee for a missed pickup.

"We're not asking you to pick up contaminated loads," Loe said.

After obtaining better data on who is putting improper items in recycling bins, Waste Management and Regional Recycling and Waste Reduction District officials will discuss how to better educate residents on what they can and cannot recycle or create incentives for proper recycling.

One option might be removing recycling carts that repeatedly contain nonrecyclable materials, Wheatley said. Cities across the country have fined people for contaminating the recycling stream with nonrecyclable items.

"We're trying to create a new culture," he said.

District Deputy Director Carol Bevis said the district would explore doing a study with the University of Arkansas at Little Rock on how to address issues related to contamination.

The cost of such a study is currently unknown but may be discussed as a part of the district's 2017 fiscal year that starts July 1.

The data being gathered applies only to the curbside recycling program operated by Waste Management in Little Rock, North Little Rock and Sherwood.

Having to transport nonrecyclable materials to the landfill is an added cost for Waste Management because it requires paying unanticipated landfill fees per ton of material deposited, in addition to costs of using a truck, a driver and a bin to transfer dozens of loads each month.

In February, Waste Management took 479 tons of material out of about 1,200 tons that had been destined for recycling to the landfill.

Wheatley said the added cost of contamination is another challenge on top of low commodity prices for recycled materials. Recycling companies are struggling to turn a profit or break even with the current market.

Residents who wish to recycle are urged to recycle only what is listed on their recycling bin as recyclable materials.

That includes paper, plastic, glass and metal. But, Wheatley said, metals should be limited to empty containers like those listed on the recycling bins or the Regional Recycling website, regionalrecycling.org.

Lawnmowers, guns, chain saws and engine blocks -- which contain metal -- are not recyclable because of oil and because of the limitations of the machinery at the recycling facility.

"If that engine block had made it into our sort line, it would have torn up millions of dollars of equipment," Wheatley said.

People are asked to not put their recyclables in trash bags because the bags will be thrown out. Often, those bags are full of trash and aren't worth opening at the recycling facility, officials have said.

"We opened a few bags that we wish we hadn't opened," Wheatley told the Regional Recycling and Waste Reduction District's board Thursday morning.

Recyclable materials are dumped in the recycling warehouse, then placed on conveyor belts for sorting before ultimately being recycled.

Workers can sort out much of the garbage thrown in, such as furniture and food waste, but not everything. Propane tanks that make it past the sorters have caused fires at the facility because of the flammable material that remains on the inside of the tanks.

Waste Management announced in February that it will no longer allow people to drop off their recycling at the company's Recycle America site within the Little Rock Port Authority at 7900 Sloane Drive on Little Rock's east side because of contamination within those drop-off loads.