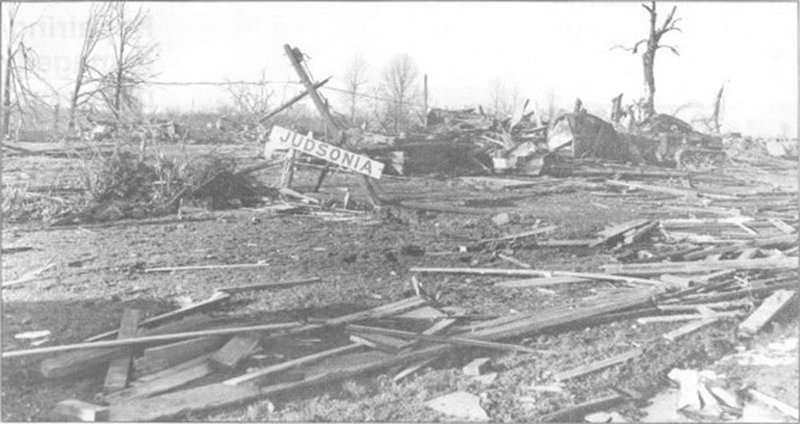 This photograph from the White County Historical Society shows the aftermath of the tornado that ravaged the town of Judsonia on March 21, 1952.

March 21, 1952, had all the makings of a routine Friday in Judsonia, Arkansas. As the town’s residents would soon learn, though, Mother Nature had other plans. The sky was preparing to unleash a fury that would forever link the words “tornado” and “Judsonia” in the annals of White County history.

Students at Judsonia School District had watched the clock throughout the day, albeit for different reasons. The juniors and seniors were anxious to get home and prepare for their annual banquet, which was to be held that evening. The younger students had no doubt been keeping an eye on the sky in hopes that the baseball game between the sixth-grade boys and Morris School wouldn’t be interrupted by rain, They needn’t have worried, as the game went off without a hitch, and 12-year-old Edward Chapman pitched his team to victory.

Downtown, shopkeepers were preparing to close their doors on that gray, dreary Friday afternoon and head home for the weekend. Among them was Mrs. DuLaney, who was getting ready to lock the doors of DuLaney’s Variety Store and join her husband and daughter in the family car.

A photograph of a clock that stopped at 5:34 in a local business captured the time when the lights went out and Judsonia residents realized the roar they were hearing was no train. The storm rapidly descended on the town with a destructive force that would leave 44 dead, dozens injured and Judsonia’s downtown reduced to a pile of rubble, according to That’s Judsonia by W.E. Orr.

Eddie Wood was 10 years old when the tornado struck, but he said he remembers “everything about that day.”

“I had been to the baseball game at the school, and after the game, I went to my grandfather’s store. My mom called and said there was a bad cloud coming up, and I needed to get home,” he said. “I was sitting at the table reading a Superman comic book, and the lights went out. We started hearing a loud roaring. We thought it was a train at first, but then realized it wasn’t. I looked out and saw a black cloud that looked like it was rolling on the ground. My mother screamed and grabbed my sister and me.”

Wood said his sister remembered the stove was still on in the kitchen and went back to turn it off.

“When she started back across to the living room, the kitchen started going away,” he said. “My dad pulled up in a truck, and the tornado blew him down the road and back again. He ended up back where he had started, but facing the other direction.”

After the storm passed, an eerie silence enveloped the town, Wood said.

“It was deadly quiet, not a bird singing or a dog barking,” he recalled. “Then there was an ear-piercing scream. It was a lady who had lost her daughter.”

Among the dead was Edward Chapman, a schoolmate of Wood’s who had pitched the Judsonia boys’ sixth grade team to their big win just hours before. High school student Ray Parish, who had been on his way to the junior-senior banquet when he pulled his car over to wait out a downpour, was killed when a building fell, crushing his car.

Wood said he knew several victims of the storm,

including Mrs. DuLaney, whom his mother had worked for at DuLaney’s Variety Store. Dulaney was killed when the store collapsed just moments after she had waved to her husband and daughter from the shop window.

Bobby McAdams was 12 years old when the tornado struck. He remembers walking with a friend through the debris after the storm.

“Most everybody was just amazed that something like that could happen. They were pulling people out of buildings till late that night. Main Street was pretty much gone. It was a different world back then. It would take a long time for businesses to recover. Not much of the town was left,” McAdams said.

“There are some days in a person’s life that they never forget,” said Morris Toney, who was 14 years old at the time of the tornado. “A friend had come with me on my paper route for the Gazette, and we had planned on going to the movies that night. School was out, and everything was good. My mother had been standing at the door, and just when she walked away, the door flew off and hit the refrigerator. The storm was on us, and we got under the table. It lifted our house off the ground, and I could feel water, like we were floating. The house hit a rock cellar and came back down. We all survived.

“We lived on the edge of town, and I started walking. It never entered my mind that people had been hurt until I saw my friend who had pitched the baseball game being brought out of his house. He had

Victims of the tornado who filled hospitals in Searcy after the tornado had passed hailed not only from Judsonia, but Bald Knob, Kensett, Doniphan and Georgetown, as well. Judsonia’s Methodist Church had withstood the storm and quickly became a refuge for survivors.

Judsonia resident and local historian the late W.E. Orr recalled in his book That’s Judsonia how in the cold, bleak days that followed the tornado, residents sifted through the debris that had once been their homes and businesses.

“Our house lay in ruins,” Mrs. Earl Bunch told a reporter, “but the possessions I really grieve for are the pictures of my children when they were babies, the locks of hair, the letters. All these blew away with the wind, and they can never be replaced.”

On March 24, 1952, a funeral was held in the Evergreen Cemetery for 11 of the 44 victims. The Rev. R.J. McMillan, former pastor of Judsonia’s First Baptist Church, preached the service. After a choir sang “Rock of Ages” under the trees in the cemetery where three tents had been raised, McMillan is said to have begun by telling the mourners, “The mind of man cannot find the words to speak at an hour like this. Words fail me — I can only say to you today that God knows, God understands.”

Wood was present in the cemetery on that cold morning. He, Toney and McAdams still live in Judsonia. McAdams runs the local barber shop, while Toney and Wood have retired.

“My dad was a foreman at Royal Crowne Bottling Plant, and it was destroyed in the tornado,” Wood said. “He was offered a job in Batesville, and I pitched a fit because I didn’t want to leave my friends, and we stayed in Judsonia. There were 18 in my graduating class, and I still know all of them. I call them, and we know each other’s birthdays. They are more than classmates. They are like family, and I wouldn’t have had that somewhere else.”

Wood graduated from Judsonia High School and taught math there from 1966 to 1971, when he became principal of the school. He was promoted to superintendent in 1982 and later served as superintendent of the Riverview School District when Judsonia joined with the Kensett and Griffithville districts.

The list of those who experienced that terrible night may be dwindling with the passing years, but the memories of those who survived haven’t faded.

“Everybody has their own story about that day, and it is still a topic when we get together to drink coffee this time of year,” Toney said. "Those few minutes of chaos that changed the White County town forever are preserved in a chapter of Orr’s book called “That Terrible Twilight.” In it, Lin Wright, who wrote about the storm for the then Arkansas Gazette, summed it up best when he said, “One thing can be said with certainty about last night in this area — it was hell.”