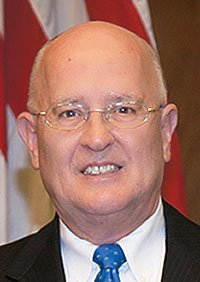 FAYETTEVILLE -- City Councilman John La Tour said Sunday he wouldn't resign after an incident at a restaurant sparked calls for him to step down.

La Tour, who represents Ward 4 on the city's western side, said Friday morning he asked an employee at Arsaga's at the Depot on Dickson Street what her gender was because "we live under an ordinance which lets me choose my gender based on how I feel that day."

La Tour was referring to the Uniform Civil Rights Protection ordinance that protects gay, bisexual and transgender people from discrimination by nonreligious businesses and public accommodations. La Tour has long been a vocal opponent of the voter-approved ordinance. He was elected in 2014 with 43 percent of the votes among six candidates.

"They know I'm conservative; they're terribly disappointed I'm on the City Council," La Tour said of those calling for him to step down. "All that this is about is to discredit John La Tour and make him look like a buffoon."

A widely shared Facebook post by Fayetteville resident Gavin Smith said La Tour told the employee he was a man and could prove his gender by exposing himself, which Smith called "bullying behavior and unacceptable on so many levels."

La Tour said Sunday his exact words to the employee were, "I am a man and I can prove it."

"They just took it exactly the wrong way," La Tour said, adding he "will never resign."

Gavin Smith didn't respond to a Facebook message asking for comment. The employee was not identified in the post. No police reports on the incident had been filed by Sunday afternoon, said Sgt. Craig Stout.

"We have a certain standard of respect that we expect them to show to their constituents and anyone working here in our city," said Kyle Smith, a Ward 4 resident and spokesman for For Fayetteville, a group that supported the nondiscrimination ordinance and started the petition. "When he (La Tour) starts outwardly acting like this, it's hard to justify how he's good for Fayetteville in any shape or form."

Cary Arsaga, the restaurant's owner and co-founder, said Sunday morning he and La Tour have a history of "spirited" but generally friendly debate. Arsaga wasn't present for the incident and said he wanted to withhold judgment until talking with La Tour. The employee, who he did not identify, involved was "mortified" by all of the attention and didn't start the online backlash, Arsaga said.

La Tour said the incident began during his regular Friday morning stop at Arsaga's to meet a group of acquaintances. The music was overly loud despite his request to lower the volume, so he responded by dancing along with it, he said. He intended to ask the employee to dance with him but wanted to confirm she was a woman first, La Tour said, citing the ordinance.

"You can declare you're a man or you're a woman, whatever you want to," La Tour said. "I'm not going to ask a man to dance with me."

He went back to his table, where a manager came and asked him to leave, La Tour said. A post on his political Facebook page said residents should never go to Arsaga's again, but the post was deleted by Sunday afternoon.

La Tour often speaks of his religious opposition to homosexuality and transgender identity. He drew rebukes from other city officials during a council agenda session last month after asking whether a potential city contractor was a man or a woman and saying, "It's hard to tell these days." City Attorney Kit Williams said the question wasn't appropriate.

"They're not funny if they're intended as jokes, and they're just unbecoming for an elected official," Kyle Smith said of such statements.

Arkansas allows petitions to recall municipal elected officials from office. For Fayetteville hasn't begun that option, but "the cry has grown," he said.