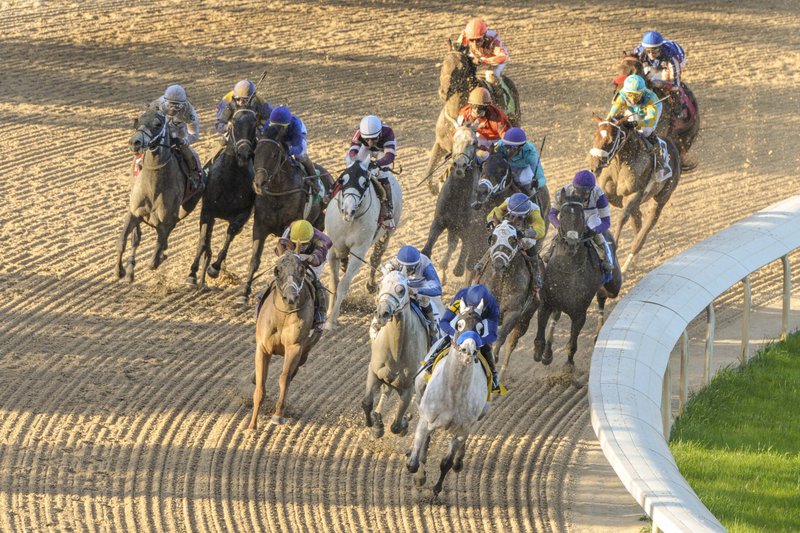 Cupid and jockey Martin Garcia, front center, leads the rest of the field onto the stretch of the Rebel Stakes horse race at Oaklawn Park in Hot Springs, Ark., Saturday, March 19, 2016. Cupid was the eventual winner of the race.

There was a lot to love about Cupid's performance Saturday afternoon in Oaklawn's Park Grade II $900,000 Rebel Stakes.

The gray son of Tapit stepped into stakes competition for the first time in Hot Springs and put on quite a show, holding off Whitmore to win the race at 1 1/16th miles by 1¼ lengths.

It's what happened at the start and the finish the really caught the eye of racing fans.

Cupid broke sluggishly in the field of 14, moved to the inside and darted to the lead during a 22.97-second opening quarter. He maintained a clear lead under Martin Garcia and was up by about 2 lengths as he turned into the stretch.

Cupid lugged in and briefly brushed the rail at the top of the stretch, regained his footing and pulled away when Whitmore challenged inside the last 16th of a mile.

Just like that, Triple Crown-winning trainer Bob Baffert is back in Kentucky Derby contention a year after American Pharoah became the first horse in 37 years to sweep the Derby, Preakness and Belmont Stakes.

Baffert not only has Cupid, who checks in at No. 3 in the Associated Press' latest Run to the Roses Top 10 list -- behind undefeated leaders Nyquist and Mohaymen -- he also trains No. 5 Mor Spirit.

A year ago, American Pharoah splashed his way to a 6¼-length victory in the Rebel in his 3-year-old debut.

The racing conditions were much better Saturday in Hot Springs, and Cupid wasn't making his 3-year-old debut, but his victory was significant because he beat a big field and overcame trouble with ease.

Cupid, a son of Tapit, is ridden by Martin Garcia, a top jockey who wound up as American Pharaoh's workout rider while Victor Espinoza rode the horse to the Triple Crown.

As Baffert lurks, the Nyquist-Mohaymen showdown in the Florida Derby is less than two weeks away. Nyquist (6-0) is prepping well in California. He will be shipped to South Florida next week; Mohaymen (5-0), according to regular exercise rider Miguel Jaime, "feels great, like a Ferrari." The same was said by the connections of American Pharoah.

Cupid's hesitant start forced Garcia to use him to get the lead going into the first turn and he stayed in front the rest of the way, even after he swerved toward the rail when turning for home.

"He was able to overcome that," Baffert said from Santa Anita, where he watched the race. "He got right back on his feet and really showed his athleticism."

Cupid, who returned to his Southern California base Sunday, is tentatively scheduled to return to Oaklawn for the Arkansas Derby on April 16.

UP NEXT: DOUBLE POINTS

This weekend, the Louisiana Derby at Fair Grounds in New Orleans and the UAE Derby in Dubai are worth a total of 170 points each -- 100 for first, 40 for second, 20 for third and 10 for fourth.

Gun Runner, Greenpointcrusader and Mo Tom are among those set for the Louisiana Derby; Frank Conversation, trained by Doug O'Neill (Nyquist's trainer) is set for the UAE Derby.