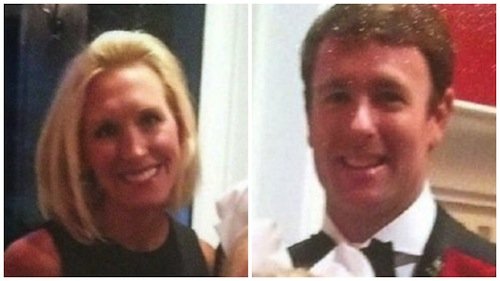 A couple formerly from Little Rock landed at the Brussels airport Tuesday morning just minutes before the first of two bombs exploded inside the building.

Hunter Carpenter and his wife, Megan, were on a plane pulling up to the gate when the pilot announced that there was a "security situation," Carpenter said Tuesday by cellphone. The passengers were not allowed to immediately leave the plane. So, Carpenter logged onto Twitter and learned the seriousness of their situation.

Belgium was hit with three bombings Tuesday -- two at the airport in the suburb of Zaventem (northeast of the capital), and one about an hour later in the Brussels subway system near the European Union headquarters. The Islamic State extremist group has claimed responsibility for the attacks.

When the Carpenters and fellow passengers were allowed to leave the plane, they stepped into a scene of chaos.

"We deplaned, and everybody was running around crazy," Carpenter said. "They had people everywhere with SWAT teams and all that. There was ambulance after ambulance coming out [to the airport]."

Carpenter, 38, and his wife, 37, had landed at the Brussels' airport to catch a connecting flight on their way the Democratic Republic of the Congo, where they have been working for three years to adopt 6-year-old twin girls.

"It's probably been the craziest day of our lives," Carpenter said Tuesday.

"The only thing I can compare it to is what I imagine New York was like on 9/11," he said.

On Monday night, the Carpenters flew out of Newark, N.J., and arrived Tuesday in Brussels about 7:40 a.m. Greenwich Mean Time. The first bomb at the airport went off about 8 a.m., one of the airport's busiest times when thousands of people were there, according to The Associated Press.

Carpenter said he and his wife were fortunate that their plane had been delayed by an hour.

"We would have claimed our bags, gone through customs and been right in the American Airlines area had our plane been on time," he said.

The bombings closed the airport, shutting down all flights in or out.

The Carpenters left the airport terminal with only what they could carry. Outside, traffic had been diverted from the building and taxis were hard to come by.

Finally, Megan spotted a cab, and they grabbed it. First it took them to the Maelbeek Metro Subway Station, where the third bombing had occurred by then.

"We get there, and there's police and total chaos there," Carpenter said. "There's guys in black hoodies and weapons," he said, describing security personnel.

The blast shut down the subway system.

So the Carpenters hired the cabdriver to drive them four hours to Paris. As it turned out, the driver was from Lubumbashi, the city in the Congo where the Carpenters were headed to adopt the twins, Ruth and Dorcas.

Carpenter, who is from Little Rock, is a partner at RedBird Capital Partners, a private-equity firm, and now lives in Dallas. Previously, he worked for The Stephens Group in Little Rock. He and Megan, who is from Clarksdale, Miss., met while attending college at the University of Mississippi, where Carpenter played basketball. They moved to Dallas almost a year ago.

Carpenter's parents, Warren and Judy Carpenter, were at the couple's home in Dallas watching their three children -- daughters Lawler, 10, and Brackett, 8, and son Wyllys, 6, when Warren received a text from his son about 5 a.m. Tuesday.

"I was in disbelief," Warren said.

He mentioned the long three years it has taken to get the twins' adoption to the point where they might be released to come to the United States. Their adoption is still not a done deal.

Warren said if the twins are allowed to come to the U.S. this trip, the bombings would make for a dramatic ending to that long process. Hunter and Megan Carpenter are expected back in Dallas on Tuesday at the earliest.

Of his son and daughter-in-law, Warren said: "Their motivation is love. They've got a chance to make two kids' lives quite possibly a lot better than they would have been."

"When these little girls grow up, then maybe they will fully understand," he said.

While the deaths in Brussels cast a pall over Europe, Warren Carpenter said he and his wife are thankful that their loved ones are safe.

"Hunter thinks he's somewhere between Tom Cruise and James Bond," Warren Carpenter said. "I brought him back down to earth ... with Forrest Gump."