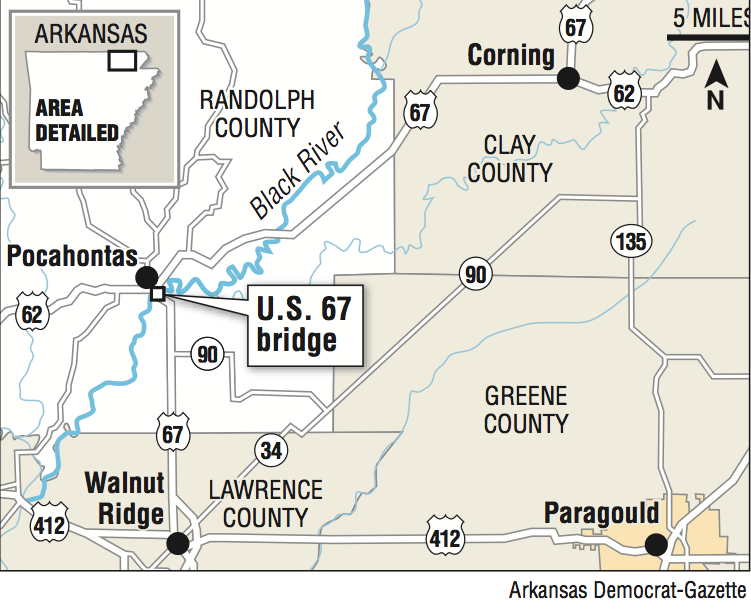 A map showing the location of the U.S. 67 bridge at Pocahontas.

The barn swallow, a common Arkansas bird with a forked tail and a propensity for building nests in man-made structures, will delay demolition of a bridge in Pocahontas if it chooses to lay its eggs in the span, highway officials said.

The two southbound lanes of the U.S. 67 Black River bridge in east Pocahontas are to be replaced this summer -- provided swallows don't raise their young under the trestles of the 82-year-old crossing. The Arkansas Highway and Transportation Department deemed the span -- Bridge No. 00483 -- as structurally deficient and announced in August 2013 that it needed to be replaced.

The bridge features a swivel pivot in the middle that worked until a new two-lane bridge was built beside it in 1986 for northbound traffic, the Highway Department reported.

Highway Department District Engineer Walter McMillan of Paragould said plans call for the bridge to be removed by June or July, but if barn swallows nest under the structure, workers have to wait for the eggs to hatch and young to fly away.

The birds, along with hundreds of other species, are protected under the federal Migratory Bird Treaty Act of 1918, said Josh Seagraves, a spokesman for the Highway Department's environmental division. The act was created to protect birds and their young that migrate yearly. It was enacted when many bird species were threatened by commercial trade in birds and bird feathers.

"Nesting birds are common in almost all bridges," Seagraves said. "We work with contractors. The law doesn't prohibit destruction of the nests as long as there are no eggs or young in them."

Along with the barn swallow, the cliff swallow and eastern phoebe are birds that frequently nest in man-made structures, he said.

In some cases, when bridges are up for demolition, workers place nets under the spans to keep nesting birds out, Seagraves said. Officials also install noisemakers that replicate the sounds of predators to scare birds away.

Danny Straessle, a Highway Department spokesman, said he was unaware of any demolition projects delayed too long in the past because of the nesting birds.

"There are windows of opportunity between when birds nest," he said. "We've installed netting and put up sounding devices to keep them away before."

The Highway Department let bids on the U.S. 67 Black River bridge project on Wednesday, McMillan said. It should take about six weeks to tear it down once work begins.

"It's all about timing," McMillan said.

Plans call for closing the southbound lanes and diverting traffic on two lanes in the northbound bridge. About 25,000 cars cross the bridge daily, McMillan said.

It'll be the second Black River bridge taken down within the past 30 years.

In 1986, a demolition crew took down a steel railroad bridge built in 1917 about 300 yards upstream from the U.S. 67 span. It took several days to topple that bridge and people turned the project into a social event, sitting on lawn chairs along the riverbank to watch the bridge's demise.

McMillan doesn't expect it will take as long to take down the U.S. 67 bridge.

"We'll dynamite it and haul off the scrap," he said.

It will take longer to build the new bridge.

"These birds could slow the project down," he said. "It could delay the start on it. It'll take two years to build the new bridge.

"We can't build a new bridge, though, until the old bridge is down."