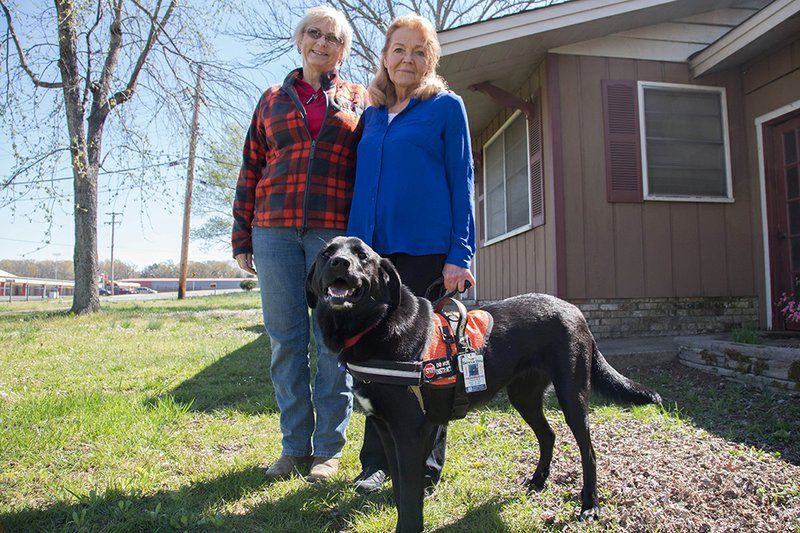 Frances Kirk loves her Labrador-mix Domino. Kirk hardly ever leaves the house without the dog, and she said Domino gave her back her life after she spent years struggling with post-traumatic stress disorder after serving in the Army.

“I’m a walking example of what can happen if you don’t get treatment for PTSD,” Kirk said. “It was almost 40 years before I finally did.”

Even though she worked in mental health while in the Army in the Vietnam era, Kirk said, there was very little information about working through PTSD. After leaving the service, she used to go weeks at a time without stepping foot outside her house. She said she became more and more isolated, refusing even to go to church unless one of her children was with her.

“When the children were grown, it was just easier to stay at home,” she said. “Home is a safe place.”

It was a long time before Kirk was diagnosed with PTSD, and she started going to therapy a few years ago. About a year into therapy, Kirk heard about how service dogs could help veterans with PTSD. That’s when Domino came into her life.

“I trained her with [A Veteran’s Best Friend’s] support, because I didn’t know how to train a service dog,” Kirk said. “I now go to church. I’m able to go out on my own. I go to the grocery store by myself. What she has allowed me to do is lead a more normal life.”

When someone has PTSD, Kirk explained, they are often hyper-vigilant about their surroundings. She said, for example, that when she goes to a restaurant, she often prefers to sit in a corner facing the door so she can see everyone around her.

Domino can sense when Kirk is feeling uncomfortable if someone invades Kirk’s personal space, and the dog will place her body between Kirk and the other person. Domino can also sense when Kirk is about to have a panic attack and works to divert her attention to help her

“If I’m starting to ramp up, and I’m about to have an anxiety attack or a panic attack, she will insist that I focus on her,” Kirk said of Domino. “She gets between my legs or paws my leg, but she brings me back to the here and now. When you’re in the middle of a panic attack, you’re not really there. So she forces me to pet her or pay attention to her to focus on what’s going on right now.”

Kathie Ball, interim director of A Veteran’s Best Friend, said the dogs can sense the adrenalin rising in someone with PTSD, and they combat that chemical change by making the person have positive feelings.

“When the panic attack begins, adrenalin starts pumping,” Ball said. “When your dog brings you back, and you start petting your dog, it’s a God thing that your endorphins start pumping and the adrenalin goes away. The good things come up, and the bad things go away, and that’s chemically

Ball said her involvement in A Veteran’s Best Friend was an answer to prayer. She started teaching obedience classes for dogs in September 2008, and two years later, she was asked to visit a man’s house for a private lesson. She said she knew something was different about that situation, and she soon learned he wanted a service dog, not just an obedient dog.

“I knew nothing about training a service dog,” she said. Ball started researching and talking to friends who were trainers. She found two women who could help her train this dog to be a service dog, but they learned the dog had hip dysplasia and would not be able to serve her master in that way.

Eventually, Ball met Greg Sporer, who was a therapist working with veterans. In August 2012, Sporer asked Ball if she would want to serve on a mission trip with him, and when she agreed, he told her it was in the city of Cabot.

“He said, ‘We are going to train service dogs for veterans with PTSD,’” she said. “When he said that, the hair on the back of my neck stood up. I had been praying for two years that God would show me what he wanted me to do. There it was.”

A Veteran’s Best Friend was meeting at Fellowship Baptist Church in Cabot until the need became too great to handle in the borrowed space. Now the ministry’s office is in a house at 68 S. Pine St.

The ministry has several needs, Ball said. First on the list is financial support. The ministry has the money to pay its rent for the office through September, but beyond that, the organization will need funds to keep the lights on. It is also expensive to train and care for the dogs, and currently all of the trainers are volunteers.

“Because of the volunteers that we have, we’ve got it down to about $7,000 to train a dog, but we need to pay our folks,” she said. “We may end up losing a really good trainer unless we can pay him.”

Additionally, A Veteran’s Best Friend is in need of a new director. Ball said the new director does not need to know about training dogs, but needs to be able to run a Christian ministry.

“We are looking for someone who will take us to the next level,” she said. “We need someone who has the knowledge to run a Christian business. I’m the interim director, but I train dogs. That’s what I know how to do.”