At session, no skirting managed care 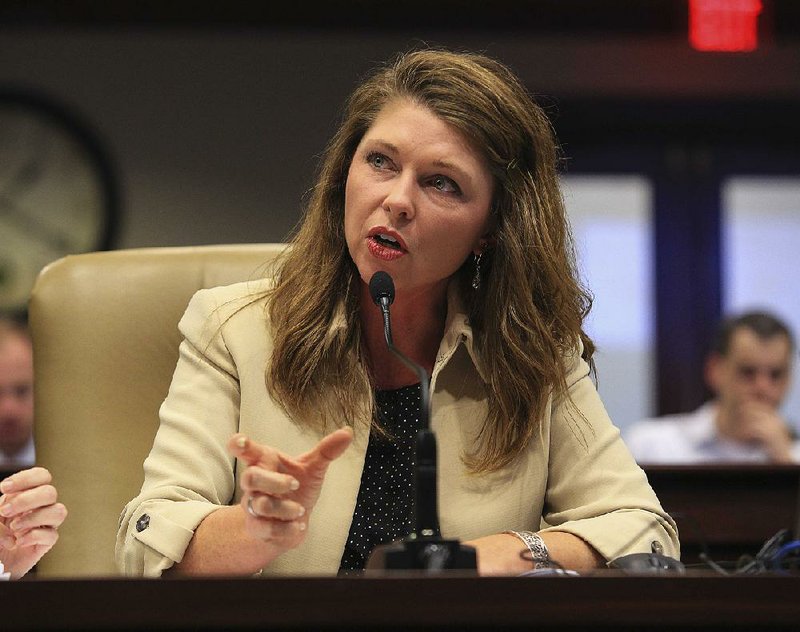 Rep. Michelle Gray, R-Melbourne, is shown in this file photo.

The governor's agenda for the special session that begins April 6 will include a bill calling on the state to hire managed-care companies to provide care for the developmentally disabled and the mentally ill, as well as a bill to make changes in the state's expanded Medicaid program through an initiative called Arkansas Works.

Hutchinson spokesman J.R. Davis said the governor has no plans to offer for consideration a plan supported by some legislators aimed at curbing the growth in state Medicaid spending without hiring managed-care companies.

Hutchinson believes that the managed-care plan is "the best plan to achieve the savings we're looking to achieve," Davis said.

To the contrary, state Rep. Michelle Gray, R-Melbourne, a managed-care opponent, said Hutchinson should include proposals by proponents and opponents of managed care on the special session agenda.

"I'm disappointed that he's not going to let the Legislature decide policy," she said.

Under Article 6 of the state constitution, legislators can consider only the matters included in the governor's proclamation announcing the special session.

However, by a two-thirds vote of both chambers, they can remain in session for up to 15 days after taking action on the matters in the proclamation.

The issue of what will be included on the agenda arose Tuesday during a meeting of the Health Reform Legislative Task Force, which was formed last year at Hutchinson's request to explore changes to the state's Medicaid program.

At a meeting earlier this month, the task force -- composed of eight House members and eight senators -- voted in favor of continuing health coverage for more than 267,000 low-income Arkansans under the state's expanded Medicaid program.

The group also recommended that the Legislature consider changes proposed by Hutchinson that he said would encourage enrollees to stay employed and take responsibility for their health care.

But the panel split on whether the state should turn to managed-care companies to provide benefits to the disabled and the mentally ill.

Under Hutchinson's proposal, the state would pay managed-care companies a fixed amount per recipient to provide benefits to the developmentally disabled and the mentally ill.

Under a plan they called Diamond Care, Gray and other managed-care opponents proposed hiring a company to coordinate patient care for those two groups while the state would continue to pay the providers directly.

According to The Stephen Group, a Manchester, N.H.-based consulting firm hired by the task force, Hutchinson's plan would reduce the growth of Medicaid spending by $1.4 billion over five years, while the alternate plan would save $1 billion.

Hutchinson had said he wanted the state to curb the growth of spending in the traditional Medicaid program by about $835 million over five years, in part to pay the state's share of the cost of the expanded Medicaid program.

Proponents of managed care cite the potential for greater savings for the state budget, while opponents fear the companies will cut provider payments and limit benefits.

Gray said she proposed a "compromise" in which the state would hire managed-care companies for the central part of the state, while adopting the Diamond Care approach for the northern and southern parts of the state.

Hutchinson rejected that approach, she said.

Davis said he wasn't familiar with Hutchinson's discussions with Gray.

He said the governor's plan is "the best direction for Arkansas."

"We've seen it in other states," Davis said. "We know what we're going to get, and it's going to be real savings for the state of Arkansas."

The task force is set to review draft legislation that would implement the Diamond Care plan a day before the special session starts.

Task force member Sen. Keith Ingram, D-West Memphis, said Hutchinson is making a "terrible mistake with the Legislature" by not including the Diamond Care plan on the special session agenda.

"If he is going to put us all through this, and have his mind made up that it's going to be managed care, then this is an exercise in total futility," Ingram said.

The firm estimated that approach would save $2.4 billion over five years.

Sen. Linda Chesterfield, D-Little Rock, said legislators should "raise our voices to say we think it would be in the best interest of the special session, in order for us to get to common ground, to hear all sides."

But she noted, "There's nothing any of us can do to make the governor do anything."