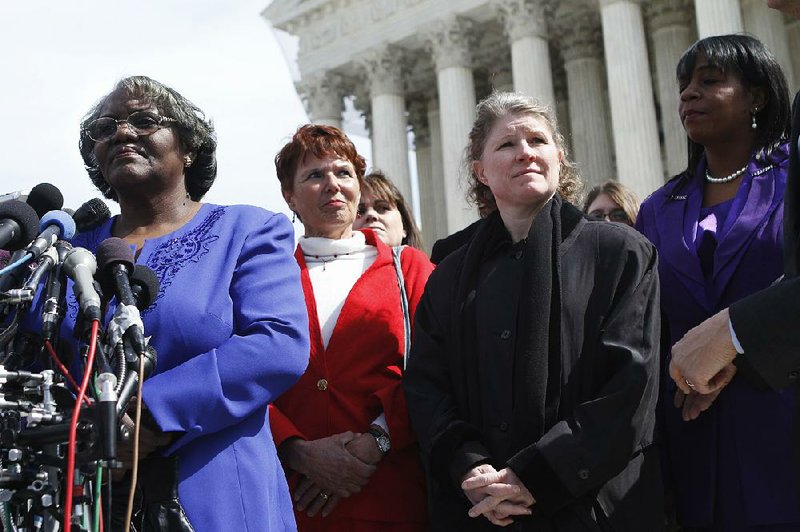 Betty Dukes (left), with other plaintiffs in a lawsuit alleging Wal-Mart discriminated against female employees, speaks at a March 2011 news conference in Washington. Dukes addressed the National Press Club on Tuesday — a fifth anniversary for Walmart Stores, Inc. v. Dukes.

WASHINGTON -- A Wal-Mart employee who fought the company all the way to the U.S. Supreme Court has left the company after reaching a settlement, but she said Tuesday that she'll be devoting her energy to fighting racial and gender inequality.

Tuesday was the fifth anniversary of the oral arguments in Walmart Stores, Inc. v. Dukes .

At the National Press Club, Betty Dukes, the lead plaintiff in the case, described what it had been like to watch as the justices grappled with her case.

"It was an awesome place to be and it was absolutely a place of terror to be in such a high place of law in the land and you don't know the end result," she said.

Dukes and five other women sued the Bentonville retailer in 2001, alleging that it discriminated against the women it employs. Their attorneys sought to make the suit a class action on behalf of roughly 1.5 million current and former female Wal-Mart employees.

But the U.S. Supreme Court, in a 5-4 decision, said the case didn't qualify for class-action status, ruling that the plaintiffs had presented "no convincing proof of a companywide discriminatory pay and promotion policy." Additionally, the plaintiffs had failed to establish that there was sufficient "commonality" -- "common questions of law or fact" that all the women shared.

Even if men, on average, made more money and were more likely to be promoted, the plaintiffs couldn't show that all of those female Wal-Mart employees had been injured, the court said in June 2011.

In December, 14 years after first filing suit, Dukes left her job at the Wal-Mart in Pittsburg, Calif., 40 miles northeast of San Francisco.

At the National Press Club in Washington on Tuesday, Dukes, 66, criticized the court's decision.

Class-action status is a crucial tool, she said, because "individually, we don't have the resources to stand up against corporate America."

She said the high court ruling made it a lot harder for plaintiffs who have been harmed to band together, she said.

She detailed her plans for the Betty Dukes Foundation, a new organization that "seeks to empower ordinary workers in the labor force, and to help them to fight against discrimination and oppression in different forms."

She also called for Aug. 18 to be "National No Shop Day," 24 hours set aside to recognize the 1.5 million female current and former Wal-Mart employees.

"They won't give it to us until we demand it. Until we say enough's enough," she told the crowd.

If women band together, Dukes said they would overcome barriers, adding, "Three in a chain is strong, but 100 is unstoppable."

One of the people who spoke at Tuesday's event, Maya Raghu of the National Women's Law Center, praised Dukes and her co-workers for taking on "one of the biggest companies in the world."

"I just wanted to say thank you Betty to you and your co-plaintiffs for your courage and determination, for standing up for yourself and women all over this country," she said.

After speaking, Dukes posed for pictures with admirers and enjoyed a belated birthday cake; she turned 66 on March 17.

Despite the litigation, she said she remains a Wal-Mart customer.

"Of course. Where else am I going to shop at?" she said. "This was a legal issue."

A Wal-Mart official confirmed that Dukes and the nation's largest private employer have parted ways.

"There was a settlement. The terms of the settlement are confidential. We're pleased with the resolution and we can confirm that Ms. Dukes retired from Wal-Mart," said spokesman Randy Hargrove.

"We've had a strong policy against discrimination in place for many years and we do not tolerate discrimination. We continue to be a great place for women to work and advance and hundreds of thousands of women have had positive experiences that don't match the claims ... of the plaintiffs," he said.

Dukes, who joined Wal-Mart in 1994, started as a cashier and eventually became a customer-service manager, but eventually was demoted to a greeter position.

She alleged racial and sexual discrimination, helping to start what would have been the largest class-action sex discrimination lawsuit in U.S. history.

Despite the years of litigation, Dukes said she's fond of the place that employed her for "21 years, seven months and six days."

"I enjoyed my work and I enjoyed my work atmosphere. I truly enjoyed my associates that I worked with. I have some fondness for many of the managers in my community where I've been over 50-something years. I was able to see people on a regular basis in my store, shoppers that I wouldn't see on a normal daily course and it was always good to see them," she said. "I've lost all that. I've lost that connection and I miss it to a great degree. "