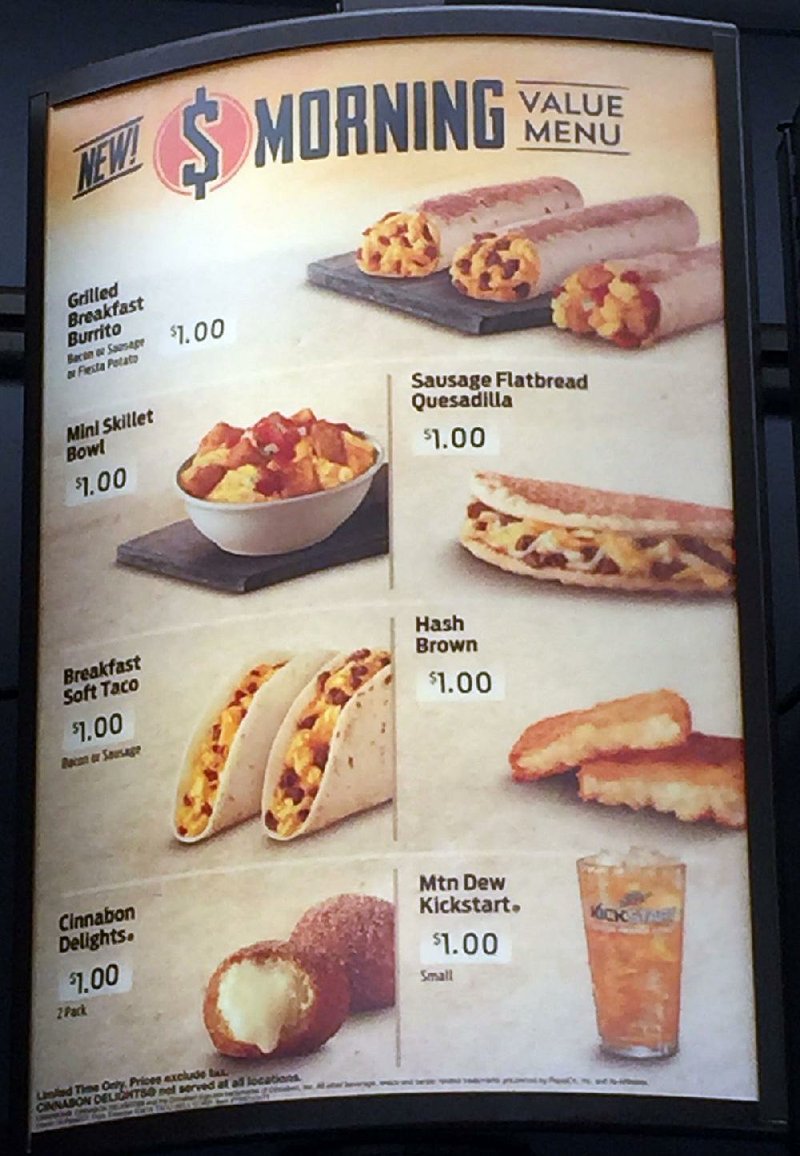 It made me wonder, how well does the home of Fourth Meal do First Meal? And how exactly does Taco Bell taste during daylight hours and while one is sober?

Hours: Might vary by location, but typically offered 7-11 a.m. daily

But with 10 menu items, I couldn't do it alone. I enlisted the appetites and courage of my colleagues.

I'd make one trip and buy two of each of the items. But it didn't work out exactly as planned. I noticed en route from Taco Bell No. 1 that instead of Cinnabon Delights, an employee gave me two orders of Cinnamon Twists (also $1, but not on the morning menu). This required a second trip to another Taco Bell. And I didn't have enough hands to manage all that and two of the $1 Mountain Dew Kickstart Orange Citrus beverages, so I'd order only one of those.

I'd also get to drink that myself, as no other co-worker dared to sample. I could only manage about two sips of the syrupy Tang-colored fizzy energy drink so I can't say if it is capable of giving one, as TacoBell.com claims, "the energy to fight through the fatigue and punch morning right in its little 8 a.m. smack-talking mouth."

I also tried one of three Grilled Breakfast Burritos varieties -- the bacon. It was a tortilla bundle of egg, nacho cheese sauce and chewy, salty bacon, but mostly of tortilla. There was much more bread than filling. Still, I've had worse for a buck.

The co-worker who tried the Fiesta Potato Burrito, filled with potato, pico de gallo, scrambled eggs and nacho cheese sauce, reported it was "a tasty vegetarian choice, if a little skimpy on filling. I wouldn't exactly call it a fiesta: whole lotta tortilla, little to celebrate. But hey, it's inexpensive and quick. What else could you want, right?"

The co-worker who tried the sausage version, said, "The folks at Taco Bell want adults to swap their kiddie cereals for their grown-up grilled breakfast burrito. Overall, the fillings were skimpy, but the grilling did add depth of flavor to the eggs, sausage and nacho cheese sauce, which was a little spicy. It's worth $1."

Soft tacos are another option, available in two varieties.

"Flavorful sausage, fluffy scrambled eggs, something with an odd aftertaste (the cheddar cheese?) in a gustatorily invisible flour tortilla made a tasty, one-handed midmorning snack," reported a colleague about the Sausage Soft Taco.

The other soft taco sampler said, "I had the Bacon Soft Taco. It's hard to mess up bacon and eggs, and Taco Bell succeeds in not messing it up, if that counts as success. Good enough to be passable, but not good enough to pass up other breakfast providers."

Another skewered the Skillet: "Ever been three hours late to a hotel breakfast buffet and eaten the last of the soggy home fries and sad scrambled eggs that not even nacho cheese can redeem? Well, you know what it's like to eat the Taco Bell Mini Skillet Bowl."

Two testers were thumbs down on the $1 Hash Browns. "Dried out and flavorless," reported one, while the other concurred, "Standard food service fare, deep fried and in need of ketchup."

One co-worker thought he loved the Cinnabon Delights, only -- oops -- he didn't have those. He snagged one of the extra bags of Cinnamon Twists: "It's a good thing Taco Bell isn't on my route to work. Otherwise, I would eat the [Cinnamon Twists] -- crispy, puffed corn twists, sprinkled with cinnamon and sugar -- on the way there and the way home."

The co-worker who did try the Cinnabon Delights deemed them delicious, adding, "They haven't reinvented the wheel here, but taking icing-filled balls of fried dough and rolling them in sugar is a simple yet clever idea." I agreed with her assessment. I was disappointed only that there were two tiny balls in the $1 bag. More Delights would have been all the more delightful.

Two co-workers said the Sausage Flatbread fell flat. Said one: "The main ingredients sandwiched in the middle -- egg, sausage and a light smattering of cheese -- were pretty bland, largely failing to stand out over the taste of the flatbread itself. I tried some with verde sauce, which gave it a bit of kick and some sorely needed taste, but I was left pretty much underwhelmed."

Said the other: "The sausage flatbread -- way too much flatbread and not enough egg and sausage. There was a tiny bit of cheese as well. Bland at best. I added Tabasco to give it a kick.