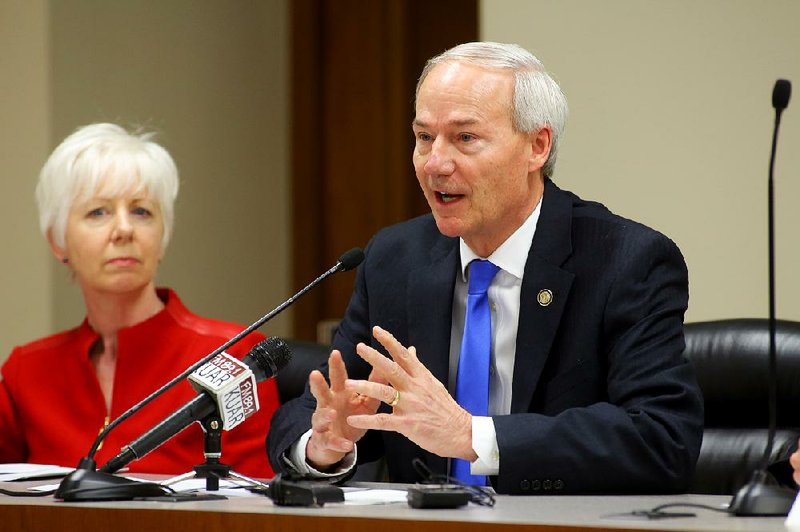 Gov. Asa Hutchinson, with Department of Human Services Director Cindy Gillespie, addresses his Medicaid advisory council Wednesday at the Capitol on his agenda for the Medicaid special session. ( Stephen B. Thornton)

A plan to hire managed-care companies to serve some Medicaid beneficiaries will allow the state to cut a list of developmentally disabled Arkansans waiting for home-based services in half within three years, Gov. Asa Hutchinson said Wednesday. 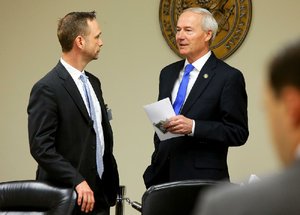 Photo by Stephen B. Thornton
State Surgeon General Greg Bledsoe talks with Gov. Asa Hutchinson before the start of Wednesday’s discussion of the governor’s plans for a special session on Medicaid.

Rep. Michelle Gray, R-Melbourne, countered that a plan crafted by opponents of managed care also would help serve the 2,600 people on the list.

Proponents of that plan, known as Diamond Care, will present their proposal during a special session of the Arkansas Legislature next week, even though Hutchinson has said their plan will not be on his agenda.

Under Article 6 of the state constitution, legislators during a special session can consider only the matters included in the governor's proclamation announcing the session. However, by a two-thirds vote of both chambers, they can remain in session for up to 15 days to consider other issues after taking action on the matters in the proclamation.

Gray said research by Diamond Care supporters indicates Hutchinson can define the issues that will be addressed in the session but can't limit the pieces of legislation that can be introduced to address those issues.

"If the subject is managed care, we're still going to fit in that," Gray said.

She said she expects Sen. Missy Irvin, R-Mountain View, to file the Diamond Care legislation, which will be aimed at curbing the growth of Medicaid spending without using managed-care companies except to provide dental benefits.

If other lawmakers object to the legislation being considered, it could be sent to the Senate rules committee for a decision, Gray said.

"We respectfully disagree" that other legislation can be considered during the session along with the governor's proposals, Hutchinson spokesman J.R. Davis said.

"The special session is the prerogative of the governor's," Davis said.

Under Hutchinson's proposal, the state would pay managed-care companies to provide benefits for the developmentally disabled and mentally ill.

The Diamond Care plan calls for the state to hire companies to help reduce the cost of caring for those populations while continuing to pay providers directly.

Hutchinson said his agenda for the session will include only two pieces of legislation: One that would implement the managed-care plan and one that would make changes to the state's expanded Medicaid program under an initiative called Arkansas Works.

Savings generated through managed care will help pay the state's share of the cost of the expanded Medicaid program, Hutchinson has said.

That share will start at 5 percent of the cost next year and reach a maximum of 10 percent in 2020. The federal government pays the remainder.

"This is the agenda that is really an urgent need of our state to address," Hutchinson said, noting that the federal waiver authorizing the private option, which provides coverage to most of those enrolled in the expanded Medicaid program, expires at the end of this year.

The expansion of the Medicaid program, which took effect in 2014, extended coverage to adults with incomes of up to 138 percent of the federal poverty level: $16,394 for an individual, for instance, or $33,534 for a family of four.

The Diamond Care plan, "would increase the responsibilities of the government, increase the risk to government, would not transfer the risk to a managed-care organization," Hutchinson told t̶h̶e̶ ̶4̶0̶-̶m̶e̶m̶b̶e̶r̶ ̶M̶e̶d̶i̶c̶a̶i̶d̶ ̶a̶d̶v̶i̶s̶o̶r̶y̶ ̶g̶r̶o̶u̶p̶ reporters after speaking to the 40-member Medicaid advisory group*, which is made up of health care industry representatives and consumer advocacy groups.

His plan would use money generated through the state's 2.5 percent premium tax, which would be levied on the managed care plans, to reduce the number of people with developmental disabilities on the waiting list for home-based services, such as help with daily living tasks.

The tax is expected to generate about $50 million annually, he said. His plan calls for at least half of that to go to serving people on the waiting list, he said.

Because the federal government provides 70 percent of the cost of benefits provided under traditional Medicaid, $25 million in state spending would be matched with about $58 million in federal funding.

Human Services Department officials have estimated that providing services to one person on the waiting list would cost about $50,000 annually, indicating that serving 1,300 people would cost about $65 million annually.

"What I'm presenting is a plan that has a funding mechanism that is uniquely funded by what we are offering in the Medicaid Reform Act," Hutchinson said, referring to legislation that would implement the managed-care proposal.

Gray said she supports Hutchinson's goal of reducing the waiting list, but is skeptical that managed care will generate the savings Hutchinson expects.

"What I fear is that he's going to need to use the premium tax to help cover some of those expenditures that he is not going to realize from savings from the managed-care plan," Gray said.

Gray said the Diamond Care plan would direct $10 million in annual savings to providing services to people on the waiting list.

Following a suggestion by The Stephen Group, a Manchester, N.H.-based consulting firm hired by a legislative task force on the Medicaid program, Diamond Care would serve everyone on the list but cap the services at $12,000 per person.

The Stephen Group has estimated that Hutchinson's plan would reduce the growth of Medicaid spending by $1.4 billion over five years, while the Diamond Care plan would save $1 billion over the same period.

Justin Nickels -- manager of the Arkansas Waiver Association, which advocates for community-based services for the developmentally disabled -- said his group supports the goal of reducing the waiting list, but worries about how managed-care companies will cut costs.

"We're concerned that, in a way to quickly get the waiting list ended, we might just start providing lackluster services," Nickels said.

"We look forward to continuing to discuss that legislation to see if we can find some common ground," Astin said.