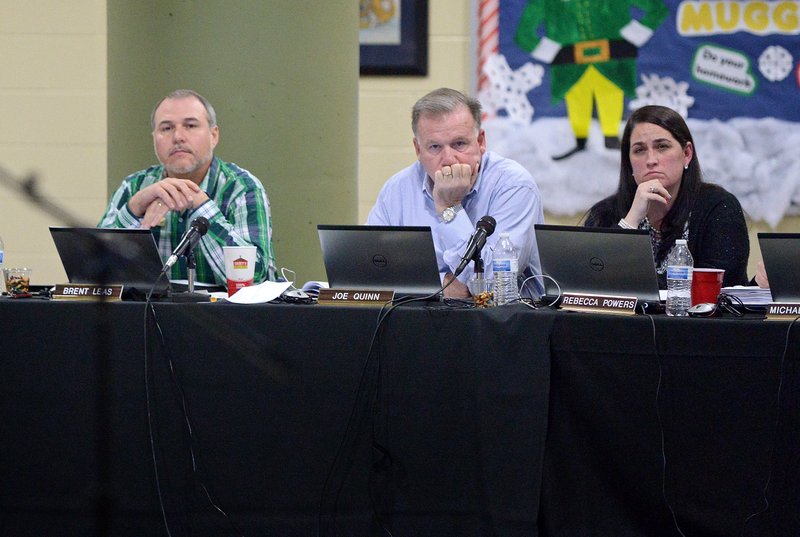 BENTONVILLE -- A School Board member asked fellow members to consider implementing a high school elective course focused on academic study of the Bible.

Brent Leas brought up the subject at the board's April 18 meeting. He distributed a letter he'd written explaining his position along with a copy of an Arkansas law, passed in 2013, that codified the right of school districts to offer an academic study of the Bible course.

"There's already five districts in the state that offer this," Leas said.

The board likely will discuss the issue during its pre-agenda meeting in June.

"I anticipate either myself or another board member would make a motion for the administration to add this as an elective course for the school year of 2017-18 so we can have it at Bentonville High School and Bentonville West High School," Leas said.

Leas' handout included quotes about the Bible attributed to former presidents Ronald Reagan and Theodore Roosevelt. Leas attributed to Roosevelt: "A thorough knowledge of the Bible is worth more than a college education."

A similar idea came up in Springdale in 2011. Jim Bradford, who served on the Springdale School Board at the time, proposed adding a Bible as literature course to the high school curriculum. The board tabled the idea, and it has not come up since, according to Rick Schaeffer, spokesman for the district.

Richard Katskee, legal director at Americans United for Separation of Church and State in Washington, said if he were on a school board, he would be very hesitant to support an academic course on the Bible.

"Learning about the Bible as a secular subject is incredibly valuable, but the chances of a school district doing it lawfully are very small, and the costs of doing it unlawfully are extremely high," he said.

Many teachers are not trained to present the Bible or to deal with students' questions appropriately, so they end up falling back on their religious beliefs, Katskee said.

"That would be like saying, 'Let's not teach math, because there are some teachers who don't understand math,'" Laursen said. "To eliminate a subject because you think a teacher might not do good is not having enough faith in our teachers and the administrators who oversee them."

Laursen said he believes the Bible ought to be taught in every high school. The concept has been tested in the courts and is perfectly legal, he said.

"There are all kinds of allusions in great literature to the Bible. Without a Bible background, you wouldn't understand a lot of those allusions," Laursen said. "Many artists have drawn pictures that allude to Bible characters. Biblical principles were used to develop our Constitution. The Bible is a great book that ought to be studied. As long as it's not taught devotionally, it has great value."

Katskee said numerous court cases have challenged Bible classes in public schools, and many decisions have blocked the classes.

"We get a lot of complaints by parents of students who are in classes where the Bible is being taught as an academic subject supposedly, but not actually," Katskee said.

The Arkansas law on the academic study of the Bible mandates course teachers be licensed in the state. It also requires schools not assign those teachers based on any religious test, religious orientation or affiliation, or criteria involving their beliefs about the Bible.

The Little Rock School District offers a semester-long elective course for grades 10 through 12 called "Bible as in Literature." The purposes of the course are to study the literary craftsmanship of Bible passages and to explore the relationship of a variety of other stories, poems and plays to the Bible, according to a course description in the district's curriculum catalog for next school year.

The Gravette School District has a long-standing practice of letting elementary school students sign out of school for 30 minutes to attend a faith-based education session off campus, said Superintendent Richard Page.

"It's not part of anything we're doing. It's not a school thing," Page said.