Kurrus: Open to role in district, but need to know where Little Rock schools headed 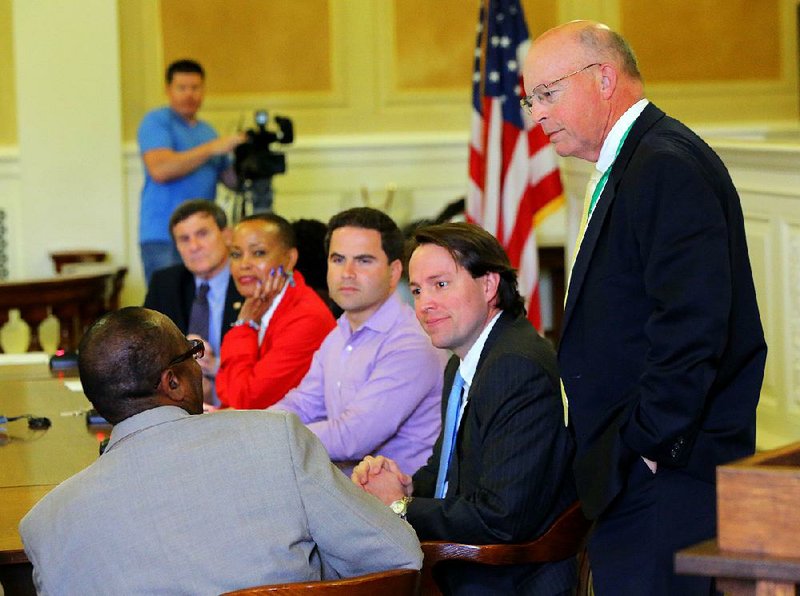 Baker Kurrus, who is being replaced as Little Rock School District superintendent when his contract expires June 30, said Monday that he would like to continue to work with the district in a nonpaying role -- but only if he can support the district's guiding policies.

"I am not willing to accept a role in anything unless I know where we are starting from and unless I have a clear indication of where we are headed," Kurrus said in response to a question about his future during a public forum hosted by Pulaski County legislators on the school district's leadership change.

About 150 teachers, parents, education organization leaders and displaced Little Rock School Board members attended the 4 p.m. event. City Director Kathy Webb, former Little Rock Superintendent Morris Holmes and Clay Fendley, an attorney who represented the district in a past legal battle over charter schools, were among the speakers.

Arkansas Education Commissioner Johnny Key announced last month that he is replacing Kurrus -- a Little Rock businessman and Harvard-educated attorney whom he appointed to the school district job last year -- with Bentonville School District Superintendent Michael Poore. Key made the superintendent change for the state-controlled district without prior notice to or advice from Little Rock community members, large numbers of whom have rallied to support Kurrus.

Key, who was invited but was unable to attend the Monday forum at the state Capitol, has said Poore, who will be paid $225,000 a year, is an educator with the experience necessary to raise student achievement in the district, which was put in state control in January 2015 because six of its 48 schools were state-labeled as academically distressed.

Sen. Joyce Elliott, D-Little Rock, told Kurrus that the most frequent question she is asked is whether he wishes to accept a role in the system.

Kurrus said that is a question that he continues to ask himself.

"I will say this ... I want to be part of the process to build, but I want to build from a strong foundation. What that means to me right now is I want to understand exactly how we got to where we are. Frankly, I don't quite understand that, but I hope to and I will. I have a wonderful working relationship with the commissioner. I've met Mr. Poore. He is certainly an easy guy for me to talk to."

Kurrus said he must know what the policies are that will guide or compel the district.

"We are going to talk," he continued. "I hope to get with the commissioner this week and maybe with Mr. Poore at the end of the week to really thoughtfully consider how we can build a strong school district, but there will have to be some indication about the policies and the direction before I sign up."

He then joked: "I really feel like Mr. Poore and I have both been invited to a shotgun wedding."

Sen. Linda Chesterfield, D-Little Rock, asked Kurrus whether he would be willing to continue in the superintendent's job should Key and Gov. Asa Hutchinson "walk this back."

"You can't unring the bell," Kurrus responded. "It's hard to work for people who don't want you to work for them."

Key notified Kurrus that his contract would not be renewed after Kurrus had argued to the Arkansas Board of Education against the nearly 3,000-seat expansion of the eSTEM and LISA charter school systems within the Little Rock district's boundaries. The independently run public charter schools have historically pulled more affluent, higher-achieving students from the Little Rock district, leaving the traditional school system with a greater percentage of high-need students and fewer resources to educate them.

Key has denied that Kurrus is being replaced because of his charter school stance.

Chesterfield told Kurrus that determining Poore's position on open-enrollment charter schools is "like working with jello."

Kurrus said they have only talked twice but that Poore is not the policymaker and will operate under the same constraints as Kurrus in that he will carry out policies and even influence policymaking, but ultimately the state education commissioner is the policymaker for the district, which operates without an elected school board.

"Ultimately, the community has to decide: Do we want a strong, vigorous, traditional school system with charter schools that have a limited purpose? Or do we think it is productive to have large charter systems that essentially act as alternative systems paid for by the state?"

Rep. Charles Armstrong, D-Little Rock, asked Kurrus whether his lack of experience as an educator was a weakness.

Kurrus responded that he never pretended to be an expert in curriculum and instruction and that he doesn't know how to arrange an elementary school library or teach first-graders how to read.

"But I know very, very good people who do," he said. "I tried in my role to set up a system where they were empowered and engaged, fully authorized, given clear, articulate goals and resources. Don't micromanage the people. Micromanage the process so the people are set up to succeed. That's what I did, and I don't think I was held back by the fact that I don't understand some of the things that experienced superintendents do understand.

"If I was in a smaller district where I didn't have the resources we have in Little Rock, it certainly would be a huge impediment. But I'm surrounded by world-class educators who sometimes weren't fully empowered to do everything they knew how to do. I didn't get in their way and I didn't pretend to tell them how to do their jobs, but I did help them get organized so they could focus on the things they knew how to do."

He said the district, with its $300 million budget, 4,000 employees and 60 schools and support sites, "is not a mom-and-pop organization. The one thing I felt good about was getting on top of that organization."

"What is the state's obligation to fund an alternative education system for students who are succeeding?" he asked, then referred to constitutional language that calls for an "efficient" public education system. "If you begin to segregate students in any circumstance ... we need to look very carefully at that no matter who does that and seriously consider whether that is in the community's best interest. That is the policy issue."

Austin Bailey, the parent of two elementary pupils, was among the dozen people who took up to three minutes each to express their views about the leadership changes. Bailey called Kurrus "a genuine advocate for our students" and said the district doesn't need "a savior from the north." She asked the lawmakers for help in keeping Kurrus on the job.

Jeff Grimmett is a teacher at Little Rock's Henderson Middle School, which is one of the schools labeled by the state as academically distressed because fewer than half of students scored at proficient levels on state exams over three years. He said those schools are improving despite a lack of help from the state, and he called on the governor and Key to release the district from state control.

Grimmett also asked that charter school expansions and the re-segregation of the city's schools be stopped, that the governor replace Key -- a chemical engineer -- with an experienced educator, and that the upcoming formation of a community advisory board for the Little Rock district be transparent to the public to re-establish a sense of trust.

Fendley, who represented the Little Rock district in federal court in an unsuccessful legal battle over charter schools, said greater school stability could be achieved in Little Rock if charter schools had to offer bus transportation to students, which they're not required to do now, and if restrictions were placed on charter schools prohibiting their angry or misbehaving students from leaving their schools in mid-year to return to traditional schools.

Tracey Ann Nelson, executive director of the Arkansas Education Association, told legislators that what happens in the Little Rock district, where there are no community-driven decisions, is a bellwether for the rest of the state. "We are concerned about the chilling effect on those who speak to power," she said.

Print Headline: Kurrus: Open to role in district; But need to know where LR schools headed, he says