Hutchinson says he will support Trump 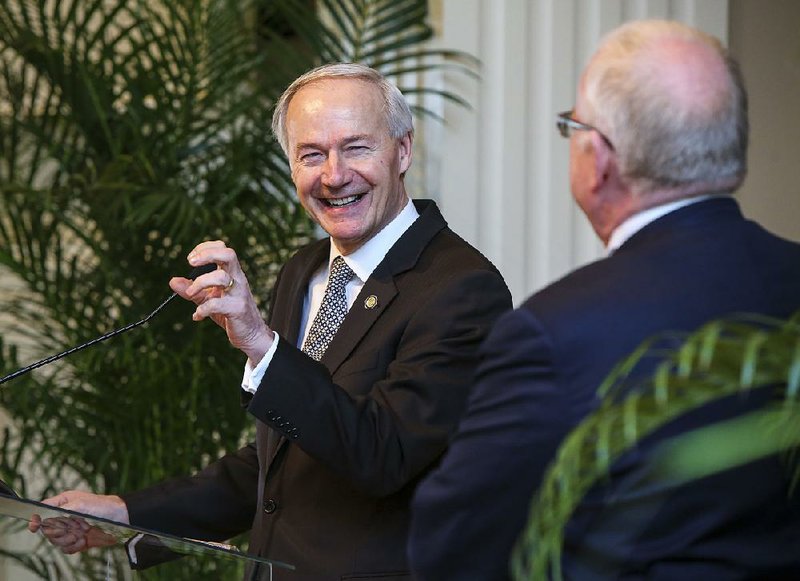 FILE — Gov. Asa Hutchinson takes a question from Rex Nelson (right) about whether he would actively campaign for Donald Trump if Trump wins the GOP presidential nomination in this March 3, 2016, photo. While not committing to that at the time, Hutchinson said Trump needs to shift “his demeanor” and comments to gain the support of “the establishment.”

In a statement, Hutchinson said while he does not always agree with Trump, he will support the Republican nominee for president.

The statement comes the same day Gov. John Kasich exited the Republican race and a day after Sen. Ted Cruz bowed out, leaving Trump the presumptive nominee for his party.

"I do not agree with everything Mr. Trump has said nor have I endorsed every policy he’s announced, but I do believe the Republican Party’s fiscally conservative approach to government and the values we stand for are far greater than what the other side has to offer the American people," Hutchinson said in the statement. "Those are the reasons why I will support the nominee of the party in November."

Hutchinson, who had endorsed Sen. Marco Rubio earlier in the race, had previously indicated he would support Trump if he became the nominee. In March, Hutchinson said Trump needed to "convince the mainstream Republicans [and] America that he is capable of presidential leadership."

Before that, Hutchinson had been critical of Trump, including calling his words "frightening" during a February interview on National Public Radio.