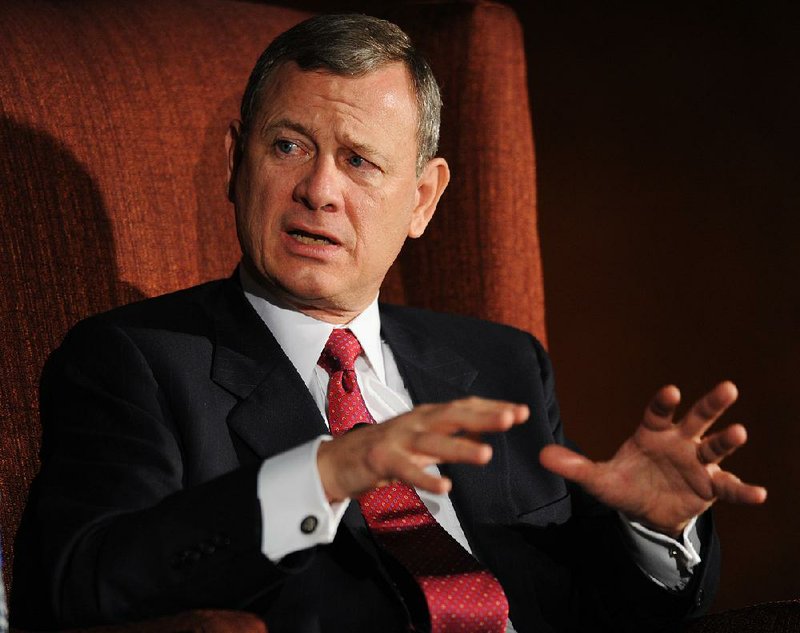 ROGERS -- Federal courts rewrote their rules to make it easier to bring civil cases to trial and will continue that effort, the chief justice of the United States said Wednesday.

Chief Justice John Roberts gave no specifics on the rule changes in his remarks to judges and other legal professionals in Rogers. The latest version of the Federal Rules of Civil Procedure, released in December, sharply limits evidence that can be requested in discovery motions, according to an April 5 summary by JD Supra, a research guide on legal issues.

The changes allow courts wider latitude to decide if requests for records are important, truly in dispute and accessible. The change is intended to restrict "fishing expedition" discovery motions and overuse of the practice, JD Supra says.

As chief justice, Roberts presides over the U.S. Judicial Conference, a panel of judges who write procedural rules for federal courts. He spoke Wednesday at the 8th Circuit Conference, a meeting of judges and practicing lawyers in the 8th U.S. Circuit Court of Appeals, which includes Arkansas. The conference meets every other year.

Civil trials are delayed because one side benefits from the delay or thinks it does, Roberts told an audience that filled the 670-seat room at the John Q. Hammons Center. Besides delaying justice, the practice is demoralizing to lawyers and their clients who have to wage a constant, burdensome effort to get to trial, he said.

Roberts visited privately with 10 students from the University of Arkansas School of Law after speaking to the group.

"He was a very down-to-earth guy in what was, for me, a once-in-a-lifetime experience," said Daveante Jones of Ashdown, one of the students invited. Roberts spent about a half-hour with the students, Jones estimated, answering any questions they had.

"I had a real conversation with him," Jones said. "It's been a great day."

Roberts did not give prepared remarks at the conference. Instead, he answered a series of question posed by William Jay Riley of Omaha, Neb., the chief judge of the 8th U.S. Circuit Court of Appeals in St. Louis.

Roberts spent much of the hour discussing how the death of Justice Antonin Scalia has affected the Supreme Court.

Scalia was "a dominant presence on the bench, in conference and privately," Roberts said. His legal arguments in conferences among the justices were always very well-reasoned and researched, he said.

President Barack Obama has nominated Merrick Garland, chief judge of the U.S. Court of Appeals for the District of Columbia, to replace Scalia. The Constitution allows the U.S. Senate to confirm appointees. It has not scheduled hearings on his nomination.

Republican leaders of the Senate have expressed reluctance to confirm the Democratic president's appointment, preferring to wait until a new president takes office in 2017.

The court's business is proceeding despite the vacancy, Roberts said.

"Most of our decisions are not 5-to-4," he said. "The number that are is pretty small. So the decision process is going on pretty much as it has been."

Supreme Court justices consider themselves relatively anonymous figures, at least to the general public, Roberts said. That changed for him when Scalia's body was brought to the Great Hall -- as the entryway to the court in Washington, D.C., is known -- where visitors were allowed.

"There was a line of people not just around the courthouse, but for a couple of blocks beyond," Roberts said.

Roberts and U.S. Sen. John Boozman, R-Ark., who introduced the chief justice Wednesday, sit on the governing board of the Smithsonian Institution and are personally acquainted.

Gov. Asa Hutchinson, a former U.S. attorney, gave opening remarks at the conference, thanking the attendees for their contributions.

"Usually these judicial conferences are held in St. Louis, Minneapolis or Kansas City," Hutchinson said in an interview after his remarks. "The fact that they came here and that the chief justice came reflects the strength of Northwest Arkansas in tourism and conventions."