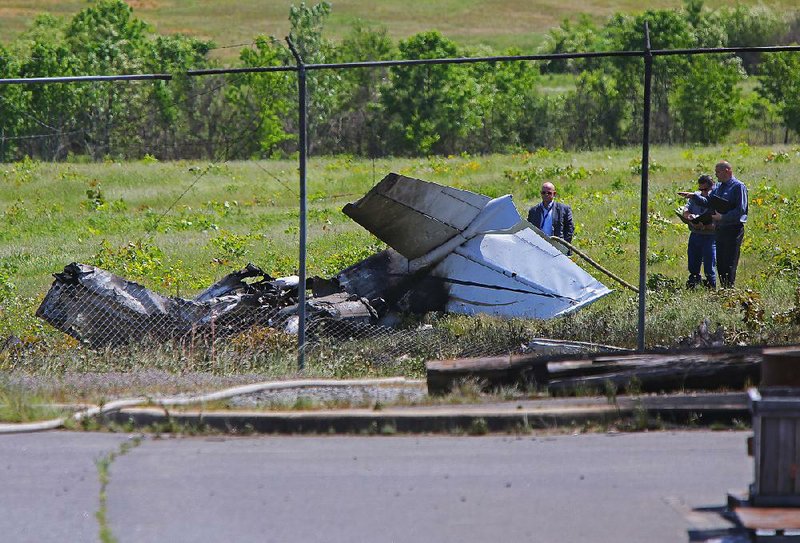 5/5/16 Arkansas Democrat-Gazette/STEPHEN B. THORNTON Investigators walk near the remains of a plane that crashed Thursday and caught fire, killing one and injuring another at the North Little Rock Municipal Airport.

Doyle Reynolds, 56, of Jefferson was killed in the accident while he was conducting a "check-ride," or flight-training session, with Daniel Shure, 30, who was flying the aircraft at the time of the crash to obtain his air transportation license -- the highest-level pilot license under Federal Aviation Administration regulations.

The North Little Rock Fire Department said Shure, of Benton, Wash., had nonlife-threatening burns and was taken to the University of Arkansas for Medical Sciences for treatment Thursday.

Harry Barrett, the owner of Barrett Aviation at the North Little Rock airport, said Reynolds was known for years by people who worked at the airport, though it had been awhile since he was known to do so-called check-rides there.

The Cessna 310 twin-engine aircraft -- a 1961 model -- was frequently rented out for training, Barrett said, and had seen heavy use in the past six months.

"Those airplanes are kept up and mechanics inspected every year -- in this case, every 100 hours," Barrett said. "It was a very capable aircraft."

Shure is a Nevada-based National Guardsman and pilot in the process of getting a commercial airline pilot's license, said Nicholas Franke, who is a part-owner of the aircraft. The pilots planned on departing and returning to the airport as part of the training exercise.

A police report quoted one witness who watched the plane leave the runway and "looked to not have enough power," before it turned back and crashed. The witness then called 911 and ran to the scene and made contact with Shure, who was attempting to provide help to Reynolds.

Two other witnesses told police that when they arrived it was apparent that Reynolds could not be helped, so they instead provided Shure with aid.

The report lists another witness who observed the plane flying at a low speed before making a sharp turn without the landing gear engaged. He then lost sight of it and saw the smoke.

The National Transportation Safety Board began its investigation Friday morning. A spokesman for the board said that all parts of the aircraft have been recovered. The aircraft's engine and propellers will be examined in order to determine whether they functioned properly. The spokesman said that investigators are expected to finish Sunday and release a preliminary report detailing the crash's cause in the next two weeks.

A full report will be released by the board in about a year, the spokesman said.

At the airport's administration office, airport Director Clay Rogers said it was the first fatality in his five years as director. And North Little Rock Fire Chief John Pflasterer said Thursday that it's the first major aircraft accident in roughly 20 years.

But, Rogers said, pilots who regularly fly at the airport were taking the accident in stride.

"Pilots and the people that love aviation know the risks," Rogers said. "That thrill is the part of the appeal."