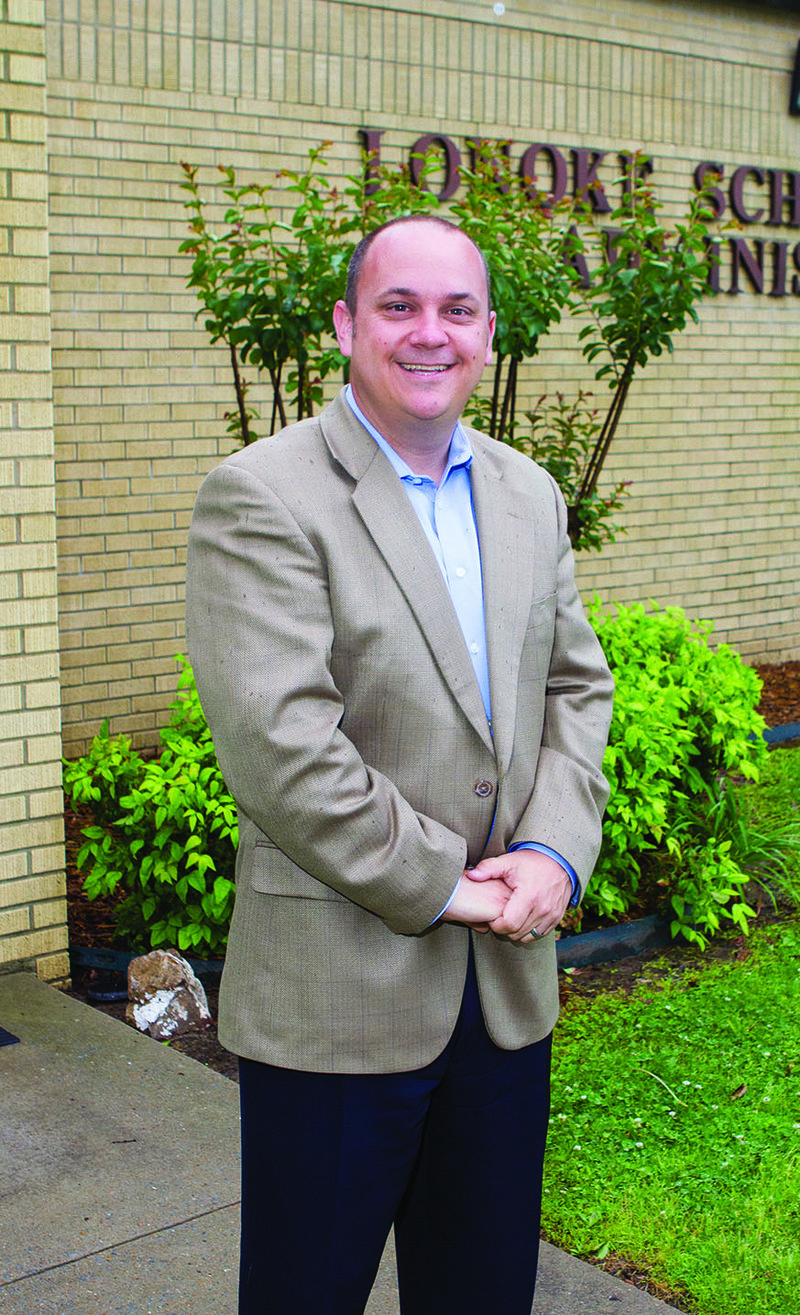 Nathan Morris, the new Two Rivers School District superintendent, stands in front of the central office for the Lonoke School District, where he is currently the director of support services, athletic director and head girls basketball coach. Morris, who has coached for 17 years, including the past 11 at Lonoke, is replacing Jim Loyd, who is retiring at the end of the school year. Morris is a 1994 graduate of Beebe High School. ( Mark Buffalo)

After 17 years as a successful basketball coach, including the past 11 years as a head coach in Lonoke, Nathan Morris has switched gears in his education career.

Morris was recently hired as the new superintendent at the Two Rivers School District, located in Ola. He is replacing Jim Loyd, who is retiring at the end of the school year.

Morris, 40, is currently the girls basketball coach, athletic director and director of support services for the Lonoke School District.

“A couple of years ago, I started my superintendent work to get my license. … That is when the ball started rolling to do this next step,” Morris said. “I think what set that in motion was not only my four years as athletic director, but the last two as director of support services. Being in that central-office, district-leadership role prepared me. It put it into my mind that it was time to start broadening my horizons, so I did it.”

Morris had coaching stops at Dardanelle and Camden Fairview before coming to Lonoke as head girls basketball coach at the start of the 2005-06 school year.

Morris is a 1994 graduate of Beebe High School. He received a Bachelor of Science in Education degree in kinesiology education from the University of Arkansas at Fayetteville in 1998 and earned a master’s degree in the art of teaching from the U of A in 1999.

“I knew during that work that to end my career, district-level leadership is the direction I wanted to go,” he said.

“Nothing has given me greater pride or pleasure,” Morris said of his coaching success.

He said there is a big correlation between coaching a team and leading a school district.

“It’s about being a leader and being in a leadership role,” he said. “For the past 17 years, I’ve been in a leadership role, trying to take a group to the next level and get the most out of all of their abilities. That’s what I will want to do at the next level as superintendent. I want to collectively get all parts of the district, from support to teachers to students to school board to all realms of the district and the communities, and form that team and build on the team that they already have.”

Increasing student achievement will be his top priority, Morris said, “but through a team atmosphere.”

“He seems like a people person,” Morell said of Morris. “We researched him. He’s a very intelligent man. We’ve come a long way with our school and want to continue to be positive. We thought he was the best candidate for the position.”

Morell said there were approximately 20 applicants for the position, and the board interviewed seven.

“We thought he would stay around,” Morell said of Morris. “We want someone to stay around and help us build. We want to keep our district going forward.”

While most superintendents have been a building principal during their career, Morris has not.

“It’s very fortunate that I was looking at the right time,” he said. “I was what Two Rivers wanted, and they are what I wanted. So, I think it’s a great fit.”

Morris said he embraced the fact that he had not been a principal during the interview process with the Two Rivers School Board.

“The people that they could have interviewed who were principals might not have had the district-level leadership that I was experienced in,” Morris said. “I take that as a positive. And shortcomings that I have, nobody will outwork me in making them better.”

Morris said that in the first year of any endeavor, anyone must work hard to overcome any shortcomings.

“It’s not different than first- or second-year coaches, teachers and principals,” he said. “But through a good team concept and putting everybody who is a part of that district on the same team, everybody is going to know their role, me included. Maybe the lack of a couple of years as a principal won’t be a downfall at all.”

The day that Morris interviewed with the Two Rivers board, he and his wife, Devon, drove around the district, which includes the former districts of Ola, Plainview, Fourche Valley and Casa.

“We drove around for an hour and a half,” Morris said, “just trying to get that extra feel before I ever went into the interview.

“I had a good visit with the board. I got a good feel of what they wanted. The board president (Morell) called back the next day. We visited a little bit more about what I thought and what they thought. They made their decision about a week later to offer me the job.”

Morris said he has visited the school district a few times since his hiring in late March and will be there during the Two Rivers board’s May meeting.

Morris said he has met with the principals in the district, including Mary Lawrence at the elementary school, David Minnie at the junior high and Barry Fisher at the high school.

“I got a real good feeling with them,” he said. “I met with the food-service staff. I’ve been up and down the halls. I haven’t got to meet everybody, but I’ve met a few new ones each time.

“I’m a people person. That is what I’m looking forward to, which is building those relationships and meeting people and doing what I did here [in Lonoke]. I’ve got to believe that part of my success here at Lonoke was due in part to the relationships that I’ve had.”

Morris said he wants to build a good relationship with the community, the patrons, the parents and students in the Two Rivers School District.

“The whole spectrum — I want to get in and roll my sleeves up and get to meeting people and get to work,” he said.

Morris said he had a love of education early in his childhood.

“I never missed school,” he said. “I loved school. I remember getting early to school. I was involved in all the sports and all the clubs. I had great teachers who I really respected and loved to see what they did and the passion that they had. I had two or three of those.”

Morris said his dad, David, asked why he didn’t want to be a doctor or a lawyer.

“I said, ‘Dad, I want to teach and coach,’” Morris said. “In college, I couldn’t think of anything other than going through all the kinesiology classes. That was my path. I

never thought of anything else.”

During his first year at Lonoke, Morris’ Lady Jackrabbits won a tournament at Searcy High School. At that point, Morris’ father knew his son had made the correct career choice.

“My dad told me after the Searcy tournament win, ‘Forget about what I said about being a doctor or lawyer. … You’re doing what you’re supposed to be doing,’” Morris said. “I knew then that I was doing the right thing, but I believed all along that I was.

“I couldn’t imagine doing anything else but education. I can’t imagine going to work for eight hours a day and sitting behind a desk. I couldn’t imagine being in a factory in one spot. I like getting out with the people and helping kids be better prepared for the future. There has been no other thing I can think of that I would have ever done than be in education.”

Morris looks forward to working as a superintendent, but also admitted that he will miss coaching.

“I miss it right now,” he said. “That’s never going to leave. I’ll really miss it in November. There is no doubt. There are ways to still be involved. I’m not going to not be at games. I’m not not going to cheer on the kids of the Two Rivers School District. There won’t be a day that I don’t pick up the paper and see how the kids back at Lonoke are doing.”

Morris said life is about challenges.

“Winning ball games was a challenge,” he said. “Getting kids to go toward a common goal and being better people was the main goal. The wins were another one. But now, there are other challenges. Leading a school district is the next challenge.”