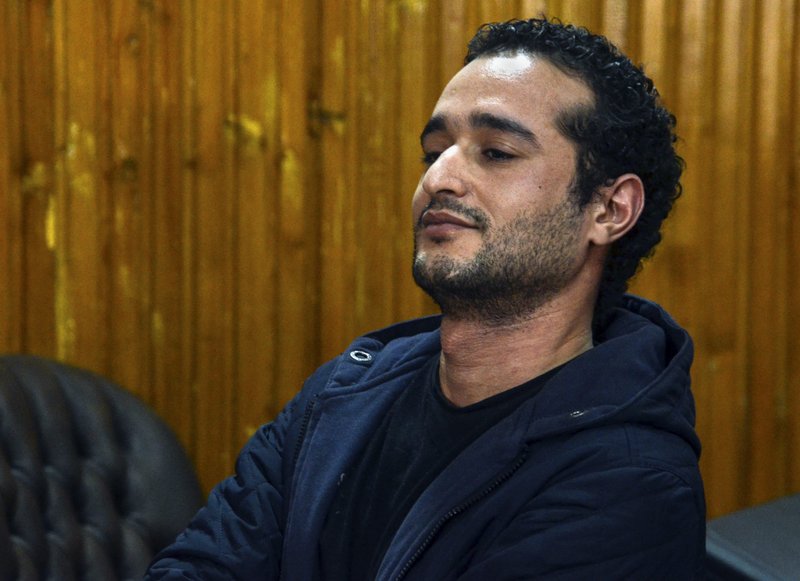 In this Wednesday, Feb. 4, 2015, file photo Ahmed Douma, one of the leading activists behind Egypt's 2011 uprising, attends a court hearing in a case against 230 people including Douma, for taking part in clashes between protesters and security forces, in a courtroom of Torah prison, Cairo, Egypt.

CAIRO -- An Egyptian court on Saturday recommended the death sentence against six people, including two Al-Jazeera employees, accused of passing documents related to national security to Qatar and the Doha-based broadcaster during the rule of Islamist President Mohammed Morsi.

In addition, a verdict on Morsi, ousted by the military in July 2013 after a year in office, and four other defendants in the case will be announced June 18, Judge Mohammed Shirin Fahmy said. Morsi's co-defendants include two top aides from his tenure in office.

The two Al-Jazeera employees -- identified by the judge as news producer Alaa Omar Mohammed and news editor Ibrahim Mohammed Hilal -- were given recommended sentences in absentia along with Asmaa al-Khateib, who worked for Rasd, a media outlet widely suspected of having links to Morsi's Muslim Brotherhood. The Brotherhood was banned and declared a terrorist group after Morsi's ouster.

Mohammed and Hilal, who are not in Egypt, would be retried if they surrendered to Egyptian authorities.

"Al Jazeera media network rejects the absurd allegations that [Mohammed and Hilal] were in collaboration with the elected government of Mohammed Morsi," a spokesman for Al-Jazeera said in an email to The Associated Press.

Egypt's relations with Qatar have been fraught with tension since the ouster of Morsi, who enjoyed the support of the tiny but wealthy Gulf state. Egypt also accuses Al-Jazeera of airing news coverage of Egypt and elsewhere in the Middle East that favors militant Islamic groups.

Mohamed Fahmy, an Egyptian-born Canadian, and Egyptian Baher Mohammed were arrested in December 2013. They were sentenced last year to three years in prison for airing what a court described as "false news" and coverage biased in favor of the Muslim Brotherhood.

The prosecution of the two, along with Australian Peter Greste -- deported in February last year -- drew strong international condemnation.

Their long-running trial was entangled from the start with the wider political enmity between Egypt and Qatar.

The three other defendants for whom death sentences were recommended Saturday are documentary producer Ahmed Afify, EgyptAir cabin crew member Mohammed Keilany and academic Ahmed Ismail, according to Saturday's verdict.

The judge said case documents pertaining to all six would be sent to the grand mufti, Egypt's top Sunni religious authority, for his review.

The mufti's opinion, however, is not binding, and the six will be sentenced June 18.

In a separate development Saturday, an appeals court rejected a request by the lawyers of a prominent activist to suspend his life sentence pending the outcome of his appeal of his February 2015 conviction.

Ahmed Douma, 27, was one of the leading secular activists behind the country's 2011 uprising against autocrat Hosni Mubarak and was later a fierce critic of the Muslim Brotherhood during Morsi's rule. He was sentenced to life in prison last year for taking part in clashes between protesters and security forces in late 2011.

His life sentence is the heaviest to date for any of the secular activists who spearheaded the 2011 uprising.