'League of Their Own' team reunites at Arkansas film festival 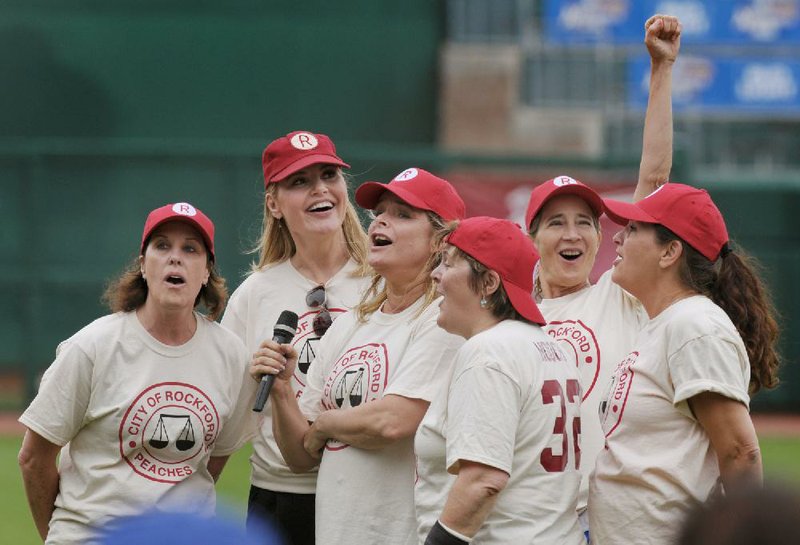 Actors, including Geena Davis (second from left), who played members of the Rockford Peaches baseball team in A League of their Own, sing the team’s fi ght song during the Bentonville Film Festival’s reunion softball game Sunday in Springdale. The other actors are (from left) Patti Pelton, Freddie Simpson, Megan Cavanagh, Anne Ramsay and Tracy Reiner.

SPRINGDALE -- The bond among the stars from A League of Their Own remains strong almost 25 years after the film was released.

"It's 20 years later and we're still playing," said Patti Pelton, who portrayed Marbelann Wilkenson in the film, which chronicled an all-women's baseball league established in the 1940s. "It's great to be here. It's a gift that keeps on giving."

"This event was so popular last year that we decided to do it again," said Geena Davis, co-founder of the festival. "And I'm so thrilled to have six of my Rockford Peaches castmates attending the game this year."

Davis portrayed catcher Dottie Hinson in the movie. Davis didn't play this year, but she managed the blue team.

Hillis hit two inside-the-park home runs. On the second, he jogged home backward from third base.

When the game started to get lopsided, Cavanagh -- manager of the red team -- stormed the field, tossed her hat and kicked some dirt on the home plate umpire.

ESPN reporter and espnW.com columnist Sarah Spain served as play-by-play announcer. When the blue team opened a large lead over the red team, composed mostly of local executives and cast members, Spain questioned whether the two teams were playing "slaughter ball" instead of softball.

Spain drew more laughs from the crowd when she started ticking off potential names for the red team. They included Bleeding Hearts, Seeing Red and The Team Wal-Mart Paid to Beat.

In the later innings, Gina "Chirpie" Casey made a plate appearance. Casey was 13 when the All-American Girls Professional Baseball League formed in 1943. She played for the league's minor-league affiliates in the 1950s.

After a handful of practice swings, Casey belted an inside-the-park home run. She was mobbed by her team at home plate as the crowd burst into cheers.

Despite the lopsided score, Steven Shryock said everyone "had a wonderful time."

"It was a fantastic event," said Shryock, a senior national account manager for Mars Chocolate who played for the red team. "It's a great thing for the community as well as [the film festival]."

After the game, Davis thanked the fans for their hospitality during the six-day festival and promised an even bigger event next year.

"We've had the best time," she said. "Everybody loves Bentonville. Obviously we'll be back again next year. And it's all because of your incredible support."

Print Headline: League of Their Own team reunites at film festival