WASHINGTON -- The White House and Democrats are pressuring congressional Republicans to act on President Barack Obama's demands for money to combat Zika, but the onset of mosquito season has not fostered a sense of urgency. 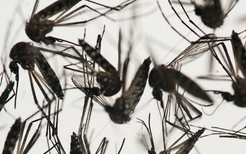 INTERACTIVE: All about the Zika virus

Republicans from states at greatest risk, such as Florida, Texas, Louisiana and Georgia, have been reluctant to endorse Obama's request for $1.9 billion to battle the virus, which is believed to cause birth defects. The Centers for Disease Control and Prevention has reported more than 470 cases in the continental U.S., all associated with travel to Zika-affected areas.

Aides to GOP lawmakers said they haven't heard from many constituents, though they said that could change.

On Monday, the National Governors Association weighed in, urging the administration and lawmakers returning to Washington "to work together to reach agreement on the appropriate funding levels needed to prepare for and combat the Zika virus."

"Any time there's a public health issue, bordering on crisis, there's obviously some urgency," said Rep. David Jolly, R-Fla., who's running to replace Republican Sen. Marco Rubio. Jolly added, however, that "I don't know that it has become a political issue in Florida as much as it has inside the Beltway."

One supporter of immediate action, however, is Rubio, who's leaving the Senate after his presidential bid.

"It is just a matter of days, weeks, hours before you open up a newspaper or turn on the news, and it will say that someone in the continental United States was bitten by a mosquito and they contracted Zika," Rubio said in an April 28 speech on the Senate floor. "When that happens, everyone is going to be freaked out. ... This is going to happen."

Thus far, Rubio's stance on Zika is not widely shared, though Sen. John Cornyn, R-Texas, drew attention when he told reporters in Houston last month that "the risk of underreacting is really too high to take any chances."

"Sometimes the wheels of Congress move very slowly," said Cornyn, the Senate's No. 2 Republican. "But we want to make sure we're not writing blank checks."

One reason for the slow pace may be Ebola, which affected far fewer people but created more public fear than Zika has.

Congress approved $5 billion to battle Ebola in 2014 and about half of that money is unspent, though the administration has plans to use it to help less-developed countries build up their health care systems.

In April, the administration bowed to pressure from Republicans and diverted almost $600 million in previously approved funds, including more than $500 million in remaining Ebola money, toward fighting Zika. That has bought time for Republicans to seek more details on the issue.

"We are still waiting for answers from the administration to basic questions, such as what is needed right now, over the next five months, to fight Zika," said Rep. Ander Crenshaw, R-Fla.