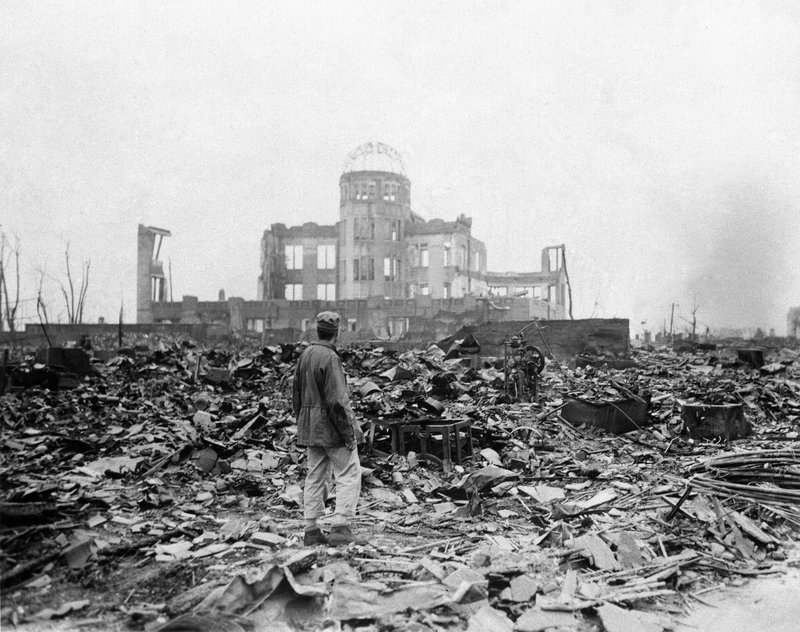 In this Sept. 8, 1945, file photo, an allied correspondent stands in front of a building that once was a movie theater in Hiroshima, Japan, a month after the first atomic bomb ever used in warfare was dropped by the U.S. on Aug. 6, 1945.

WASHINGTON -- On May 27, President Barack Obama will become the first sitting U.S. president to visit Hiroshima, where seven decades ago the U.S. dropped the devastating atomic bomb that ushered in the nuclear age.

By visiting the peace park near the epicenter of the 1945 attack, the president hopes to reinvigorate efforts worldwide to eliminate nuclear weapons, the White House said, while emphasizing that Obama will not go bearing an apology.

Deputy national security adviser Ben Rhodes said: "He will not revisit the decision to use the atomic bomb at the end of World War II." Instead, Rhodes said in a statement, Obama will spotlight the toll of war and offer a "forward-looking vision" of a non-nuclear world.

Japanese Prime Minister Shinzo Abe, who will accompany Obama on the visit, said no apology is expected or necessary.

The visit to Hiroshima Peace Memorial Park will occur after Obama attends a previously announced meeting of the Group of Seven leaders in Ise-Shima.

The U.S. attack on Hiroshima on Aug. 6, 1945, killed 140,000 people. A second bomb, dropped on Nagasaki three days later, killed 70,000. The bombings scarred generations of Japanese, both physically and mentally, but many Americans believe the bombings hastened the end of World War II and saved countless other lives. Japan announced its surrender on Aug. 15.

As for Obama's visit, the Japanese people are ready for this moment, seven decades in the making.

Survivors, especially, have long been waiting. The number of survivors who are recognized as "hibakusha" and entitled to medical assistance from the Japanese government was more than 183,000 as of March. Their average age is now older than 80.

"The day has finally come," said 91-year-old Sunao Tsuboi, a survivor of the bombing and head of a survivors group in the western Japanese city.

"We are not asking for an apology," Tsuboi told Japan's NHK television. "All we want is to see him lay flowers at the peace park and lower his head in silence. This would be a first step toward abolishing nuclear weapons."

The president's visit follows one by John Kerry, who in April became the first U.S. secretary of state to visit the memorial.

Hiroshima Mayor Kazumi Matsui praised Obama's plan as a "bold decision based on conscience and rationality" and said he hopes the president will listen to survivors' stories. Nagasaki Mayor Tomihisa Taue said the president would "send a powerful message, in his own words, toward achieving a world without nuclear weapons."

White House spokesman Josh Earnest said it was "entirely legitimate" for historians and the U.S. public to debate whether President Harry Truman's decision to drop the bomb was the right thing to do.

Anti-nuclear groups said a powerful presidential message was not enough: The president who delivered a stirring call for a nuclear-free world in a Prague address during the first year of his presidency needs to use his last year to take more specific steps, they said.

The president should "use the opportunity to map out concrete actions the United States and other countries can and will pursue to move closer to a world free of nuclear weapons," said Daryl Kimball, executive director of the Arms Control Association, a Washington-based nonprofit.

The Congressional Budget Office estimated in January 2015 that the administration's plans for nuclear forces would cost $348 billion over the next decade. Others have said it could approach $1 trillion over three decades.

"The plan to rebuild and refurbish every weapon that we have basically sort of throws the gauntlet down, and Russia and China feel like they have to match it," said Lisbeth Gronlund, co-director of the Union of Concerned Scientists' Global Security Program. "He has said really great things but his actions have not really been consistent with his words."

Gronlund's group has called for Obama to scale back the overhaul and reduce the U.S arsenal. Ellen Tauscher, Obama's former undersecretary of state for arms control, said she was "disappointed" that the president didn't push back against Pentagon plans to refurbish components of the U.S. nuclear arsenal in ways that could make it more potent.

Tauscher said she hasn't been persuaded by Pentagon arguments that all of the refurbished nuclear weapons are necessary and that conventional weapons can't achieve some of the same strategies.

There are about 1,900 warheads in the U.S. nuclear arsenal, and under the modernization plan they would be refurbished or replaced, along with the bombers, missiles and submarines that can launch them, to last for the next 30 to 50 years, according to the Arms Control Association.

Earnest told reporters that Obama has "worked aggressively" to sign agreements with Russia to reduce nuclear stockpiles, and that the deal his administration negotiated last year with Iran to unwind the country's nuclear program would "block proliferation."

Information for this article was contributed by Nancy Benac, Mari Yamaguchi and Monika Mathur of The Associated Press and by Toluse Olorunnipa, Kenzo Taniai and Andy Sharp of Bloomberg News.