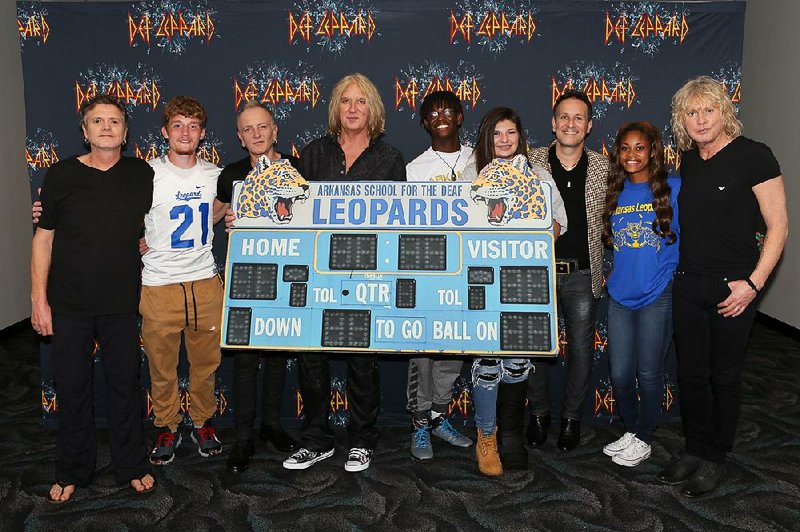 Still all smiles after meeting Def Leppard earlier this week, Arkansas’ Deaf Leopards already have other proposals in mind for the British rock band to return to the Natural State.

“Homecoming, halftime, we need a show,” joked junior Henry James III, one of four students at the Arkansas School for the Deaf to meet Def Leppard on Wednesday after a successful online campaign.

The high school students, for a second time, also invited Def Leppard to visit the school for a campus tour and take a photo in front of a campus scoreboard featuring the school’s leopard mascot.

That proposal was originally on the table as part of a Change.org petition but nixed due to time constraints for the band and its Wednesday performance at North Little Rock’s Verizon Arena.

Sophomore Alex Gossett also welcomed the opportunity to teach band members how to communicate some of their songs — hits such as “Pour Some Sugar on Me” and “Love Bites” — using sign language.

Regardless of whether another meeting could come to fruition, school officials and students alike said they are grateful for the attention and support they received this week.

Ahead of Wednesday’s show, the students created a replica of the scoreboard to hold when meeting Def Leppard before the show.

Backstage at Verizon Arena, the fanfare centered not only on the band but also on the Deaf Leopards, who basked in their newfound fame.

“People were just walking up to us,” James said of their backstage experience. “They saw the banner that we had made and started taking pictures.”

James said it was an honor to be able to represent his school in front of concert attendees and now worldwide, thanks in large part to Def Leppard's post-concert tweet featuring the students.

Junior Stephen Cathcart said he was grinning ear to ear during the meet-and-greet and in the hours after.

“Going into Wal-Mart sometimes, hopefully people will get my autograph,” joked Cathcart.

Principal Ray Boland said the experience represented more than just a simple meet-and-greet for the deaf school's students. It also brought attention to the deaf community and the significance of the Arkansas School for the Deaf, he said.

“The school now has exposure, and now we can communicate and have the opportunity to be equal with other people,” Boland said. “When they met the band, I think it was an honor for them just to see that culture."

Stacey Tatera, director of communications and community relations, said full credit for the meeting with Def Leppard goes to Cary Tyson, a program officer with the Winthrop Rockefeller Institute who created the petition.

Despite not being too familiar with the band before this week, the students said they are now fans.

"It's kind of required," James joked.