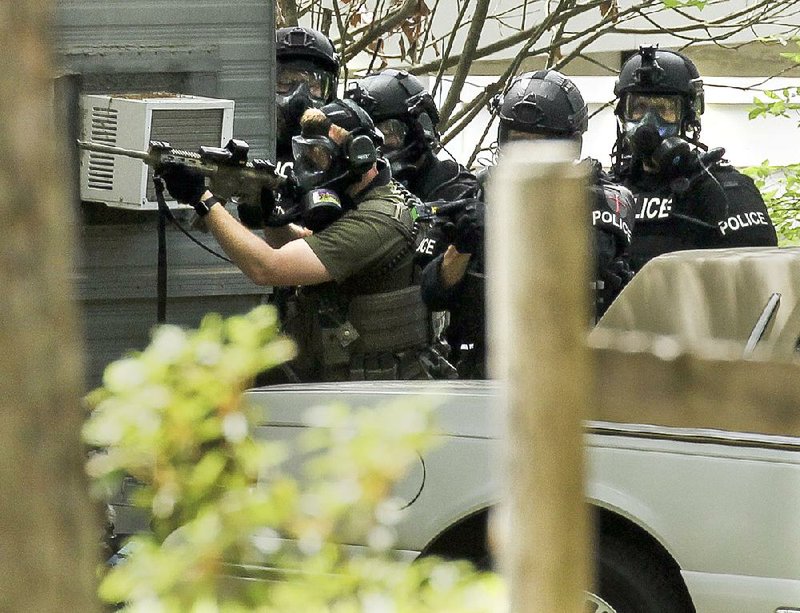 Little Rock police officers urge Jorge Nunez to come out of his ex-girlfriend’s home before they threw tear gas canisters into the building Thursday. ( Benjamin Krain)

A Little Rock man was arrested Thursday after a fight with an ex-girlfriend led to a standoff with tactical police officers. 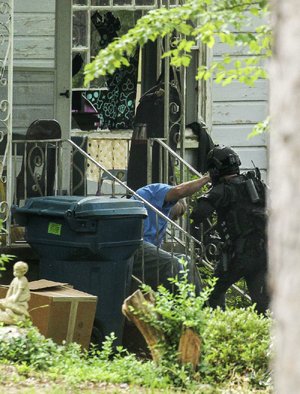 Photo by Benjamin Krain
Little Rock police tactical team members approach Jorge Nunez, 46, outside his ex-girlfriend’s home at 8121 Westwood Ave. after throwing tear gas canisters through a window to force him out and end a two-hour standoff Thursday afternoon. A police officer, responding to a domestic disturbance call at the address, reported seeing Nunez enter the home with a weapon. Nunez then refused to leave, the officer reported. Nunez was arrested and charged with violation of order of protection, aggravated assault and aggravated burglary. 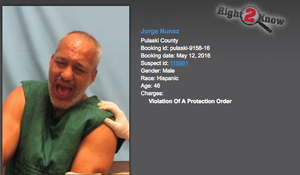 Police were called to a disturbance involving a weapon at 12:47 p.m. at 8121 Westwood Ave., off Manor Avenue south of Colonel Glenn Road. Officers said they saw a man run inside the one-story home. A woman then told police that her ex-boyfriend had showed up at the residence and had refused to leave.

Police cordoned off the area and attempted to speak to the man, but he did not respond, according to police spokesman Lt. Steve McClanahan.

A volley of shots could be heard about 3 p.m. when tactical officers fired chemical gas into the residence. Minutes later, as an officer approached the home with a police dog, the man left the house and surrendered, police said.

Police identified the man as Jorge Nunez, 46, of Little Rock. He was charged with aggravated assault on a family or household member and aggravated burglary.

Michelle Lopez owns the home where the police standoff occurred Thursday, according to property records.

Court filings show Nunez has a criminal history going back 15 years, including convictions for unlawful dogfighting and keeping a gambling house. The current order of protection against him is at least the third filed on grounds of domestic abuse. He's been convicted of aggravated assault and false imprisonment, both felonies.

Nunez's family reported him missing March 16 after he reportedly went to a friend's house and didn't come home. Little Rock police said he was found the next day.

Nunez was being held in the Pulaski County jail late Thursday.