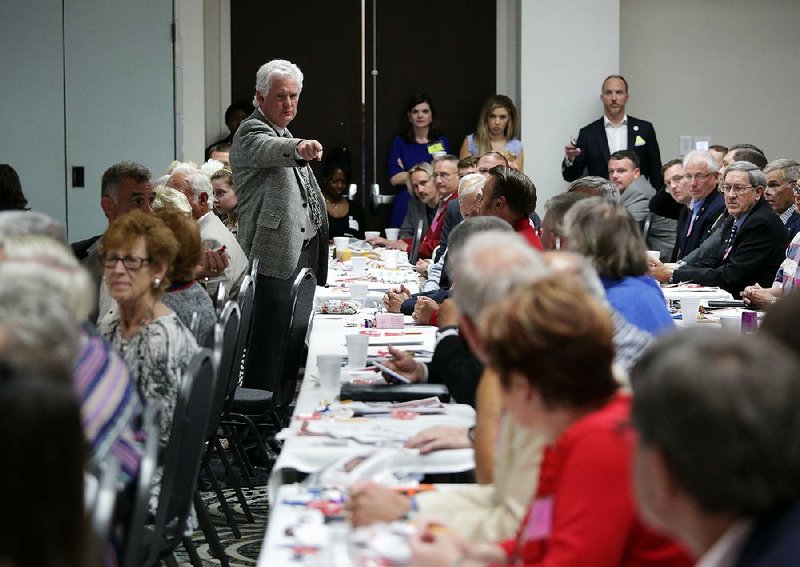 HOT SPRINGS -- With their presidential race settled, GOP activists in the state gathered Saturday to select delegates to the Republican National Convention. 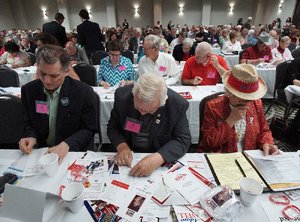 Photo by Mitchell PE Masilun
Members of the state’s Republican committee cast their votes for Donald Trump delegates Saturday during their meeting at the Hotel Hot Springs.

Each candidate's share was based on the results of the March 1 primary, which Trump, the presumptive Republican nominee, narrowly won; the filing period to be a delegate ended Feb. 29.

Darren Morris, Trump's Tennessee state director, was on hand for Saturday's votes and expressed satisfaction with the outcome.

The Trump adviser said he had been to eight delegate selection meetings before the Hot Springs stop, and, "I've got to say this has been the most pleasant meeting out of the nine."

"I don't mean to talk bad about other states that I've been to, but this has been very nice, everybody was very kind," he told the crowd.

Six of the nine Trump delegates chosen Saturday had been vetted and recommended by the candidate's campaign. The other three are longtime party activists who have pledged to back the GOP ticket.

During the 5½-hour meeting, attendees listened to 30-second speeches by more than 100 would-be delegates and alternates.

In between ballots, they got pep talks from elected officials and heard updates from GOP county chairmen.

Instead of arguing over the now-settled presidential primaries, they spent their time bragging about their newfound success in the state.

Lt. Gov. Tim Griffin, a Rubio delegate, said the differences that arose during the primaries are fading as Arkansas Republicans look toward the fall campaign.

Other Republicans sounded a similar theme.

"I don't share Trump's values on a lot of things, but at the end of the day, he's a better candidate than Hillary," Hester said.

Ballinger said Clinton would be "a disaster for our country," adding, "If there's not another alternative out there to keep her from being the president of the United States, then it may be that Donald Trump is the solution."

Throughout the day, would-be delegates for all three candidates promised to support their party's nominee and to work hard to prevent the Democrats from claiming the White House.

Early on, there was briefly confusion because the number of votes cast appeared to exceed the total number of eligible voters in attendance. After conferring and recounting, party leaders decided they had underestimated the number of people entitled to cast votes; the vote was declared valid.

As the meeting dragged on, a hungry delegate cried out, "I move we order pizza," sparking laughter.

The 25 delegates selected Saturday are part of a 40-member delegation. Another 12 Republicans were picked during district conventions last month. Three high-ranking party officials are automatically entitled to cast ballots at the Cleveland convention July 18-21.

Once Saturday's tallies were complete, the new delegates posed for a photo and elected Gov. Asa Hutchinson as delegation chairman.

It's an honor Hutchinson, a Rubio delegate, gladly accepted. "That's something I've always wanted to do."

In an interview, Hutchinson said Trump is the presumptive nominee, but he must focus on unifying Republicans.

"He needs to work hard to bring our party together and to prepare himself for a general election," the governor said.

But the divisions aren't as deep in the Natural State, he said.

"I think there's a good spirit here. I think people are just excited about what we're doing in Arkansas ... and the opportunity to participate in a historic convention," Hutchinson said.

Webb said GOP activists are "coming together" after a "vigorous" primary.

"The state of the party is very good. We are unified to elect the Republican nominee."

"I think everybody here today is ready to play ball and get this show on the road and focus on the general election in November," he said. "These people here want to win the White House and they want to beat Hillary Clinton, so they'll unify."

The delegates elected Saturday in Hot Springs are: