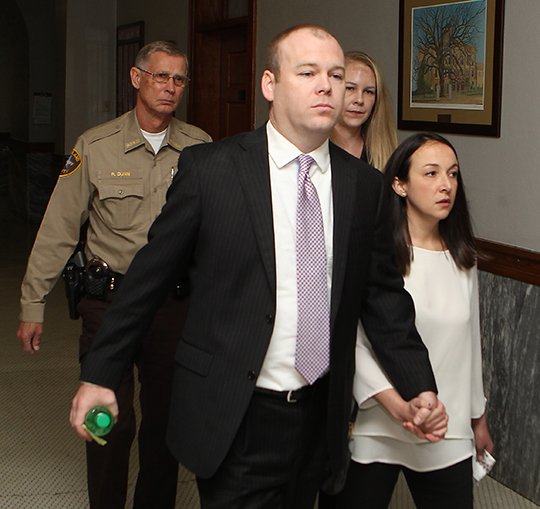 Attorneys for Garland County Circuit Judge Wade Naramore have filed a series of motions seeking to discredit the February decision by prosecutors to charge the judge with negligent homicide in the hot-car death of his son last summer.

In addition to arguing that Naramore's arrest was "unlawful," his attorneys — Erin Cassinelli and Patrick Benca — wrote that prosecutors failed to provide the defense with records and information relating to the case despite two months of email exchanges requesting the files, according to the separate motions filed last week.

On Monday, Cassinelli filed a new motion seeking a "bill of particulars" from prosecutors explaining what actions they believe Naramore took to justify the misdemeanor charge.

The first of last week's motions seeks to suppress any statements or evidence collected following Naramore's Feb. 11 arrest. It cites a lack of probable cause for an arrest. The second motion seeks to compel the state to hand over information requested by defense attorneys, including any data taken from Naramore's cell phone.

According to an arrest affidavit, Naramore told police he discovered his 18-month-old son, Thomas, had been left in the car for five hours after leaving work on July 24.

Police responded to Naramore's 911 calls, and the county coroner pronounced Thomas dead at the scene with an internal temperature of 107 degrees, the affidavit states.

"It does not appear the state has obtained any evidence in case for many months," leading up to Narmore's February arrest, Cassinelli wrote in the second motion.

His attorneys then sent two requests to prosecutors, on Dec. 7 and Dec. 17, asking for advance notice if prosecutors decided to pursue charges against Naramore, according to the second motion.

Court records show that a probable cause affidavit was signed by a Hot Springs police officer on Jan. 13. The arrest warrant was then signed by special Judge John Langston on Feb. 11.

Naramore was arraigned on March 11 in Garland County Circuit Court and pleaded not guilty. Scott Ellington, a prosecuting attorney in Arkansas' 2nd Judicial District, was assigned as a special prosecutor in the case, along with deputy prosecutor Charles Finkenbinder.

During the arraignment, prosecutors provided Naramore's attorneys with "several disks and a stack of materials" related to the case, including 911 calls, Cassinelli wrote in the motion.

The defense followed up on March 11 with a request for additional records, and at least seven additional requests were written to prosecutors in the next two months, according to emails included with the motion.

In response to several emails, Finkenbinder wrote that he has been waiting on the Hot Springs Police Department to provide the files. Naramore does not want a continuance of the trial, Cassinelli wrote in motion, but has the right to request "appropriate sanctions."

Naramore's trial is scheduled to begin June 14, with an omnibus hearing set for June 3.