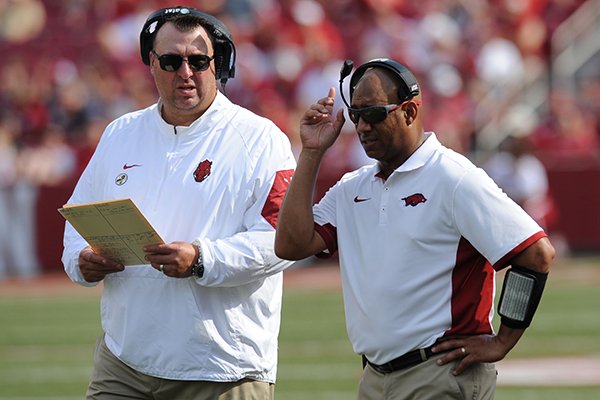 Arkansas coach Bret Bielema speaks with receivers coach Michael Smith against University of Texas at El Paso's Saturday, Sept. 5, 2015, during the third quarter of play in Razorback Stadium in Fayetteville.
More from WholeHogSports

He chose the Hogs over scholarship offers from Colorado State and Troy while also drawing interest from Florida, Georgia, Arizona State, Iowa State, Memphis and numerous others.

He signed with Southern Miss in 2015 out of high school in Gulfport, Miss, but left after being moved to defensive back.

Nance, who plans to graduate in December, recorded 31 receptions for 400 yards and 3 touchdowns last season. He has three years to play two.

He becomes the 9th commitment for the 2017 class.