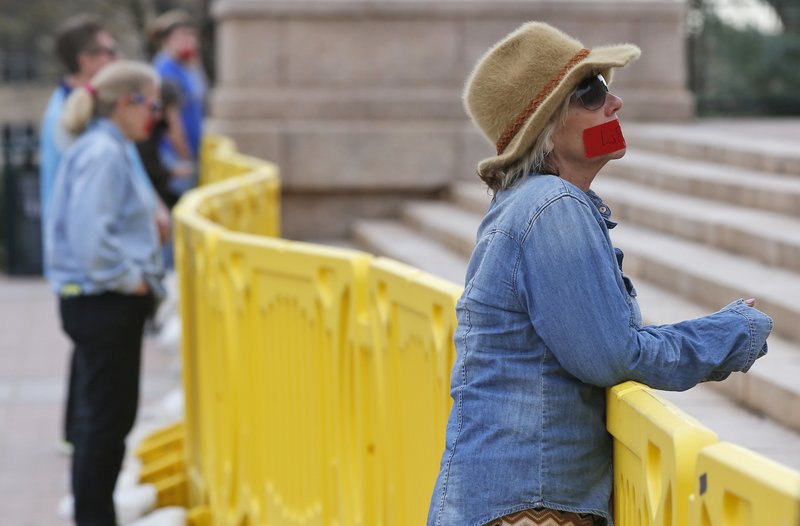 In this March 10, 2016 file photo, Sandy Springer, of Edmond, Okla., stands with other members of Bound 4 Life, an anti-abortion group, at the state Capitol in Oklahoma City.

OKLAHOMA CITY -- Oklahoma lawmakers approved legislation making it a felony for doctors to perform abortions in the state, an effort that the bill's sponsor said Thursday is aimed at ultimately overturning the U.S. Supreme Court's 1973 decision that legalized abortion nationwide.

The bill, which effectively bans the procedure in the state, also would restrict any physician who performs an abortion from obtaining or renewing a license to practice medicine in Oklahoma.

Senate Bill 1552 passed 33-12 Thursday with no discussion or debate; a handful of Republicans joined with Democrats in voting against the bill sponsored by Republican Sen. Nathan Dahm. The bill was passed by the state House of Representatives with a vote of 59-9 last month.

Oklahoma Gov. Mary Fallin, an anti-abortion Republican, has until Wednesday to sign the bill into law or veto it. Spokesman Michael McNutt said she also could allow the bill to become law "without approval" after the five-day period has elapsed. He also said she will withhold comment until her staff has time to review it.

The Oklahoma bill is the first such measure of its kind, according to the Center for Reproductive Rights, which says that other states seeking to ban abortion simply have banned the procedure rather than attaching penalties like this.

Dahm, a Republican, made it clear that he hopes his bill could lead to overturning Roe v. Wade.

"Since I believe life begins at conception, it should be protected, and I believe it's a core function of state government to defend that life from the beginning of conception," Dahm said.

But abortion-rights supporters -- and the state's medical association -- have said the bill is unconstitutional.

Sen. Ervin Yen, an Oklahoma City Republican and the only physician in the Senate, described the measure as "insane" and voted against it.

According to the measure, a person who performs or induces an abortion will be guilty of a felony and punished with between one and three years in the state penitentiary.

This legislation also says any physician who participates in an abortion -- deemed "unprofessional conduct" in the bill -- will be "prohibited from obtaining or renewing a license to practice medicine in this state." Medical licenses, however, will not be stripped from doctors who perform abortions deemed necessary to save the mother's life.

The Oklahoma State Medical Association, which had called the measure "troubling," has said it would not take a position on the legality of abortion as long as the practice itself remains legal. However, the group said it was opposed to "legislation that is designed to intimidate physicians or override their medical judgment."

On Thursday, the group reiterated that opposition, calling it "one more insulting slap in the face of our state's medical providers" and urging Fallin to veto the legislation.

"We are extremely disappointed in today's vote," Sherri Baker, president of the medical association, said in a statement Thursday. "It is simply unconscionable that, at a time when our state already faces a severe physician shortage, the senate would waste its time on a bill that is patently unconstitutional and whose only purposes are to score political points and intimidate physicians across this state."

The new bill "is blatantly unconstitutional and, if it takes effect, it will be the most extreme abortion law in this country" since the Roe v. Wade decision, Amanda Allen, senior state legislative counsel at the nonprofit Center for Reproductive Rights, wrote in a letter to Fallin on Thursday.

Allen also said that the bill would "almost certainly lead to expensive court challenges that the state of Oklahoma simply cannot defend in light of longstanding Supreme Court precedent."

If the bill becomes law, it would go into effect on Nov. 1.

Thursday's vote in the Senate comes as the Oklahoma Legislature nears a May 27 deadline for adjournment and is still grappling with a $1.3 billion budget hole that could lead to deep cuts to public schools, health care and the state's overcrowded prison system.

"Republicans don't have an answer for their failed education policies, failing health care policies and failing fiscal policies, so what do you do in that situation?" said Senate Democratic leader John Sparks. "You come up with an emotional distraction. That's what this bill is."

Nearly every year, Oklahoma lawmakers have passed bills imposing new restrictions on abortions, but many of those laws have never taken effect. In all, eight of the state's separate anti-abortion measures have been challenged in court as unconstitutional in the past five years.

Information for this article was contributed by Sean Murphy of The Associated Press and by Mark Berman of The Washington Post.