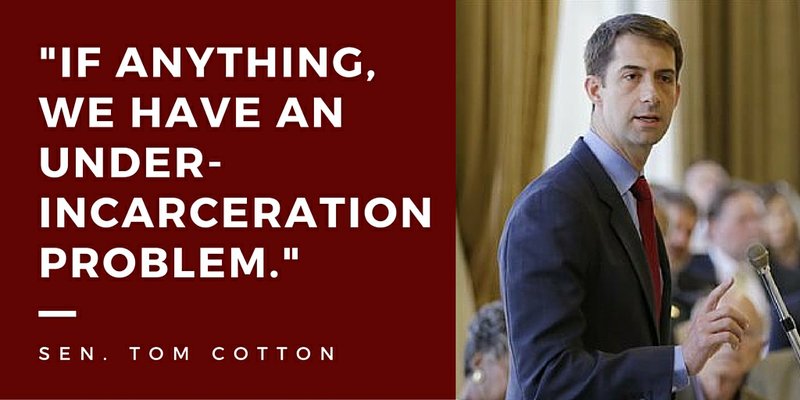 "I believe the criminal-leniency bill in the Senate is dead in this year's Congress," Cotton told an audience at the Hudson Institute, a conservative Washington-based think tank.

In November, the House Judiciary Committee approved the Sentencing Reform Act of 2015, which would cut mandatory sentences on some drug offenses and scale back the "Three Strikes, You're Out" law regarding mandatory life sentences for repeat offenses.

The measure also would give judges greater discretion when sentencing nonviolent drug offenders.

Critics of criminal-sentencing laws say too many people have been locked up, ruining lives and wasting billions of dollars.

But Cotton rejected that premise. "The claim that too many criminals are being jailed, that there is over-incarceration, ignores an unfortunate fact: For the vast majority of crimes, a perpetrator is never identified or arrested, let alone prosecuted, convicted and jailed," he said. "Law enforcement is able to arrest or identify a likely perpetrator for only 19 percent of property crimes and 47 percent of violent crimes. If anything, we have an under-incarceration problem."

Cotton argued that crime rates have dropped because incarceration rates have skyrocketed.

Critics say that some of the sentences are too harsh and would like judges to have greater discretion when handing down prison sentences. Cotton said those pushing for the changes are "criminal-leniency advocates" who favor giving greater discretion to "liberal" "soft-on-crime" judges.

The first-term senator portrayed supporters of the changes as out-of-touch elites, saying those "who have security details and live in gated communities" may not view crime the same way as the rest of society. He referred to the town in New York where Bill and Hillary Clinton have a home and to two other affluent East Coast communities.

"It's easy, after all, to feel virtuous about being soft on crime when you live in Chappaqua or McLean or Woodside. But when you live in Osceola or Trumann or Pine Bluff -- working-class towns in my state where crime has been increasing lately -- you can't afford such woolly-headed abstractions," Cotton said.

The tougher crime policies and stiffer sentences are effective, he said.

Cotton accused advocates of the sentencing-overhaul legislation of having "amnesia" and of attempting to give "liberal judges more discretion" when sentencing criminals. He also criticized the governor of Virginia for restoring voting rights to 200,000 felons and accused others of attempting "to stigmatize law enforcement."

"These policies are not merely wrong. They are dangerous. They threaten a return to the worst days of the 1990s, when law-abiding citizens lived in fear of their lives," he said. "The truth is you cannot decrease the severity and certainty of sentences without increasing crime. It's simply impossible."

But Craig DeRoche, senior vice president of Prison Fellowship, says the system needs to be changed.

Pointing to the same statistics that Cotton cited, DeRoche said via email, "It is dangerous to double down on a government system that only catches 47 percent of the people who commit violent crimes. The Sentencing and Corrections Act improves governmental accountability and shifts the focus from expensive and ineffective incarceration methods to proven practices that hold people accountable and reduce crime."

The data show that the current approach is failing, DeRoche said. "It's hard to imagine members of Congress supporting the status quo if our schools only graduated 47 percent of the kids, or our hospitals only healed 47 percent of the patients," he said.

"Nearly one in four adult Americans has a criminal record. To say a person's worth, particularly after they have repaid their debt, is beneath that of another human being is not in sync with the American or Christian values of redemption, accountability and the value and potential of each human life," he said. "This isn't a matter of whether to punish, but how much. We devalue a person's God-given human dignity when we punish too little --but also when we punish too much."